Is Dallas-Fort Worth Headed for a Recession?

Any downturn will bring pain, but North Texas usually fares better than most.
April 8, 2019|9:57 am

Subscribe
Advertisement
In recent months, a word few business leaders want to hear has been popping up more often: recession. The Dallas-Fort Worth economy remains rock solid, but the cognoscenti are pointing to some worrisome trends elsewhere—months of stock market jitters, slowing growth prospects in China and Europe, and the possibility of escalating trade wars.

Modern economies are intertwined in myriad ways, and experience tells us U.S. and global troubles will eventually find their way here. When it comes to recessions, timing and severity are hard to predict, but corporate leaders shouldn’t ignore the possibility that the good times might be coming to an end—perhaps as soon as this year or next. Getting caught flat-footed can be costly.

While not immune to the swings in the national economy, Texas and DFW have weathered recent downturns better than most other places. Bureau of Labor Statistics data put local job losses from expansion’s peak to recession’s trough at 1.8 percent in 1990, 2.6 percent in 2001, and 3.7 percent in the long and deep Great Recession of 2007-09. The three slumps’ average employment toll of 2.7 percent was third lowest among the 15 largest U.S. metropolitan areas, behind only Washington, D.C., and Minneapolis-St. Paul. Top MSAs hit hardest in the three downturns were Los Angeles, Detroit, San Francisco, Boston, and New York (see chart).

Turning to Texas, the peak-to-trough employment declines were 2.4 percent in 1990, 0.8 percent in 2001, and 3.5 percent in 2007-09. With an average decline of 2.2 percent over the three episodes, Texas job losses were 12th lowest overall and second lowest among the 15 most populous states. Pennsylvania fared a little better than Texas; Massachusetts, Michigan, and New York suffered the most among the big states.

More mature readers will recall that the worst of times in Texas came in the mid-1980s, when widespread carnage followed a collapse in oil prices. Cheaper oil was good news for the U.S. economy, and it shifted into high gear after the 1981-82 recession, while Texas tanked.

Since then, Texas and its major metropolitan areas have diversified their economies, becoming less dependent on the energy sector and more like the rest of the United States. In future recessions, this new Texas economy should mirror the nation as a whole—or so the logic goes. 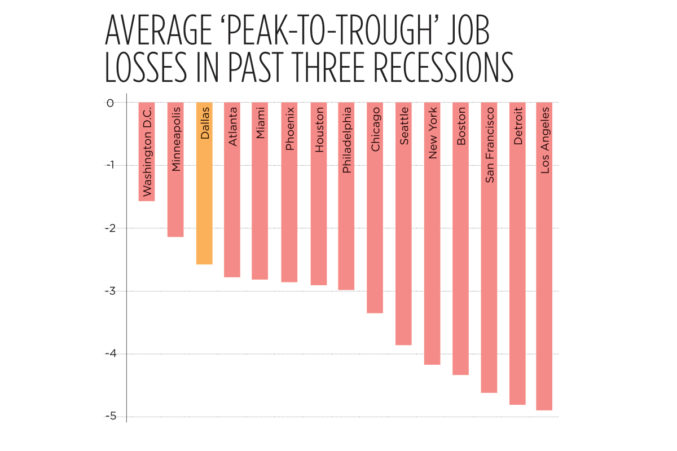 The data we’ve already presented suggest recessions don’t spread evenly across the country. Why should they? Different places have different industry mixes, and recessions clobber some industries while leaving others relatively unscathed.

Looking at a Commerce Department table that breaks down U.S. GDP, only two broad sectors kept growing during the Great Recession—education and healthcare in the private economy and the deficit-spending federal government. They accounted for smaller shares of the economy in Texas than the nation, so the state had less of a buffer.

At the other end of the Commerce Department’s table are sectors hit particularly hard by the Great Recession: construction, wholesale trade, manufacturing, and utilities. Each lost between 14 percent and 26 percent of output; each was more important in Texas than the nation as a whole. The differences were big enough to matter—1 percentage point for manufacturing and 2 percentage points for the three other sectors.

With so little countercyclical help and so many vulnerable sectors, why hasn’t the Texas economy sunk even deeper into recession? Part of it is due to the state’s bright spot in the Great Recession. The overall mining sector shrank nationally, but the Texas-heavy oil and gas part of it did well, making a positive contribution to the state economy. For the nation, financial services took the biggest blow. The sector was slightly less important in Texas than the nation, so the state was spared at least some of the grief.

With its declining share of the state’s economy, the oil and gas industry can’t fully explain the less-severe recessions. This leads to another possibility: More vulnerable sectors must take less severe hits in Texas than they do elsewhere. They go down later and come back sooner. They see smaller declines in business. They shed fewer jobs.

How could this work? Take two businesses producing the same product and facing a U.S. recession. The DFW firm has been operating in an economy with strong growth and a tight labor market. Expecting a rebound, it’s reluctant to dismiss workers because they may not be around when business bounces back. A company in Detroit might jettison employees more quickly, because it’s less optimistic about the future or because it’s fairly certain about rehiring workers.

Vibrant economies and greater economic freedom go hand in hand, so we’d expect less severe recessions where markets are freer, both for businesses and labor. In the latest reports, DFW ranks sixth in economic freedom among the 100 largest MSAs. Texas comes in third among the states. It’s important to find out, however, whether the link between economic freedom and recession holds as a general rule. It does. The most-free group of 20 MSAs had job losses of 2.7 percent in the three recessions since 2000, compared to 4.1 percent in the least-free group of 20. The most-free states’ employment declined 2.5 percent, with the least free at 3.2 percent.

Maybe the next recession isn’t just over the horizon, but one will arrive at some point in the future. Our review of recent downturns provides some reassurance that, whenever the next one comes, it probably will once again be easier to bear here than in many other parts of the country.