Arun Agarwal is standing in the middle of his 25,000-square-foot, cross-dock warehouse in the Dallas Design District. Big fans are pushing the hot July air around in the giant facility, whose ceiling soars 24 feet high. It’s here, Agarwal is saying, that 18 containers will arrive in three days with home goods bound for Belk, the U.S. department-store chain.

The 18 containers will be unloaded by Agarwal’s employees and then “palletized”—the goods stacked and wrapped on individual wooden pallets—before being trucked out to Belk’s multiple distribution centers, and then to its roughly 300 stores in 16 states two days later.

Which is why Agarwal, the CEO of a half-billion-dollar company (annual revenue) that sells home textiles like sheets, towels, and pillows, contends that he’s not really in the home products business at all. “I’m in the supply-chain business,” he says. The key element for success in his business isn’t just delivering quality products, he explains, but delivering them on time.

Agarwal, CEO and director of Dallas-based Nextt, has been delivering quality products on time for a while now. The India-born entrepreneur provides the likes of sheets, pillow covers, quilts, and comforters to a variety of leading U.S. retailers. Besides Belk, Agarwal’s customers include Walmart, Neiman Marcus, J.C. Penney, Tuesday Morning, Dillard’s, Kohl’s, Bloomingdale’s, and Costco. Among Nexxt’s well-known brands are Raymond Waites and Royal Sateen. The company has about 90 employees and a showroom/design studio on New York’s Madison Avenue, in addition to its headquarters and distribution center on Oak Lawn Avenue, a few blocks west of Irving Boulevard. 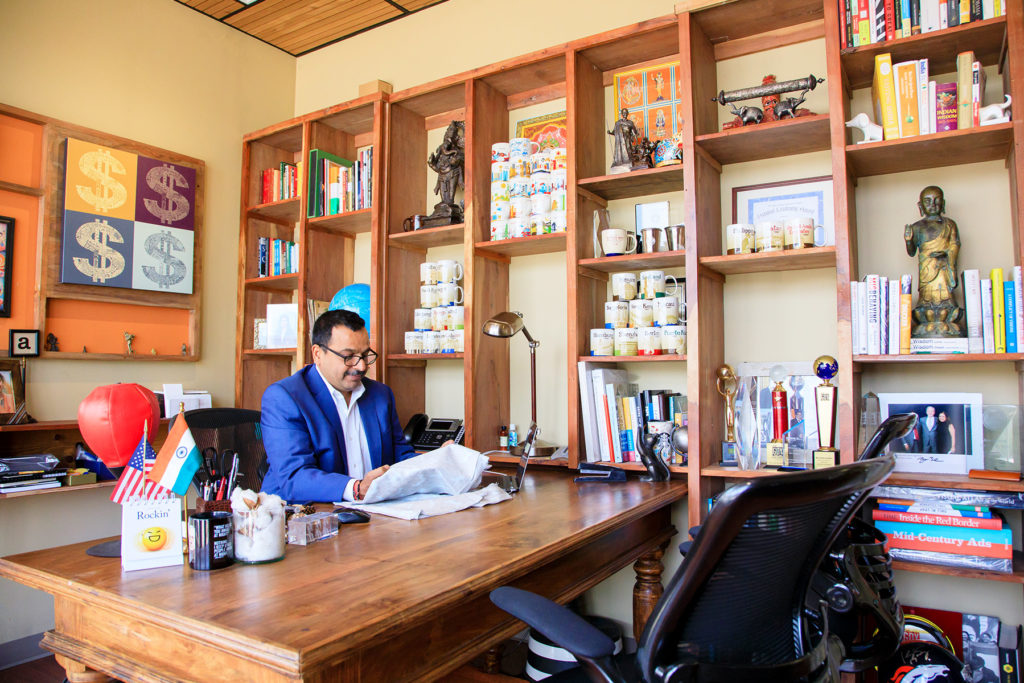 His business has had its share of ups and downs since he founded it in 2008. But Agarwal’s innovation and flexibility have kept it competitive and successful. “My life has not followed a business plan,” he says. “I’ve followed my instincts.”

Take, for example, the way he’s navigated around the travails of his main products supplier, a Mumbai, India-based, integrated textile manufacturing behemoth called Alok Industries Ltd. Agarwal hooked up formally with Alok in 2008 and, until 2014, his company—known then as Alok International—was the U.S. marketing subsidiary of Alok Industries. But Agarwal says he came to sense trouble ahead for many Indian companies that became highly leveraged in the 2000s.

As a result, Agarwal “legally separated” from Alok Industries four years ago, and his Dallas company changed its name to Nextt. The legal separation, Agarwal says, “was the smartest thing I could have done.” Indeed, Alok Industries was identified by the Reserve Bank of India for bankruptcy proceedings last year after defaulting on its loans. In June, however, Alok lenders reportedly OK’d a plan for Reliance Industries, a huge Indian conglomerate, and JM Financial Asset Reconstruction Co. to buy Alok for about $737 million. Alok Industries is continuing to operate, Agarwal says, and still provides Nextt—now Alok’s “exclusive front-end marketing arm”—with up to 70 percent of its product. “I’m only going to gallop” as an independent company, he says.

In a similar manner, Agarwal responded intuitively when the price of cotton—the key material in all his products—began skyrocketing around 2011, partly because of inflation and rising demand from China. “I couldn’t increase my prices to Walmart,” he says. “So I thought, why not put polyester in the cotton?”, a move that would reduce costs. Agarwal worked with Alok Industries and, in 2015, was awarded a U.S. patent for a distinctive new product called Alpha Cotton.

Business is evolution, Agarwal says. “We’re in a good time, an exciting time. But if you don’t keep your eye on the ball, there can be a very fast vanishing act.”

Reared in Jaipur, India, the 46-year-old chief executive says he learned many lessons applicable to business from his grandmother, even though she was a “housewife,” not a businessperson. Education opens your mind, Sajjan Agarwal would tell Arun. And: Cash flow is like blood; the moment that blood stops flowing through your body, you’re dead. Plus: Never push people beyond their stress points. Also: Good energy has its own way of working; a hidden hand will come and help you. That’s also known as karma.

Agarwal earned a B.S. degree at Maharajas College in Jaipur, then an MBA at the Institute of Management Technology at Ghaziabad, Uttar Pradesh, India. He and his now-wife, Anu, immigrated to America after Agarwal—encouraged by Anu to seek a master’s degree in computer information—was accepted at Southern New Hampshire University. After he became a naturalized U.S. citizen in 2002, the couple moved to Dallas, where Agarwal landed a computer analyst job. He hooked up with Alok in 2008, first as a salesman and then as CEO of the company’s U.S. subsidiary.

Andrew Newsom, president of Farmers Branch-based Wisteria, which sells furniture, décor, and home accessories, says he began working with Agarwal years ago. “Importing from India can be rather complex, and I always felt Arun was a true partner in solving the issues we faced,” he says. “No matter what the problem was, Arun was fair.

“I’m only going to gallop” as an independent firm.”

“I think one of the key reasons that he is such a successful businessman is that he is humble,” Newsom goes on. “… When he started, I don’t think his ultimate goal was to be financially successful, but rather to do a good job for his customers today, and to do a better job tomorrow. It wasn’t about the money so much as it was about trying to get better each and every day. He started out treating others fairly and honestly and has continued doing that.”

Along the way, Agarwal has bolstered his success with Nextt by amassing something of a real estate empire, and also by becoming one of the state’s leading advocates for Indians and Indian business. In 2016, he was appointed by Gov. Greg Abbott to the state’s Product Development and Small Business Incubator board. Agarwal was the first Indian appointed to the board, which oversees a revolving loan program for new or improved products developed by the state’s small businesses.

Earlier this year, the Nextt CEO served as chairman of a nine-day trip the governor took to India to drum up jobs and business for Texas. Agarwal, who’s known Abbott since his days as Texas attorney general, says he facilitated a number of meetings between Indian companies and the governor, who called the trip “a home run.” In Bengaluru, India, during the trip, Abbott announced that Wipro Limited, one of India’s biggest IT companies, would open a new Texas Technology Center employing 150 in Plano. “Texas and India have a very strong relationship,” Agarwal says. “Texas is becoming the new IT capital for India. All the major IT providers are opening up in Dallas: Tata, Infosys, Tech Mahindra.” 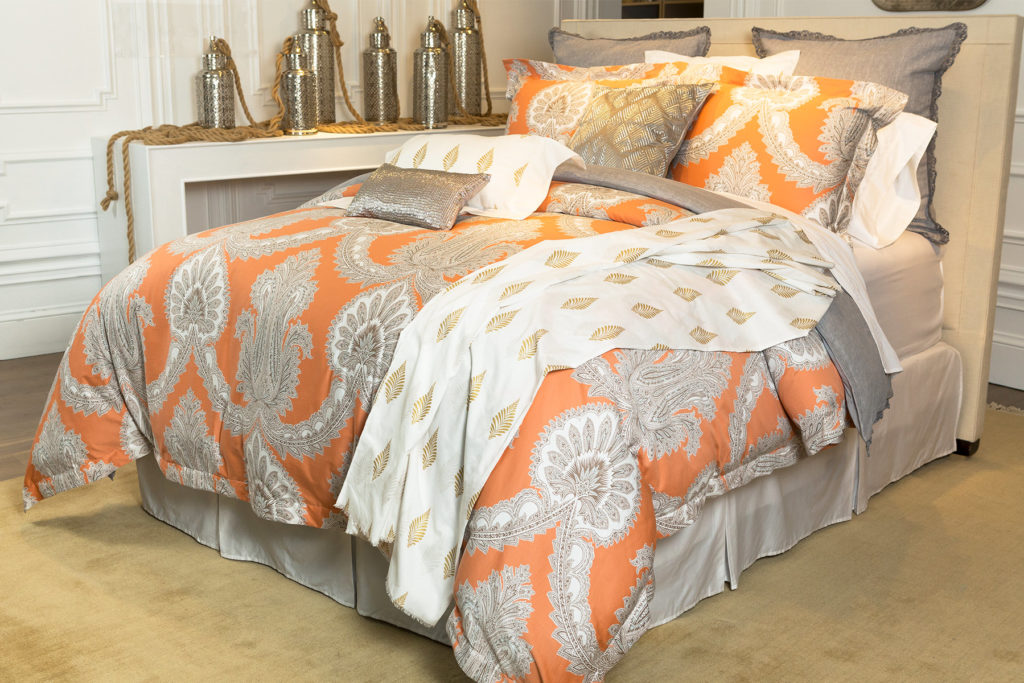 The bedding here is by Raymond Waites, one of Nexxt’s brands.
Courtesy of Nexxt

In the Design District, Agarwal has expanded his real estate holdings beyond the Oak Lawn Avenue office/warehouse, which he bought in the early 2000s. That was long before the district’s current renaissance as a mecca for art galleries and restaurants, back when it was still replete with bail bondsmen, topless bars, and seedy liquor stores. In the intervening years he’s snapped up as many as a dozen Design District warehouses, some of them financed by Trinity Capital Bank of Texas-Dallas.

Bramlet Beard, president and CEO of Ennis-based Ennis State Bank, Trinity Capital’s parent, says Agarwal was one of the first customers at the bank’s Dallas branch on Riverfront Boulevard, which opened in 2012. “His interest in other people, and his ability to work with very different people and different backgrounds in different settings, and make everyone feel comfortable and included” make Agarwal a “remarkable businessman,” Beard says. “He can fly to India, work for 24 hours and fly back, and still function!”

Inside his cool, dimly lit office on Oak Lawn, the Nextt CEO was explaining the décor on the wall behind his wooden desk one recent day. There’s a carving that depicts Ganesha, the popular Hindu god with an elephant’s head, he said. Ganesha is humble and benevolent. Beneath him is a portrait of Lakshmi, the Hindu goddess of wealth, fortune, and prosperity. Not far away, there’s another portrait of the Hindu goddess Kali, the Divine Mother and destroyer of evil forces. There’s also one of Saraswarti, the goddess of knowledge.

The dominant piece on the wall behind Argawal’s desk, though, isn’t religious at all. It’s a very modern illustration showing a colorful panel of four giant dollar signs—perhaps so he doesn’t forget his grandmother’s lesson about cash flow.