Net income climbed a median 24 percent at Dallas-Fort Worth middle market companies—and the chief executives running them were handsomely rewarded. Those are among the findings of D CEO’s annual executive compensation report, which looks at companies with annual revenue of $150 million to $1.5 billion. Combined, the 50 DFW-based companies on this year’s list generated a total of more than $31 billion in revenue.

For the ninth straight year, research was conducted by Paradox Compensation Advisors, a Dallas-based consulting firm. The analysis looked at total compensation (base salary, annual bonuses, and long-term incentives, such as stock options and stock awards), along with revenue and net income. The information is based on the most recent full fiscal year, which for four of the companies is 2018. To be included, the company’s CEO had to be in place for the full fiscal year (or sufficient information was provided to project full-year pay). 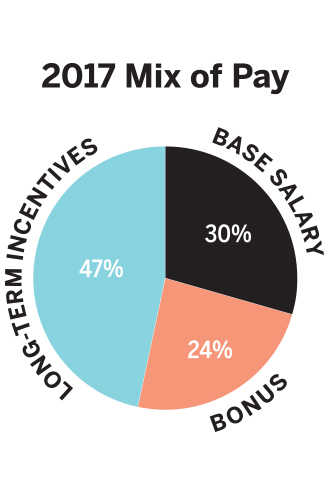 As one might expect, CEO pay rose substantially. The median increase in total direct compensation was 9 percent, the largest in the nine-year history of the study. Oil and Gas continues to be the highest-paying industry for CEOs among DFW middle market companies. No one had a better year, percentage-wise, than Holly Energy Partner’s George Damiris, who received a 338 percent increase in total compensation from 2016 to 2017, going from $452,187 to nearly $2 million.

Two industries—Technology and Financial Services/Real Estate —increased median CEO pay by double digits (30 percent and 45 percent, respectively). The median compensation change in Technology was driven by CEOs at all but one company seeing a bump in pay. The increase to Financial Services and Real Estate total compensation improved the industry’s ranking from fifth-highest-paying in the prior fiscal year to third-highest in the most recent fiscal year.

Still, compensation for the most recent fiscal year appears to be a story of the haves and the have-nots. Despite the overall median increase of 9 percent, CEO pay actually decreased in a number of industries (Business and Professional Services, Retail, Consumer Products and Services, Healthcare and Health Services, Other Manufacturing, and Oil and Gas). On average, base salaries for middle market CEOs rose by 8 percent in 2017, more than twice the increase for the average employee. Meanwhile, annual bonuses increased by 25 percent, with all but four companies awarding them. “Bonuses are most frequently related to increases in profitability and/or revenue,” Cameron says. “So, in a stellar year, increases to bonus awards are to be expected.”

The median increase in long-term incentives during the last fiscal year was 6 percent. In the years since D CEO began the study, more middle market companies award long-term incentives regularly to the CEO, and the percent of total pay associated with these vehicles (stock options, stock awards, etc.) has grown to an average of 47 percent.

As data below reveal, total compensation for the last fiscal year, top to bottom, ranges from $14.9 million for Six Flags Entertainment CEO James Reid-Anderson to $405,000 for Alfredo (Al) Bala at Mannatech.