North Texas is a mecca for golf and a center for innovation. So, it’s no surprise that a movement combining the two is led by a Dallas legend and a business leader with deep local connections.

Although they are unconnected in their individual endeavors, Christopher Griffin and Barney Adams are the new and familiar faces lifting up the region as an emerging hub for golf technology and manufacturing. Griffin is producing his luxury P53 irons in Fort Worth. They’re inspired by hometown hero Ben Hogan and named for his precision (the P) and historic 1953 season, during which Hogan won three golf majors.

Adams, a familiar name to those who are fans of the sport, has founded Breakthrough Golf Technology and is producing its new “stability shaft.” He believes they’ll be as successful as his innovative Tight Lies clubs and Adams Golf company two decades ago.

“Dallas will always be my home, and golf innovation will always be in my blood,” says Adams, 78, who splits time between North Texas and his second home in the California desert. “[Innovating] is something that is always a part of me, and Dallas is the place to do it.”

The new company sits about three blocks away from where the original Adams facility in Richardson first brought Tight Lies to life. Griffin also is using part of an iconic North Texas location for his new venture: Nike Golf’s historic R&D headquarters, once known as “The Oven,” in far west Fort Worth. Griffin has dubbed it P53’s Fitting Headquarters, or “FHQ.”

“I come from an outsider’s perspective. I don’t have the traditional golf background,” says Christopher Griffin. “I have found that to be an advantage at times.”

“There is no doubt he was drawn here by Ben Hogan and his love for his clubs,” says Marty Leonard, who is leasing Griffin space in the former Nike facility. Leonard’s father, Marvin, founded Colonial Country Club in Fort Worth and was one of Hogan’s closest friends and supporters. “I was so taken by Griffin’s vision and his beautiful golf clubs,” Leonard says. “No one is more passionate than him.”

Griffin is an unlikely golf entrepreneur. He grew up in Memphis and earned English degree (chemistry minor) from Mississippi College. He then got a master’s in English Literature at Baylor and a master of humanities in philosophy from The University of Dallas. He married and continued to live in Dallas before moving to Austin in 2003 and earning a MBA in private equity finance and entrepreneurship from the Red McCombs School of Business at UT.

After holding finance-related posts at a few firms, Griffin was recruited to the West Coast, where he worked for Microsoft in the venture capital space for six years. In 2012, he returned to his Lone Star roots, drawn by a sport he loved and a Texas golf legend.

“I come from an outsider’s perspective. I don’t have the traditional golf background,” Griffin says, in a bit of an understatement. “I have found that to be an advantage at times.”

An avid golfer who prefers classic-looking clubs, Griffin was intrigued by Hogan and a chance “honor all that was great in the lost legacy of American-forged golf irons.” After Nike exited the club business in 2016, he decided the Fort Worth  facility would make a perfect base to pursue his club-making dream. It also would allow him to divide time between his residences in Austin and North Texas.

Like Hogan, a perfectionist who often stood out from the crowd, Griffin is determined to do the same with his new P53 clubs. There are no magazine ads, no billboards, no discount stores, or websites from which to order.

In fact, Griffin doesn’t recruit customers; he interviews them to see if they are a good fit for his new clubs. If they are a match, the bespoke P53 irons, a minimum order of six, go for a four- or five-figure cost, custom-fitted at FHQ for each golfer’s swing and game with exacting testing and design.

“For golfers satisfied with irons mass-produced overseas using foreign steel, the world is full of servicable options at virtually any every price,” Griffin said when announcing his new company earlier this year. “I believe that the joy of playing beutiful irons well is perhaps the most sought-after, and rare, experience in all of golf, and that is precisely what P53 enables its clients visiting the FHQ to do.”

In an interview with D CEO, Griffin says his inspiration is Hogan the man, not any company bearing his name. “When times were tough, few had faith in what Hogan could become, what he could create,” Griffin says. “I can say the same about Marty Leonard’s faith in me and my vision for P53.” 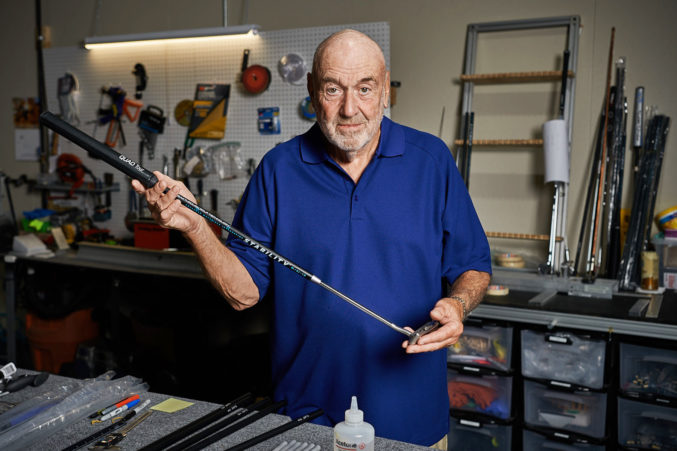 When Adams launched his Tight Lies fairway metals in Dallas in the 1990s, he faced plenty of skeptics, too. But he won them over with his firm conviction that his new club did exactly what he said it would do: help make the game easier for amateurs.

Adams believes the same is true for his new shaft technology, which shifts the weight up toward the middle to give golfers a squarer face for a more firm and consistent feel when they strike the  ball.

While Griffin recruited Jeff Sheets (who once built clubs for the 1999 Hogan Apex line) to provide the technical details for his new irons, Adams went back to Blair Philip, vice president of research and development, and Trever Napier, director of product testing, who had worked with him and former Adams Golf CEO Chip Brewer.

“We had all the technology we needed right here, and with the golf background we had and Barney’s help, it was a natural to start here,” Napier says.

North Texas hosts a wide variety of golf production companies, from the Ben Hogan Co. to Artisan Golf Technology and UST Mamiya Golf shafts. Golf dreamers and doers like Griffin and Adams should help sustain the region’s reputation for innovation in the sport for years to come.