Where Texas Is Tied Up in Red Tape

Unwise regulation burdens the state economy by raising costs and stifling competition.
By October 12, 2016|5:00 am

Asked what’s driven the success of the Texas economy over the past three decades, business and political leaders point to the state’s low taxes, small government, and light regulation. High economic freedom gives the private sector room to do the things that make economies prosper—start businesses, innovate, expand output, create jobs, get more efficient, and compete.

But what about regulation? A state-level index, created for the Cato Institute by economists William Ruger and Jason Sorens, shows that Texas doesn’t impose the heavy regulatory burdens of New York and California, but it doesn’t measure up to Florida, Virginia, North Carolina and other less regulated states either.

The latest figures, published in August, rank the Texas regulatory regime 27th in the nation—nothing to brag about (see chart on page 74). Despite Republican domination in state politics, Texas has actually slipped a bit in the pecking order over the past decade.

In any state, the regulatory landscape is vast and complex, so Ruger and Sorens had a lot of ground to cover. In the part of their work that focuses on economic regulation, they graded states on 58 different types of policies affecting land use, labor markets, health insurance, occupational freedom, and the framework governing lawsuits.

Texas did quite well on labor-market regulation—not surprising, since it’s a right-to-work state that maintains the minimum wage at the federal standard of $7.25 an hour. Texas also shines in cable TV and telecommunications regulation. The state’s regulations protecting land-use rights aren’t too bad, according to Ruger and Sorens.

They find that regulations on healthcare, occupational licensing, and lawsuits are Texas’ weak spots, pulling the state down into the middle of the pack. These are areas where Texas could look to improve its regulatory regime to make a dynamic economy even more dynamic.

Economies require some rudimentary rules of conduct to protect private property, prevent fraud, and promote public health and safety. Not all regulations serve these broad public purposes, although their advocates almost always concoct some noble public purpose for government intervention.

Economists identify several potential pitfalls in misguided or ill-conceived directives. For example, some regulations that aim at worthwhile goals impose costs that exceed any benefits—so the gain isn’t worth the pain. Using cost-benefit analysis to determine whether regulations make sense should lessen this problem, but it hasn’t gone away.

Texas has its lapses. Ruger and Sorens score states on crony capitalism—the willingness to flout free enterprise by passing out goodies to favored businesses. In the latest index, Texas ranks a middling 28th on cronyism.

Economists’ warnings about regulation haven’t kept governments from adding more red tape and restrictions. Ruger and Sorens show that nearly all states—Texas included—have become more bogged down in regulation since 2000, the biggest reason being the red tape associated with the federal Affordable Care Act, popularly known as Obamacare.

Governments clearly like to regulate, and it’s easy to see why. The stated purposes usually sound noble, so they’re politically popular. Advocates are vocal, committed, and willing to finance campaigns. Policy-makers could achieve these objectives by raising taxes or appropriating public funds, but regulation appears cheap because it furtively shifts the costs of government onto businesses and consumers.

These costs are usually hidden and widely dispersed, so those hurt by regulation often don’t even know it. Even if they do, individuals would reap only small gains from mounting a protest, while special interests’ highly concentrated gains provide strong incentives for political activity.  Voters may grouse about excessive regulation in general, but they rarely get fighting mad over specific rules, even blatant cronyism.

Imposing high costs through regulation creates a drag on the economy. Spending time and money on paperwork and compliance eats up resources that could be used productively to expand operations and add jobs. Government-imposed rules may stifle innovation, reduce firms’ flexibility, and add uncertainty to the business climate. It’s not just businesses that suffer. Companies often pass the higher costs on by raising prices—in effect, making consumers foot the bill for regulation.

Advocates for new and tougher regulations are always out in force in Austin, many of them pushing for rules that don’t make economic sense. A few lonely voices are calling for a hard look at a regulatory regime that doesn’t quite measure up to the Texas model.

A prominent one is the Austin-based Texas Public Policy Foundation, a non-partisan think tank with a free market bent. It recently took aim at state regulations for title insurance, a necessary expense for every homebuyer. Because the state fixes rates and forbids price competition, Texans pay among the highest rates in the nation for title insurance.

TPPF researchers have also made the case for lowering the barriers to telemedicine and streamlining the state’s regulations that lead to inefficient water use. Texans for Lawsuit Reform has been pushing to make the state legal system more business-friendly. Other skeptics are urging the state to cut back on occupational licenses. 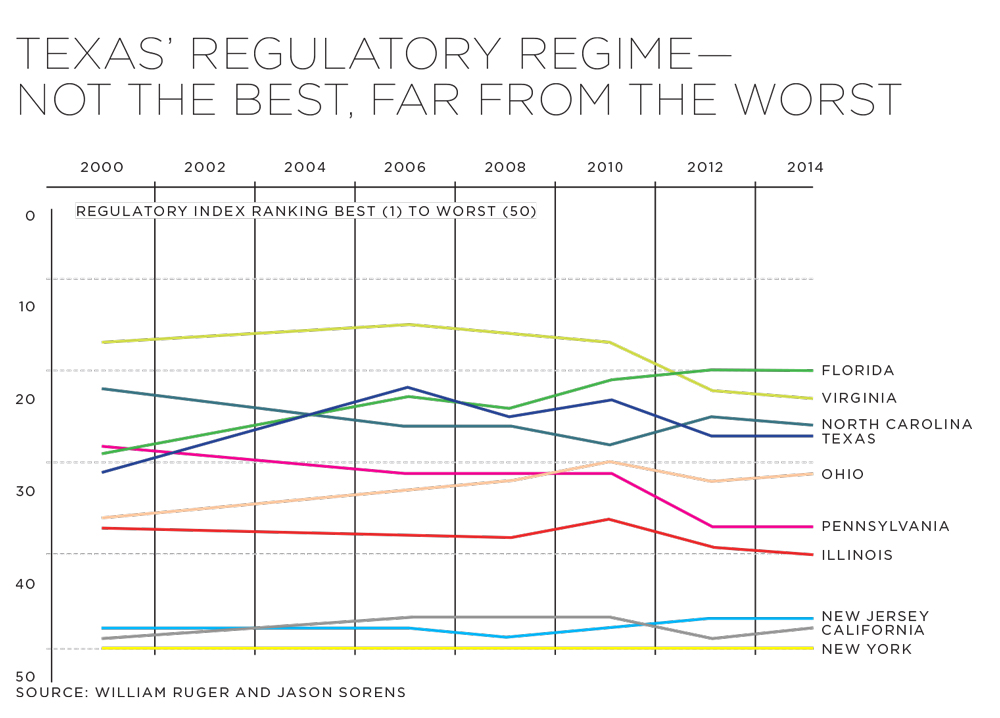 Rejecting regulation and letting markets work often pays dividends. Texas households, for example, can buy electricity at two-thirds the prices that prevailed prior to the state’s breaking up the electric companies’ monopolies in 2001.

In their indexes, Rugar and Sorens cover a lot of ground in cataloging state-level regulations. The rest of the story involves local governments’ sins against economic freedom. Measuring the regulatory regimes of just major metropolitan areas would be a monumental task, but news reports suggest that local governments are on a regulatory binge.

Nationally and in Texas, current battles center on ride-sharing services Uber and Lyft and short-term rentals facilitated by Airbnb and other companies. Dallas came close to strangling Uber to serve the interests of taxi companies. The city took an end run around labor markets by mandating a minimum wage of $10.37 an hour for city contractors and subcontractors.

The Texas model rests on three pillars: low taxes, small government, and light regulation. Being among the top in two of them has helped the Texas economy outperform other states over the past quarter century. Easing the regulatory load would help keep a good thing going and make it even better.

Should be fun.
By Tim Rogers
D Magazine Directories