Enjoy unlimited access to all of our incredible journalism, in print and digital.
Subscribe Now
Advertisement
Automotive

Rick Skaggs vividly recalls washing dishes for 65 cents an hour at an East Texas cafe as a teenager to save up for his first ride, a Honda 90 motorcycle. The Honda has long since been traded in, but the 61-year-old co-founder and president of TSP Inc. (formerly Technology Service Professionals) continues to ride to this day.

From the “Three Sisters” ride through the Texas Hill Country to the “Tail of the Dragon” ride in North Carolina, which is notorious for 318 turns in an 11-mile span, Skaggs has covered a lot of road. His longest ride spanned 1,000 miles. His latest addition is a 2015 Harley-Davidson CVO Road Glide touring bike. It’s one of four bikes in his collection.

“When [my wife and I] first got married, I had six motorcycles, two street bikes, and two projects,” Skaggs says. After his four kids came along, he put riding on the back burner for 20 years. But now, what began as a solitary activity has evolved into a family affair. “It’s really something my wife and I enjoy, just the freedom of being together on my motorcycles,” Skaggs says. Even their sons and son-in-law can be found riding around on one of Skaggs’ bikes, whether to go to dinner or enjoy a family cruise through the country.

“I want to keep riding as long as I possibly can. There’s nothing like loving a motorcycle.”

In 2002, Skaggs co-founded the IT services firm now known as TSP with colleague Frank Gonzalez, after their employer, Honeywell, decided to exit the computer service industry. “I had always thought about starting a computer service company because that’s kind of what we did for Honeywell in the last two years,” Skaggs says. “Honeywell decided to get out of that business, to our luck.”

Winning business from some of Honeywell’s former clients, Skaggs and Gonzalez aimed to provide the same level of service, but at a reduced cost. The IT company, which is based in North Dallas, has secured more than 450 contracts since its inception. “We started with four people and those four are still with us,” Skaggs says. “Today we have 675 engineers across the U.S. and in Canada. Our company is 100 percent focused on selling service. All of our engineers are out there every day with our clients. They’re there to please our clients and understand the environment.”

In a professional capacity, Skaggs uses his rides as a form of therapy. It allows him the time to get away and re-evaluate a stressful situation to prevent making a decision in the wrong frame of mind. “What I think makes me a better leader is my ability to unwind and get away … and just go get a fresh perspective,” Skaggs says. “I think that has made me stop and think before I act. Sometimes, if I have a decision I need to make, I can just get home and get on the motorcycle for my own peace and quiet. It’s helped me be a better manager.” 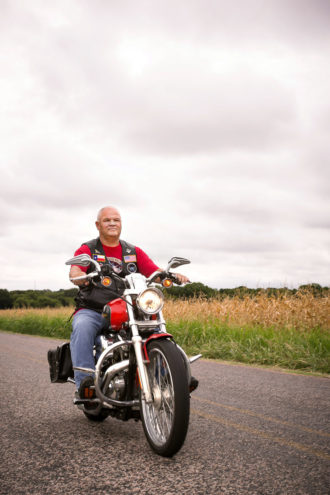 Just as he expects his engineers and employees to put safety first, he makes sure he and his wife are properly equipped every time they get on a bike. Although Skaggs hasn’t had any serious accidents, he has lost some skin over the years. So he is sure to wear safety gear, including leather chaps and a helmet. “The thing about riding is that you have to prepare,” Skaggs says. “We’re dealing with our lives out there.”

Over the past four years, riding has also provided an opportunity to give back to a cause that hits close to home with Leighton’s Ride, a fundraiser for Leighton’s Gift. Leighton’s Gift is a public charity started by Skaggs’s oldest son Chris and daughter-in-law Amy after their three-week-old daughter, Leighton, died in 2011 in a neonatal intensive care unit. To honor their daughter, Leighton’s Gift has been working to raise funds for “peek-a-boo” cameras for parents to see their infants in the NICU of Texas Health Presbyterian Hospital Plano.

Leighton’s Ride, a 100-mile round trip that starts in Celina, has been the main source of fundraising since it began in 2013. Skaggs and his family put together and participate in the ride, along with about 50 other bikers. “We’ve kept this thing alive, and we want to continue to grow it,” Skaggs says.

He completed the fourth annual Leighton’s ride in May, along with his two sons and son-in-law. According to Skaggs, Leighton’s Gift has raised $100,000 since it started.

As part of his bucket list, Skaggs wants to ride a Harley from San Diego and follow Highway 1 all the way up the California coast. Whether he’s on his new touring bike or his Sportster, Skaggs isn’t planning on putting his Harleys away anytime soon. “I want to keep riding as long as I possibly can, because I find the most peace and comfort when I ride,” Skaggs says. “I had a convertible [car] once or twice, but it’s just not the same. There’s nothing like loving a motorcycle.”

The company is also launching its voice over IP service for DFW companies.
By Danielle Abril
Business

You may have heard about our newest publication, the Dallas 500. Produced by the editors of D CEO (after months of research and hundreds of interviews), it includes insider tidbits about the most powerful business leaders in North Texas. Over the next few weeks, we’re giving you the chance to test your knowledge about these movers and shakers. Take the quiz below.
By Christine Perez
D Magazine Directories