For some professionals, few things feel better than slipping into a crisp, clean, well-made bed after a long day at work. But for others, making that perfect bed is the work. Such is the case for Mary Ella Gabler and sons Jason Needleman and Josh Needleman, who together run Dallas-based luxury linen company Peacock Alley.

Gabler, who founded the company in 1973, passed the reins to her sons in 2010 after more than three decades at the helm. Under the leadership of the Needlemans, Peacock Alley has expanded into more than 500 retailers, hotels, and resorts. It has also opened design studios in Dallas, Nashville, and Atlanta. The company’s niche, luxury linens, is a subset of the national home-textiles market, which the trade publication Home & Textiles Today pegs at $28 billion.

As a seasoned executive with turnaround experience at gaming companies Activision and Reel FX, Jason, who serves as Peacock Alley’s president and CEO, aims to make the company an even stronger textiles titan with help from his mother and brother. “Josh and I created the buttons on one another,” he says. “So he knows what buttons to push on me, and I know what buttons to push on him.”

Mary Ella Gabler started Peacock Alley in 1973 after securing a bulk custom pillow order from Neiman Marcus. She recently penned a memoir, Uncommon Thread-A Woman, A Brand, A Legacy: the Story of Peacock Alley Fine Linens. And not unlike the pristinely made beds that helped her establish Peacock Alley, Gabler also makes a delightfully precise Old Fashioned. Here’s the recipe (also found on page 47 of her book).

In an old fashioned glass, combine the simple syrup, bitters, lemon, and orange slices, and one cherry. Muddle well to combine. Fill glass with ice cubes. Add blended whiskey and stir. Top with splash of club soda and garnish with remaining cherry.

Notes: For simple syrup, mix ½ cup granulated sugar with ½ cup water, and bring to a boil; remove from heat once sugar is completely dissolved; let cool before using. For the whiskey, Uncle Joe liked Seagram’s V.O.

“We’re very different, and we both really leverage each other’s strengths and understand and respect each other’s weaknesses,” says Josh, senior vice president, who joined the company in 1993. “Having that relationship and knowing that at the end of the day, you’re brothers, it makes it easy—or easier—knowing that he can’t fire me and I can’t fire him.”

The sons know they have their work cut out for them. But they have a leg up, building on a sturdy foundation that their mother—who still plays an active role in the company—created from scratch.

Gabler’s journey in business began in 1961, when she left her Pennsylvania home at age 21 for New York City with just $40 and a set of golf clubs. She found work at one of New York’s first woman-run public relations firms, where she forged relationships that would take her where few women had gone before: the financial industry.

“I was working for three men who were the dynamos on Wall Street, and it was a very exciting time,” says Gabler, 75. She eventually went to the New York Institute of Finance and was among the first female registered representatives on Wall Street. “Through that period of time, I became more comfortable with taking risks,” she says.

In 1966, Gabler moved to Dallas after her soon-to-be husband, Michael Needleman, transferred there. Local stockbrokers didn’t take 25-year-old Gabler seriously when she walked into their offices asking to join their teams, and she raised some eyebrows by riding her Honda 50 motor scooter around town. But in 1971, when Gabler took a trip to New York with her toddler-aged sons to visit her former roommate, Gayle Gordon, she had a moment of inspiration.

“We saw these cute pillows in a boutique on Madison Avenue,” she says.

Gabler and Gordon quickly realized that they could make similar pillows for a fraction of the price tag. In the beginning, the two gave the pillows away to friends as gifts. They were so well received that the duo started selling them in larger quantities at a floral shop on Henderson Avenue. And that’s where the fledgling company got its big break. A contact Gabler made during a brief stint working at Neiman Marcus shortly after she moved to Dallas spotted their handiwork. 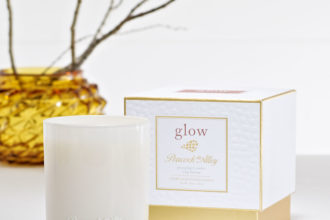 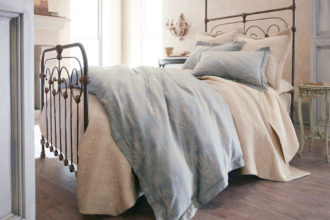 “We got an order for 250 of them and, of course, panicked,” Gabler says. “They were patchwork, and we were sitting up at our sewing machines putting all these patches together.”

That order was for Neiman’s 1971 “Fete des Fleurs” Fortnight celebration, which was attended by Prince Rainier and Grace Kelly, and it would prove to be a game changer. “Our little floral pillows … were just in little vignettes around the store,” Gabler says.

After pillows came pillow shams, “which people had never heard of,” blanket covers, bed skirts, and other linen luxuries for the bedroom. Business with Neiman’s opened doors to other specialty stores.

These days, Peacock Alley’s business encapsulates multiple units, including wholesale, partnerships with local boutiques and specialty stores, online partnerships, catalogs, hospitality companies, and international accounts. The company has experienced 100 percent growth in the past six years and, over its recordable life, has sold more than 1.2 million sets of sheets.

Gabler’s sons are hoping to see those numbers continue to climb. After all, they’re in it for the long haul. “It’s like the Mafia, I mean, you’re here together. And the only way you can leave is in a casket,” says Josh. Adds Jason: “It’s going to be a nice pillow-lined, like with some sheets, casket, though.”