Leonard Firestone and Troy Robertson left successful careers in 2010 to try the high-risk field of micro-distilling. Three years later, the partners knew they made the right call when their 82-proof TX Blended Whiskey won a double gold medal at the San Francisco World Spirits Competition. Not bad for former media and oil-and-gas execs with no prior spirits industry experience.

Firestone and Robertson wanted to provide whiskey aficionados with super-premium spirits that have a Lone Star connection, and were willing to forgo salaries for a few years to get there. “There’s a whole other level of motivation when your family’s livelihood is wrapped in this,” says Robertson, a 39-year-old Texas Tech grad from Midland whose family has a history in energy. His wife’s first reaction? “You’ve got to be kidding.” He knew if he couldn’t convince her of the potential viability of a micro-distillery in Fort Worth, how could he persuade skeptical investors? Robertson walked his wife, then a banker, through the business plan. With the backing of both, the venture was launched. 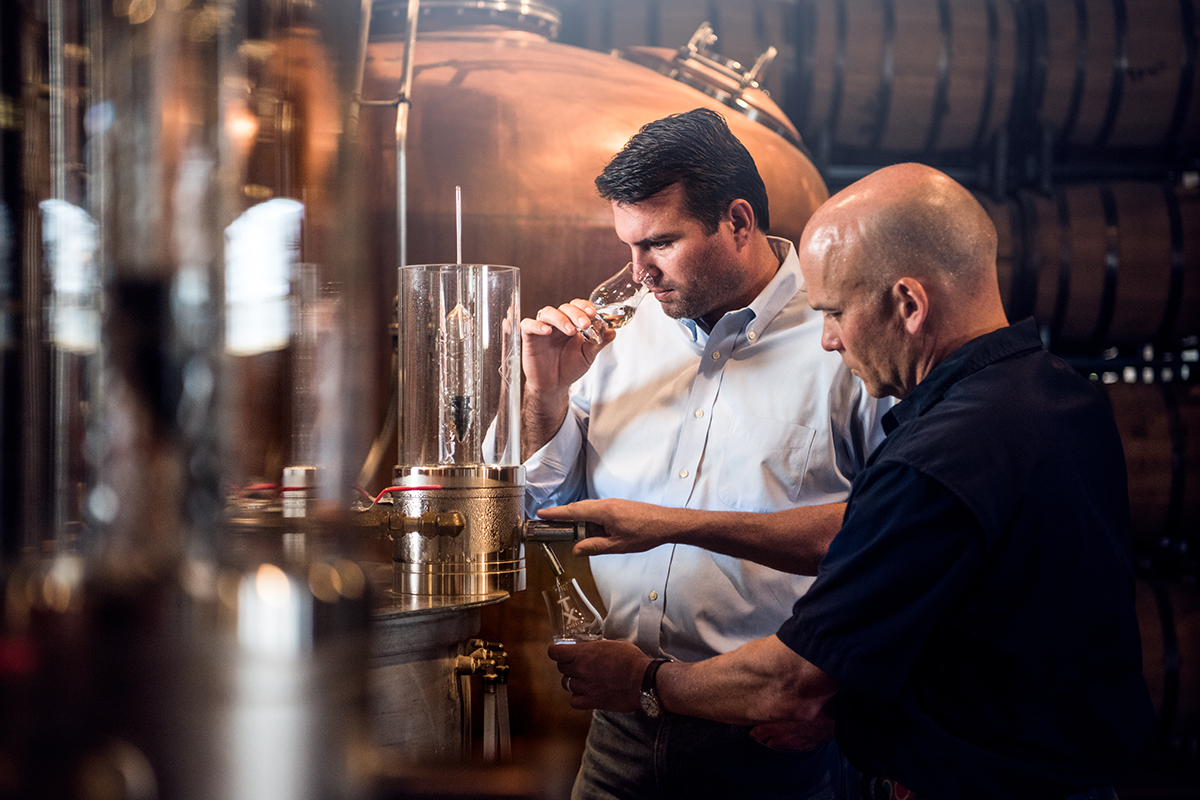 Robertson and Firestone sample the goods. Portrait by Sean Berry
Portrait by Sean Berry
So far, the gamble for Firestone & Robertson Distilling Co. is paying off. “Sales have exceeded expectations,” says the 49-year-old Firestone, great-grandson of tire-making icon Harvey Firestone. After winning the award in San Francisco, he and Robertson received numerous requests from distributors across the country and around the world. The duo didn’t want to be overly ambitious, though, and decided to focus on just a few states: Texas, Louisiana, and Oklahoma.

Neighbors in Fort Worth’s Monticello neighborhood, the two had independently begun investigating micro-distilling after reading about the success of Austin’s Tito’s Handmade Vodka. When Robertson reached out to Hill Country-based Garrison Brothers Distilling for advice, he was told another would-be whiskey maker from Fort Worth—Firestone, then a cable television exec—was coming down the following week. “That floored me,” recalls Robertson. “I thought I was the only one with this idea.”

‘That floored me. I thought I was the only one with this idea.’

Warily, the two met. But in short order, they realized they were pursuing a similar goal. “It was serendipitous,” Robertson says. “Same ideas, same vision.”

They partnered up and secured a 40,000-square-foot brick building (circa 1926 and vacant for decades) and ordered new equipment and charred oak barrels. The most formidable challenge was convincing skeptical investors without even a dram of whiskey to sample. They couldn’t distill without a license, but they couldn’t start up without capital. But their spiel, if not their earnest commitment to the venture, succeeded in raising the necessary funds.

In 2014, the partners overcame stiff opposition from nearby residents to acquire the historic, but closed, Glen Garden Country Club’s 106 acres from the city of Fort Worth. They also had faced public reservations from the Ben Hogan Foundation (both Hogan and fellow golf legend Byron Nelson had caddied at the 1912 golf course). Planned is another distilling unit and a visitors complex suitable for weddings and corporate events.

Their well-reviewed TX Blended Whiskey is a marriage of whiskeys sourced in Kentucky and elsewhere. Firestone, Robertson, and their head distiller Rob Arnold, a Kentuckian with a master’s of science in biochemistry and family roots in distilling, mixed and balanced the blend to its winning formulation. (“For fans of whiskey with huge amounts of vanilla and honey aromas, this is your next brand,” enthused the Austin Chronicle.) Now the team is awaiting the imminent release of its first, totally house-distilled whiskey, four years in the making. 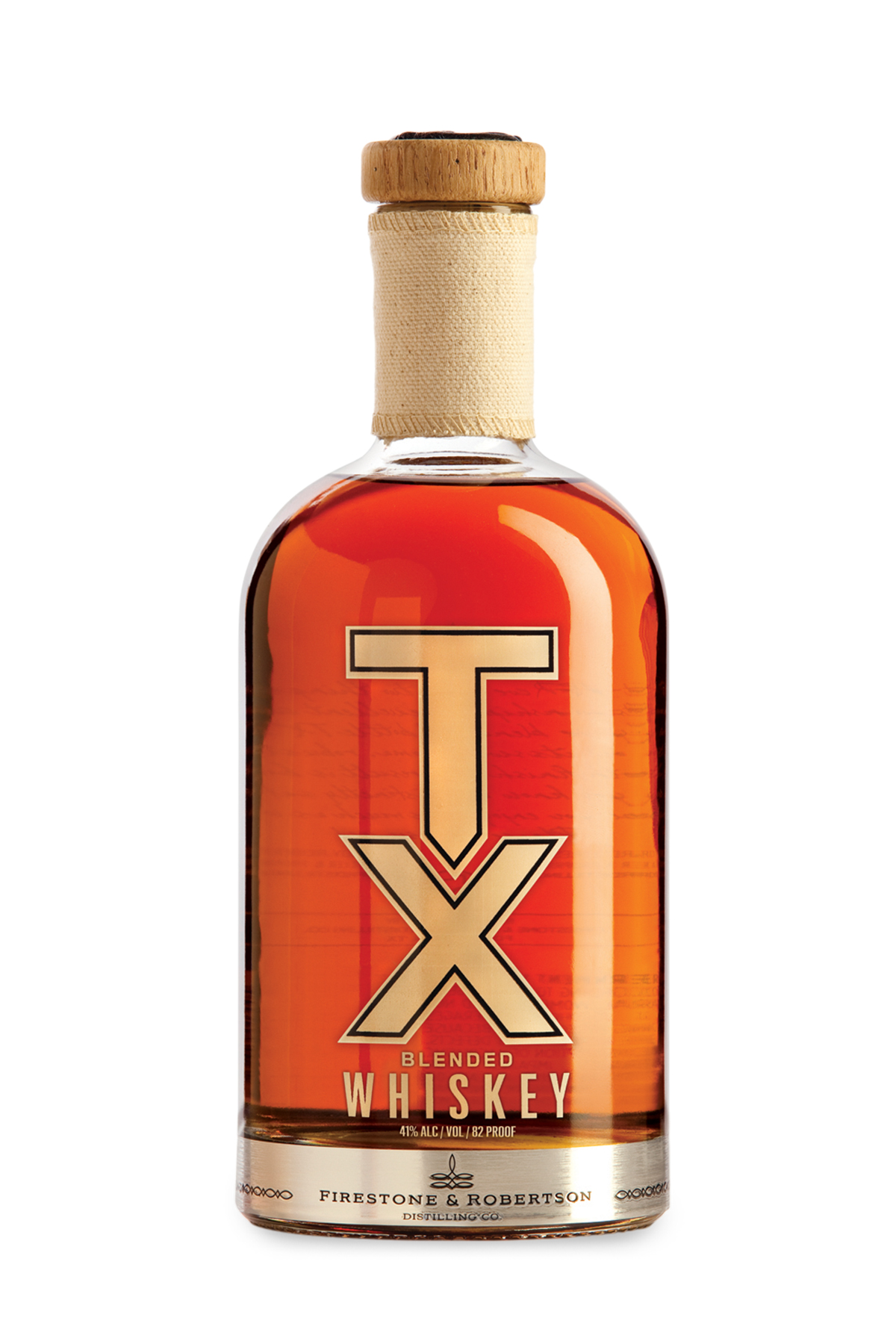 Texas produces no malted barley, so that’s trucked down from Minnesota. But the rest of the ingredients are regionally sourced. The corn and wheat are grown in Hillsboro. Then there’s F&R’s proprietary yeast strain with a truly remarkable Lone Star pedigree. Arnold collected 100 yeast samples from cactus, oak bark, and other flora at Rancho Hielo Brazos in Glen Rose.

Distiller Magazine said it’s extremely rare for a micro-distiller to isolate a wild yeast strain for its spirits, and there’s plenty of good yeast on the market. But F&R wanted something uniquely Texan, eventually leading Arnold to a small pecan ranch. The land had been granted to the heir of a man who died defending the Alamo, as attested by Davy Crockett before the iconic mission fell. Can’t get more Texan than that.

“We know it’s close to its release date,” says Firestone, after Arnold used a distiller’s tool called a “whiskey thief” to draw a few ounces of a warm amber liquid, then transfer it to a tiny tulip glass, before sampling the  dark fruit flavors between deep inhalations of a sweet aroma. “Maybe this year.”