Because she may be the conduit Dallas needs to unite innovators who can change how residents live.

Imagine living in a city that can detect your car hitting a pothole and automatically dispatch repair crews. Think of a city that saves hundreds of thousands of tax dollars by having light poles that adjust power outputs based on need. If you’re driving and a crime happens nearby, picture a city that alerts you, maybe via your Bluetooth-enabled speakers. This, Sanders says, is lighting up a smart city.

She sees Dallas now as a circuit board without connectors—a foundation with endless technological potential but no link between the components. That’s what she aims to provide as executive director of the Dallas Innovation Alliance: Bringing together corporate innovators, entrepreneurs, and city leaders who can build the foundation.

The purpose of a smart city is to connect different elements—buildings, transportation systems, city services—so that the people interacting with them can make better decisions based on real-time data. This is made possible through what’s known as the Internet of Things (the digital connection between objects).

The alliance, a public-private partnership that’s part of nonprofit Envision America, includes AT&T, Cisco, IBM, Microsoft, Ericsson, Dallas Area Rapid Transit, the city of Dallas, the Dallas Entrepreneur Center, the Dallas Regional Chamber, and Downtown Dallas Inc.  “Piecing all of that together is what gets me most excited,” says Sanders. “It’s something I’ve done my entire career.”

The 34-year-old former PR rep has worked for global crisis management firms like New York’s Burson-Marsteller and local shops like Spaeth Communications and Perry Street Communications. In navigating relationships for clients like Accenture and Shell Oil Co., she was quickly exposed to the cross section of technology and sustainability.

“That’s when my interest in sustainable and smart cities started to build,” Sanders says. “I started to see IoT, how it crossed with renewable energy … and what that looked like for communities.”

Now she has the chance to explore the breadth of IoT in its fullest. And she isn’t alone in her objective. Bill Finch, Dallas’ chief information officer, says he envisions “a city that uses data for insights to make better decisions. There are tech solutions that will help us in changing the culture in our organizations to think of data first instead of reacting,” he says.

Finch first approached Cisco with the vision. Then he met Trey Bowles, CEO of the DEC, who was also exploring the topic and co-founded the alliance. Sanders has spent years in leadership roles for groups like the Mayor’s Star Council, for which she also served as president. So when it came time for Bowles to find someone to helm the alliance, one name came to mind. “I think it was a mixture of her work ethic, her passion for smart cities and innovative solutions … and demonstrated leadership over and over again,” Bowles says. “She has an unbelievable heart to serve.”

Meanwhile, companies like AT&T and Ericsson were already well into the IoT world, providing technology that could connect cars, homes, and devices. For AT&T, the alliance was a no-brainer.

Michael Zeto, general manager and executive director for AT&T’s global smart cities business, says the company believes Dallas has the potential to become one of the smartest regions of the U.S., adding that smart cities are scarce. And with Sanders pioneering the path, Zeto has confidence in the alliance. “She’s customer-centric, which will lead to being city-centric,” he says. “You not only have to get council and partners to buy in, you have to get the citizens to buy in.” 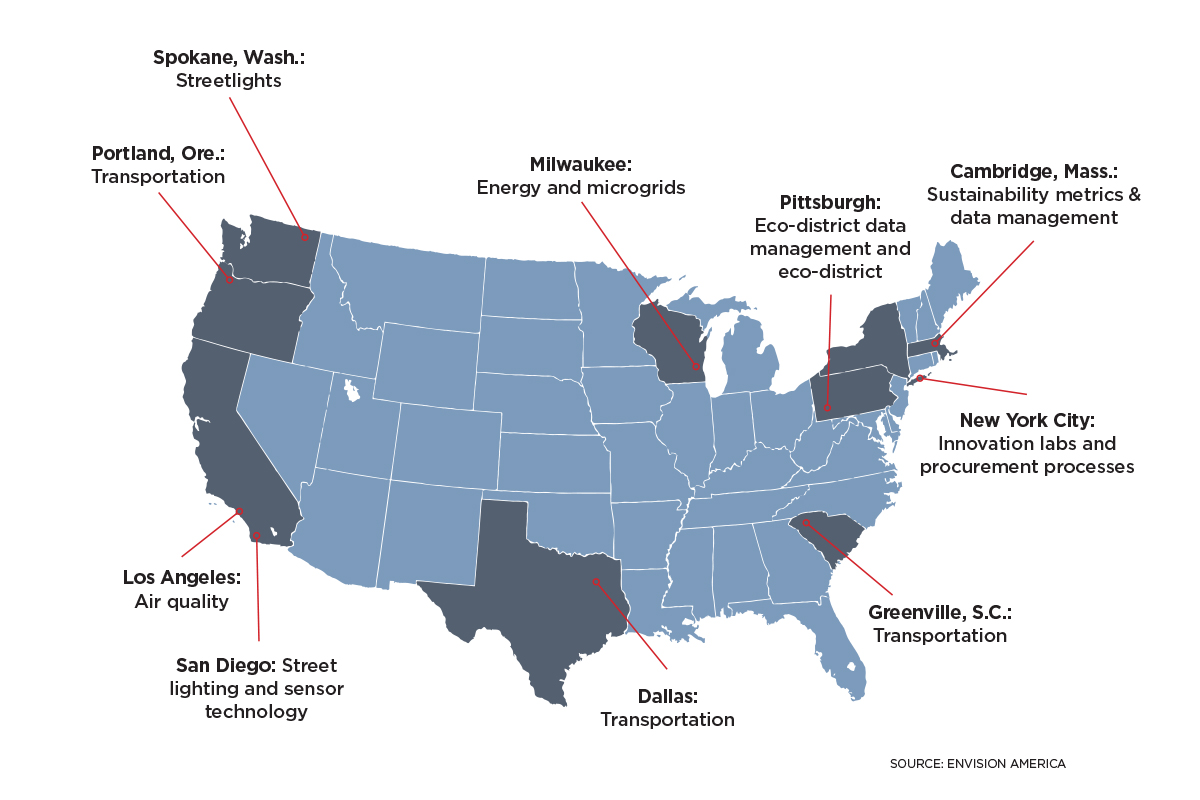 Sanders expects the first projects to be installed in the West End, the living lab, within the next six months. Projects will start here and could scale out if innovators can prove the concept. She envisions ideas like a transportation app that would allow users to hail an Uber, buy a DART ticket, or reserve a parking space, using data as their guide. Services would run on a proposed public Wi-Fi network.

To help bring ideas to fruition, alliance members, who meet monthly, are donating services. For example, AT&T may offer its network for testing projects. If an idea is picked up by the city, the developer could then bid for a city contract. The solution would have to meet a need in the city’s strategic plan to be subject for a vote at the annual budget meeting.

With sustainability of the projects at the forefront of the alliance’s priorities, Finch believes it’s only a matter of time before Dallas begins to benefit. “The reality is really pretty large,” he says.

Sanders expects to release details on new partnerships, funding, and projects soon. One by one, she’s hooking up each connection—until the innovative energy powers up a smart city.