The decision was so important that Ben Pogue summoned an emergency meeting of his most trusted advisors. “This is the picture,” the 35-year-old CEO of Pogue Construction recalls telling them that summer day in 2014. “We have a potentially catastrophic event that has gotten into a media frenzy. We’re all over the news. We have a 33-year client we’ve stood by for a countless amount of work. I need your opinion on our options.” And, as he recounted later, “None of the options were good.”

Pogue’s crisis had been building through early 2014, starting with the Allen Independent School District announcement in February 2014 that it was closing its elaborate new Eagle Stadium because of defects, including the appearance of cracks in the concourse floor. Built for $60 million, the 18,000-seat high-school stadium had attracted national attention when it opened two years earlier. Its features included a second deck on one sideline, a 38-foot-wide high-definition video scoreboard, vendor stands serving Chick-Fil-A, and a three-story press box complete with a luxury suite.

When Pogue won the bid to build the stadium following its approval in an Allen bond election, the facility represented a major coup for the McKinney-based construction firm, which was grappling like everyone else at the time with the Great Recession. It was also the first big bid Pogue had landed since taking over the company from his father, Paul Pogue, who founded it in 1979. The elder Pogue had built the firm into a top-tier general contractor grossing $300 million a year, mostly in public-sector projects like schools. 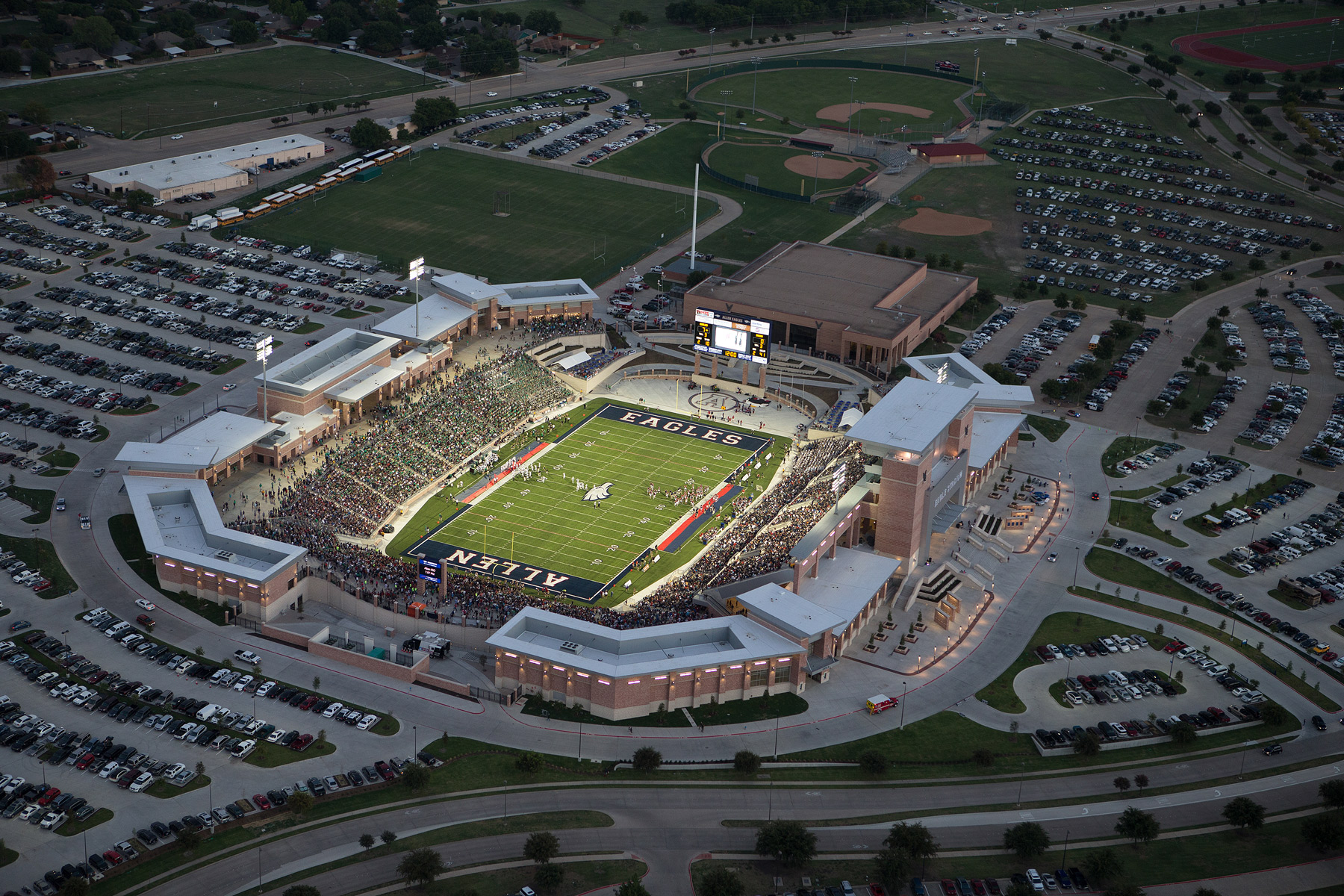 Allen's Eagle Stadium Photo courtesy of Allen ISD
Ben Pogue asked his father to attend the summer 2014 meeting along with his chief financial officer, lawyers, and several other people close to the company. One option before them was to let the school district file suit against Pogue and PBK Architects Inc.—the Houston-based firm that had designed and engineered the stadium—and let that process sort out the liability. The advantage of that solution was that it would activate the $26 million insurance policy Pogue had taken out on the project, shielding the company itself from financial losses. Going that route would also free him to run the company instead of being consumed by Eagle Stadium. On the other hand, legal action likely would have dragged on for two years or more, immensely complicating matters for the school district—and shredding Pogue’s reputation with its North Central Texas client base.

District announces stadium will close due to multiple defects.

Companies agree to perform all fixes as “warranty work,” at no charge to district, and to commence repairs.

Repairs are completed and stadium reopens.

Pogue says he worked from the start to communicate to Allen ISD and the wider public that the company was going to, in his words, “take care of” the problems. So, he rejected the litigation solution. Then, he began seeking a way to make good on his pledge that repairs would be made “at no cost to Allen ISD taxpayers.”

Pogue says the company had been aware since 2012 of surface cracks in the concourse floor, which he says were more cosmetic problems than structural. He was already in a legal dispute with the subcontractor who did that work. But no solution to the cracks problem had been reached by February 2014, when he heard through the grapevine that a press conference had been called in Allen regarding the stadium.

Pogue says he threw on a tie and found himself in front of multiple news cameras at the media gathering, being peppered with questions. “One of our core values is open, honest communication, so I said ‘I’ll answer questions,’” Pogue recalls. “You could kind of feel the heat in the room. I said … ‘We’re here to respond and stand by our client.’”

During the spring of 2014 Pogue sent his other school-district clients letters and made phone calls, telling them, “We don’t know all the issues, but we’re standing by Allen. If you need me to speak to your board, I’m open to that.”

Looking back, he says the company likely lost a couple of projects during that period because Pogue was just too hot to touch. News of the stadium problem made the national television networks, major U.S. newspapers, and even some European news outlets.

Early on, in March of 2014, Pogue retained Irving-based WJE, whose specialty is fixing problem structures. Pogue also hired a crisis communication expert, David Margulies, to deal with the media.

Some of the unfavorable glare shifted from Pogue to PBK in June of 2014, when Nelson Forensics, the firm hired by the district to investigate the matter, issued a report laying most of the blame for the stadium’s defects on design failures, which were PBK’s responsibility. Engineering flaws were found in retaining walls, the concourse framing, the press box supports and structure, the scoreboard, and in the project’s overall durability.

The solution that Pogue, PBK, and the district ultimately settled on came in two stages. Initially, the district wanted to bid out each of the seven phases of repairs suggested by their experts. For the first phase, fixing the scoreboard, PBK covered the $280,000 cost and Pogue won the bid, edging out other contractors. “It was our building, so we wanted to do the work,” Pogue says.

The solution that took Eagle Stadium’s repair to the goal line was reached late last summer, and spelled out in a letter Pogue sent to the district in the fall. In it, Pogue promised to perform all repairs to the stadium as “warranty work,” at no charge to the district. PBK agreed to do the same.

In determining who would pay for what, the companies agreed to work that out between themselves. Should they disagree, they pledged to each put up half the disputed construction cost and to arbitrate any differences over proportionate costs after all the work was completed and the stadium reopened.

Pogue says the warranty language allowed the company to spend money on the work without voiding its insurance coverage.

Despite an abnormally rainy winter and spring, repair work on the stadium was completed, as promised, in time for it to host Allen’s graduation ceremony in early June. Pogue says he had five managers at the site for most of that period, with 300 to 400 workmen laboring through holidays to complete the aggressive schedule.

Dan Bogio, PBK’s CEO, says he expected the total cost of the repairs to run just under $15 million, including reimbursing the district for expenses and lost revenue.

Meanwhile, Pogue, looking for some positives in the “ordeal,” says he can use the experience to demonstrate to prospective clients his company’s ability to stand by its commitments. “We can say, ‘If an issue comes up, we won’t only be able to promise this is how we’ll handle it,” Pogue says. “We can say, ‘This is how we did handle it.’ And that’s huge for our clients.”