It’s always fascinating to analyze the compensation packages of C-level executives in North Texas. Leaders of global corporations that are based in Dallas-Fort Worth attract widespread attention; D CEO focuses its compensation reporting on middle market companies, a powerful local economic force. Here, for the seventh straight year, we examine executive pay at these firms—and how the nature of CEO pay for these companies continues to change. As always, research is performed by Paradox Compensation Advisors, a Dallas-based consulting firm.

This year, Paradox analyzed data on total compensation (base salary, annual bonuses, and long-term incentives such as stock options and stock awards) for 52 companies with 2014 revenue of $50 million to $1 billion. To qualify, the company’s CEO had to be in place for the full year (or sufficient information provided to project full-year pay). Because compensation is expected to be correlated with performance, research included annual revenue and net income, too. 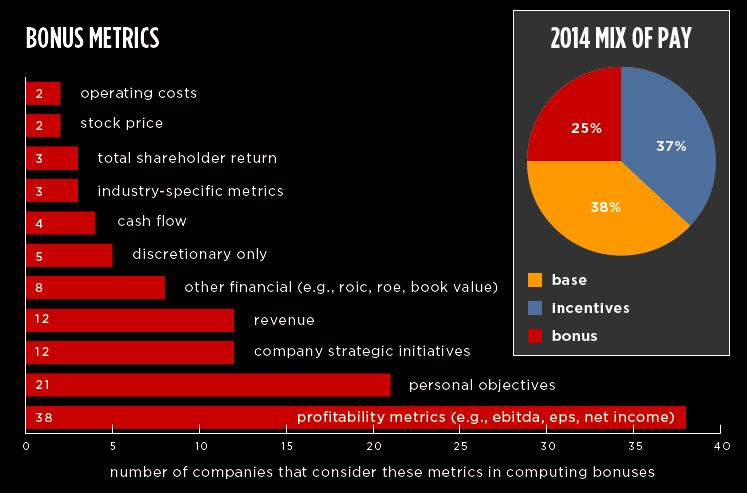 These statistics reflect increases in how midsize companies pay their CEOs, regardless of whether incumbents stayed in place. Of the 39 CEOs who remained in the job through both 2013 and 2014, total compensation grew by 21 percent, indicating that companies increased pay more for a sitting CEO than one brought in from the outside or promoted from within.

Changes in CEO base salary, at 3 percent, don’t vary from pay increases for the average employee. The bulk of the growth in total compensation comes from a continuing rise in the value of long-term incentives, where the value of equity awards and other long-term incentives rose by 20 percent. Annual bonus awards also grew by 12 percent. Increasingly, midsize companies use defined performance criteria to evaluate the CEO’s performance, determine his or her bonus, and, at least in part, determine whether equity awards will vest. “Although total compensation certainly saw a significant hike, it is typically more performance-based than five to 10 years ago,” Cameron says.

As the data on the following pages reveal, total 2014 compensation, top to bottom, ranges from $26.6 million for La Quinta Holding’s Wayne Goldberg to $96,000 for William McManemin at Dorchester Minerals.