A large number of top–notch museums and exhibition venues and active, ultra-affluent collectors have put Dallas on the international art map. Although these wealthy collectors often make their acquisitions elsewhere, the city’s art business is increasingly vital as the population—and art consciousness—grows in North Texas. But what’s missing, experts say, is the community of local artists and dealers that would help make Dallas a true global art powerhouse.

“Dallas is one of the largest and most sophisticated collector markets in the world, and most people do not even realize it,” says Scott A. Barnes, CEO, founder, and chairman of ArtBanc, a local firm that offers global collection management and sales services. “Some of the best collectors in the world are in Dallas.”

The most prominent among them—Howard Rachofsky, Deedie Rose, Marguerite Hoffman, and Kenny Goss—nurture a passion mainly for contemporary art. But other genres, including western and Texas art, also have their devotees here. Real estate investor Harlan Crow, for example, collects historical art, such as a portrait of George Washington by Rembrandt Peale. Margaret McDermott, the widow of Texas Instruments co-founder Eugene McDermott, has favored the work of French Impressionists like Claude Monet and Pierre-August Renoir.

“I mention to somebody in the art world in London that I’m in Dallas, and the first thing is ‘Cha-ching!,’ like money,” says Peter Doroshenko, executive director of the Dallas Contemporary exhibition space. “Here, people are buying national and international art, and they’re not afraid.” Doroshenko, who has ratcheted up the Contemporary’s profile since 2010 with exhibits of edgy fashion photography and leading international artists, believes the city ranks second only to New York in its number of active collectors. “Over the course of the few years that I’ve been here, Dallas has really grown by leaps and bounds,” he says.

“It’s a big ecosystem, but you get to a critical mass and you can sense the momentum. The best gauge is when you go to [Art] Basel and they’re talking about Dallas.”

The city’s reputation is sure to soar higher with the recent arrival of Pauline Karpidas’ world-renowned art collection. The widow of a Greek shipping magnate, Karpidas has shipped the bulk of her art from London into a business office, galley, and warehouse in the Design District managed by her son, Panos. The facility will likely host shows, but details have yet to be determined, according to Panos’ wife, Elisabeth Karpidas.

“We don’t have a collection in Dallas that’s one-tenth that good,” marvels collector and gallerist Kenny Goss. “I can’t believe it’s coming.”

Dallas wouldn’t have this stature if it weren’t for the confluence of many factors, some established decades ago. Leaders of the Dallas Museum of Art, the Nasher Sculpture Center, the Dallas Art Fair, the Dallas Contemporary, Goss-Michael Foundation, TWO x TWO for AIDS and Art, and the Dallas Arts District have worked—often collaboratively—to elevate interest and understanding of the visual arts. And, their work has paid off. In a recent ranking of the “Top 10 U.S. Art Cities” by the travel website away.com, Dallas came in at No. 5, behind only Washington D.C.; San Francisco; Santa Fe, New Mexico; and New York.

In keeping with Dallas’ reputation as a business city, some of the area’s most popular commercial facilities have also been influential. NorthPark Center founders purposefully arrayed it with museum-quality post-war and contemporary art in the 1960s, and the Jerry Jones family installed works by leading artists throughout AT&T Stadium in Arlington. Even Neiman Marcus employs a full-time corporate art curator to manage a collection that’s displayed in all stores and was started by Stanley Marcus.

Entire museum boards are flocking to the DMA, the Nasher, and private collectors who graciously welcome art aficionados. Christen Wilson, who chairs the advisory committee at the Nasher, says the change in Dallas’ reputation is dramatic. “I travel all over—London, Paris, Art Basel, Zurich, art fairs in Beijing and Shanghai—so I’m definitely out there, and everyone in the art world knows about Dallas and has heard about the art scene and wants to pay a visit,” she says.

Over a three-week period last fall, Wilson opened her collection to dozens of board members and trustees from the Whitney Museum, the Guggenheim New York, Guggenheim Venice, and a museum in Paris. “The collectors here have a very open-door policy, and from what I understand that is not everywhere else,” she says. “That’s why people say the art community in Dallas stands out way above and beyond—because everyone shares in what’s happening.”

Respected post-war art adviser and former gallerist John Runyon says the difference is palpable, if indefinable. “It’s a big ecosystem, but you get to a critical mass and you can sense the momentum,” he says. “The best gauge for me is when you go to [Art] Basel and they are talking about Dallas. People want to come here. That didn’t exist when I started in the business 25 years ago.”

“What we are seeing in this part of the world,” observes globe-trotting photographer Mario Testino, “is that there is money to support the arts.” 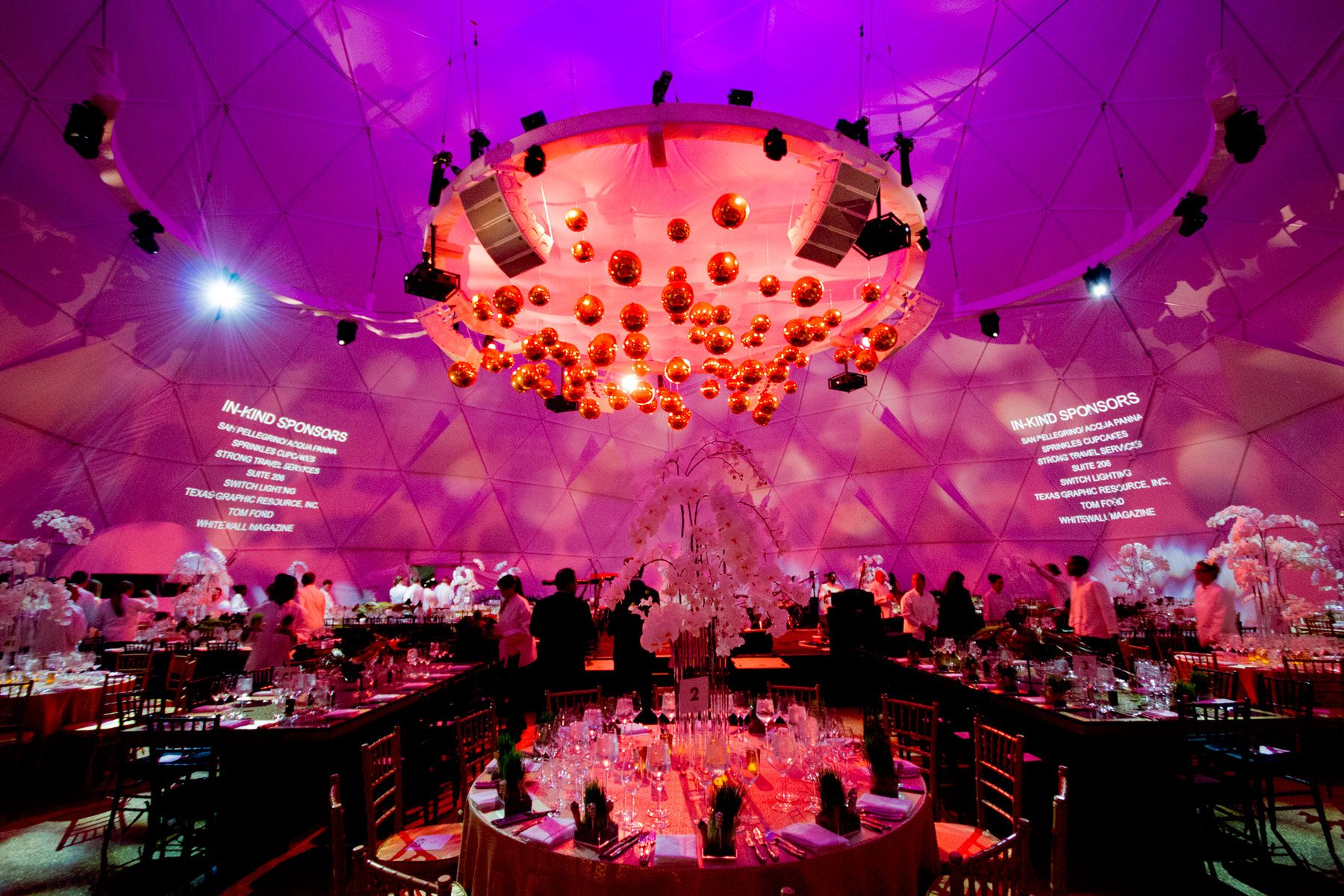 FOR A GOOD CAUSE: TWO x TWO for AIDS and Art has raised more than $52 million for the DMA and amfAR by attracting an elite crowd of patrons to annual soirèes at the Rachofsky House. High-profile attendees have included Robert Rauschenberg, Julian Schnabel, and musicians Erykah Badu and CeeLo Green. Photography by Kevin Tachman
Photography by Kevin Tachman
In contrast to the robust collector and museum scene, Dallas’ artist and dealer community is barely a brushstroke on the global landscape. But it’s improving, observers say. They cite growing interest from professionals building homes and relocating here and a flurry of galleries that have set up shop in the past several years.

Given the intensely confidential nature of art transactions and the lack of research data, however, it’s hard to put a precise figure on the size of the local market. “Certainly in the last few years, there is an increase of interest in modern and contemporary art from a younger generation,” says Frank Hettig, director of modern and contemporary art at Heritage Auctions. “They are buying art locally and by young artists.”

Talley Dunn, whose namesake gallery is among the most prominent features of the commercial tableau, is enthusiastic. She represents Dallasite David Bates, whose paintings sell in the six figures, and 27 more artists. “Absolutely, it is a thriving business,” Dunn says. “Dallas is a city of a certain size with people building homes and wanting to collect art and put it in their home or business or foundation. There is a strong audience of buyers.”

Dunn is one of several local gallerists who rent booths at the annual Dallas Art Fair downtown in April. Launched in 2008, the fair highlights contemporary art and has drawn exhibitors from as far as Tokyo. “The Dallas Art Fair has had a lot to do with creating an awareness and momentum and everybody looking at what a stellar art environment we have here,” says Marty Walker, a former artists’ representative and current private dealer who launched a used art-crate business called Lonely Crates. “It has helped educate new collectors.”

Fair co-founder Chris Byrne says that although he isn’t privy to dealer revenue and can’t estimate fair sales, indicators are positive. “We do have a lot of gallerists that return every year, so that’s indicative of how much business is done,” Byrne says. “Every year the audience response is much better.”

The fair presented 94 galleries last year, a 13 percent leap over 2013. Marlborough Chelsea of New York and Jonathan Viner Gallery of London were among the 37 that returned. 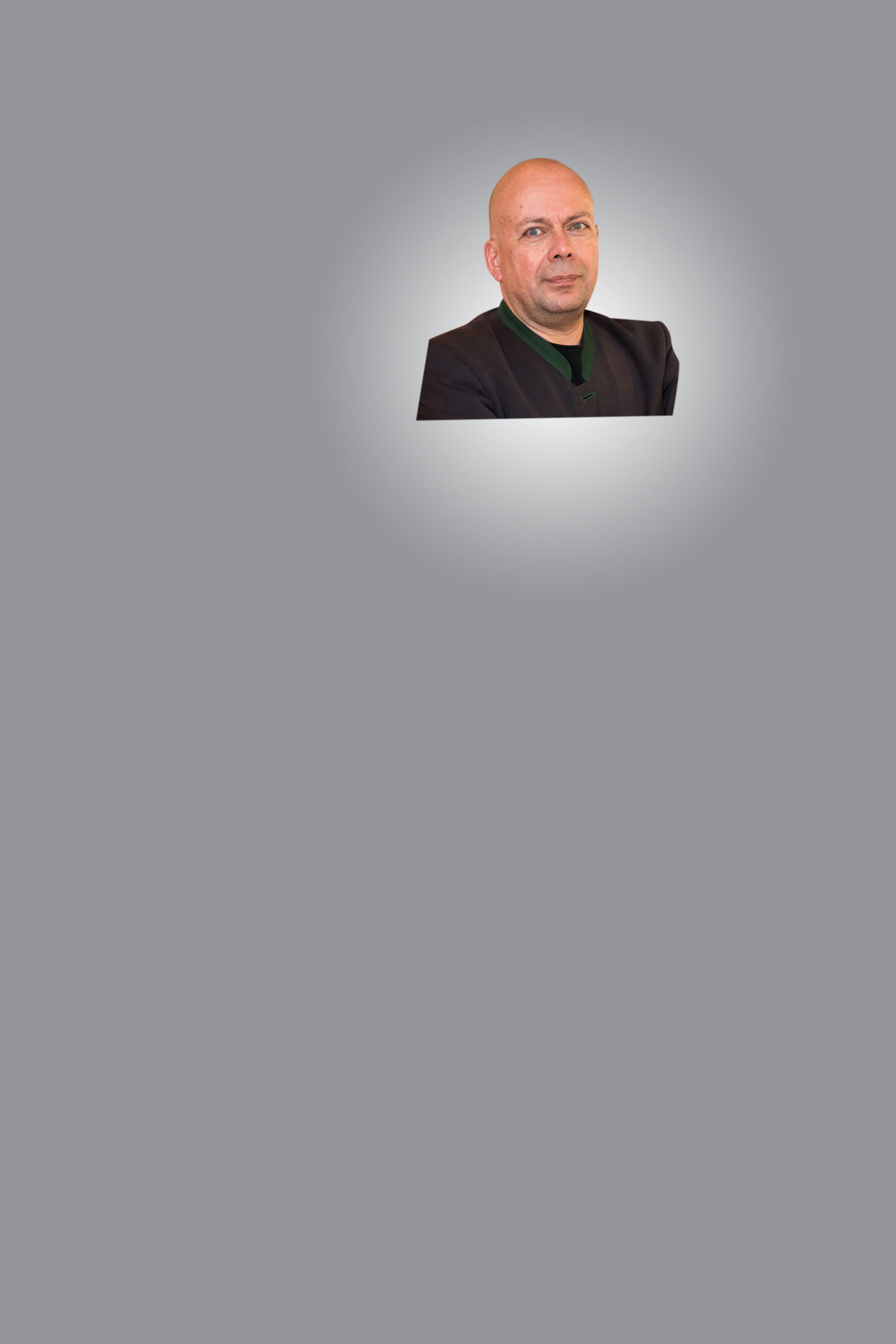 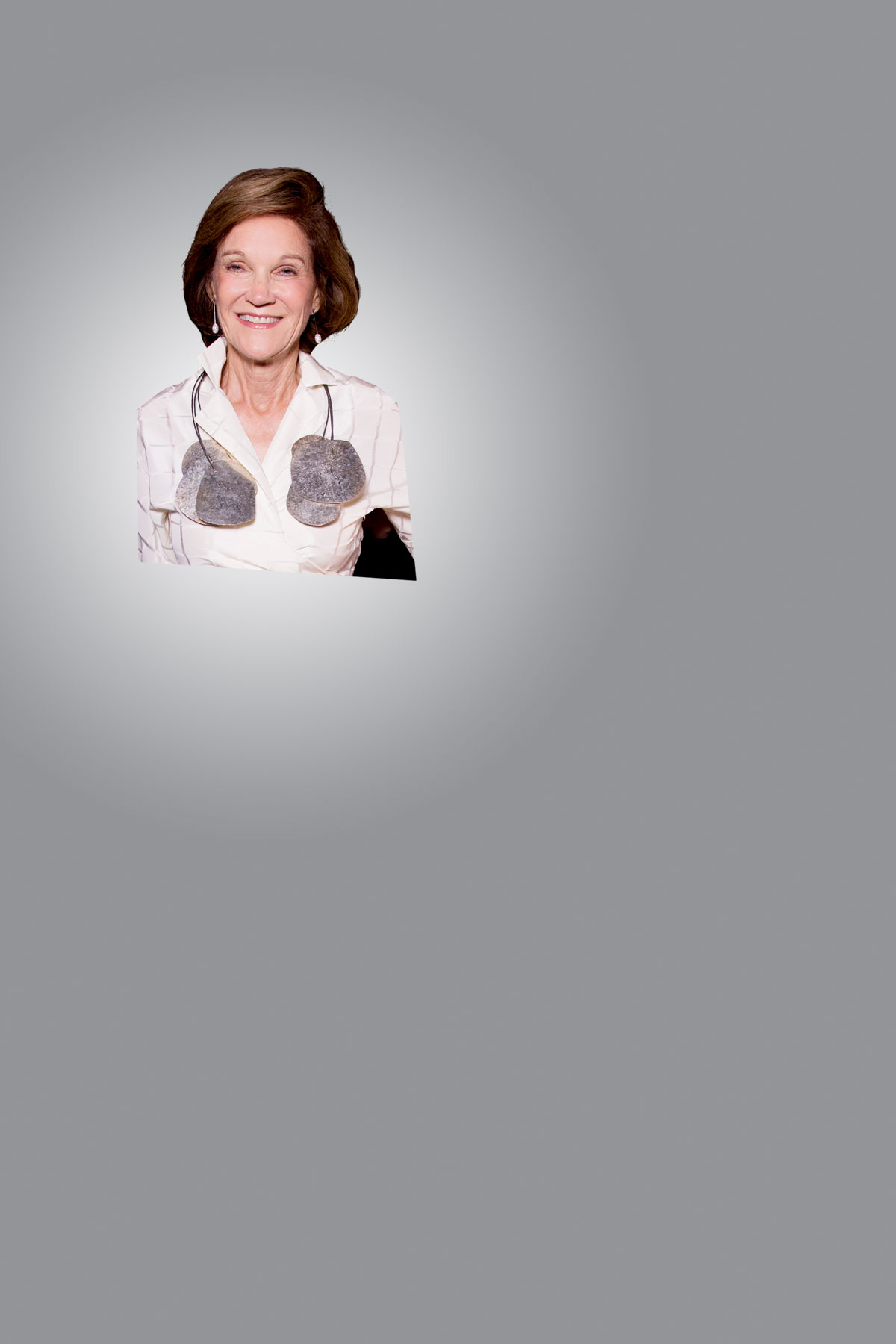 DEEDIE ROSE
Mega Art Collector. Photography by Kevin Tachman
Photography by Kevin Tachman
Byrne, who’s on the executive committee of the Dallas Contemporary, says one of the fair’s goals is to cross-pollinate incoming dealers with local institutions. Case in point: Jonathan Viner exhibited works by Dan Rees in 2012, and the following year the artist had a show at Goss-Michael. This year the fair linked with the DMA, the Nasher, the Dallas Contemporary, and Goss-Michael to offer a $1,500 pass affording entrée to seven special events across the four venues—a prime example of the unusually high degree of cooperation among these institutions.

About a dozen galleries have opened storefronts in the past few years in developing areas like the Cedars, Deep Ellum, and Fair Park. The works they present tend to be by emerging artists and priced from $800 to $10,000.

Erin Cluley was thrilled with the “overwhelming response” when at least 300 people showed up at the September 2014 opening of her gallery at Trinity Groves. She presents single-artist shows, representing Kevin Todora and four other locals plus artists she knows in the Northeast. After working the past five years as exhibitions director of the Contemporary, Cluley felt the timing was right. “I saw the support for the arts and the energy,” she says. “I’m not naive to the fact that having a business in an ever-changing industry is challenging, but I wouldn’t be doing it if I didn’t think it was viable.” On opening night, Cluley sold eight colorful, Aztec-inspired works on paper by René Treviño, a native Texan living in Baltimore, and two more in later weeks.

James Cope established his And Now gallery of emerging artists a year ago in the Cedars. A former associate curator at Goss-Michael and director of sales at the prestigious Marlborough Gallery, Cope says 70 percent to 80 percent of his clientele is in New York and Europe. “I had planned to open a gallery in New York, and I decided to open in Dallas because it’s easier here,” he explains. “It’s practical things like more space. Things are cheaper.”

Local galleries are frequently patronized by art lovers like Susan Ernst. A retired attorney and the wife of Dallas City Attorney Warren Ernst, she began studying art about four years ago by attending talks at the Nasher and joining the museum’s Avant-Garde Society, which affords access to private collections and tours. “I find the Dallas art scene is very accessible,” she says. “It was easy to get to know people, and then we started going to openings.”

Ernst has since purchased a dozen moderately priced works by local artists, including Rebecca Carter from RE Gallery and Sonali Khatti from Ro2Art downtown—both businesses that are less than three years old.

With satellite offices in Beverly Hills, Geneva, Houston, New York, San Francisco, and Paris, Heritage orchestrated about $60 million in art sales last year—about half via its Dallas home base. Ivy forecasts the category will swell to $100 million within a few years. “We are seen as an international auction firm in the same light as Sotheby’s and Christie’s in collectibles. But in fine art we are a long ways away, particularly in modern and contemporary, but we see that as the big prize,” says Ivy, who adds that Heritage’s total annual sales currently are “close to $1 billion.”