Everywhere you look across North Texas, construction cranes are flying high. With a burst of corporate relocations and expansions and brisk population growth, demand is particularly strong for new office, industrial, and multifamily space.

Massive mixed-use developments, including CityLine in Richardson and Cypress Waters near Coppell, are quickly taking shape. And several more, like Legacy West in Plano and The Star in Frisco, are getting underway.

Investors continue to have an appetite for all property types in Dallas-Fort Worth, a region that’s led by some of the top real estate talent in the nation.

Now in its third year, D CEO’s Commercial Real Estate Awards honors the best deals and developments of 2014, as well as standout individual performers in the industry. The number and caliber of entries in this year’s program made judging difficult, to say the least. But after evaluating hundreds of submissions, editors selected finalists and winners in 15 categories, from Community Impact to Developer of the Year.

The winners are profiled in this feature. Visit our commercial real estate news site, D Real Estate Daily, for in-depth stories and photos of all 51 honorees.

Real Estate Executive of the Year 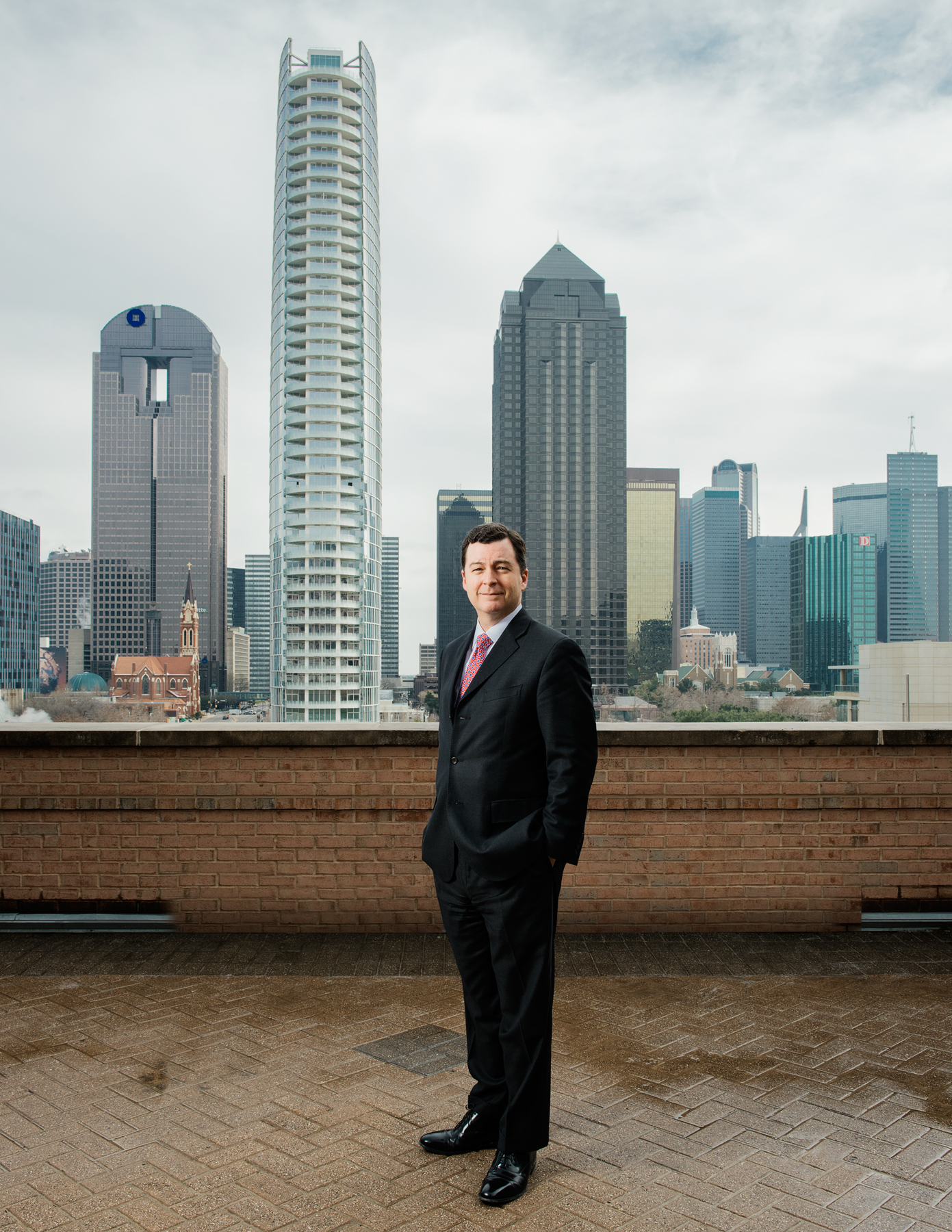 Michael Caffey comes across as a guy you’d like to have a beer with. His down-to-earth style belies the fact that he leads one of the biggest markets for CBRE, the world’s largest commercial real estate firm. As executive managing director, Caffey runs operations in Texas, Oklahoma, and Arkansas, overseeing 1,400 people from CBRE’s regional base in Uptown.

Caffey was promoted to the post in late 2013. Last year, the first in his new role, Caffey engineered two major acquisitions, including Dallas-based UCR, a deal that vaulted CBRE to the No. 1 market-share position in North Texas retail real estate. (The deal formally closed in January.)

CBRE top brass and investors love Caffey because he delivers results. His regional office has achieved three straight years of double-digit revenue growth. Brokers love him because he knows their world; Caffey used to be a broker himself. He got into real estate as a junior retail broker at Grubb & Ellis in 1994, then shifted over to the office side at Yeaman Cos., JLL, and Trammell Crow Co. After CBRE acquired Trammell Crow in 2007, Caffey was selected to lead the combined companies’ tenant representation practice. That led to a DFW market leader promotion in 2011.

Caffey says he loves what he does. “I walk in every day and get the opportunity to work with some of the best professionals in the commercial real estate industry,” he says. “It is always new and I never get tired of it.”

Broker of the Year 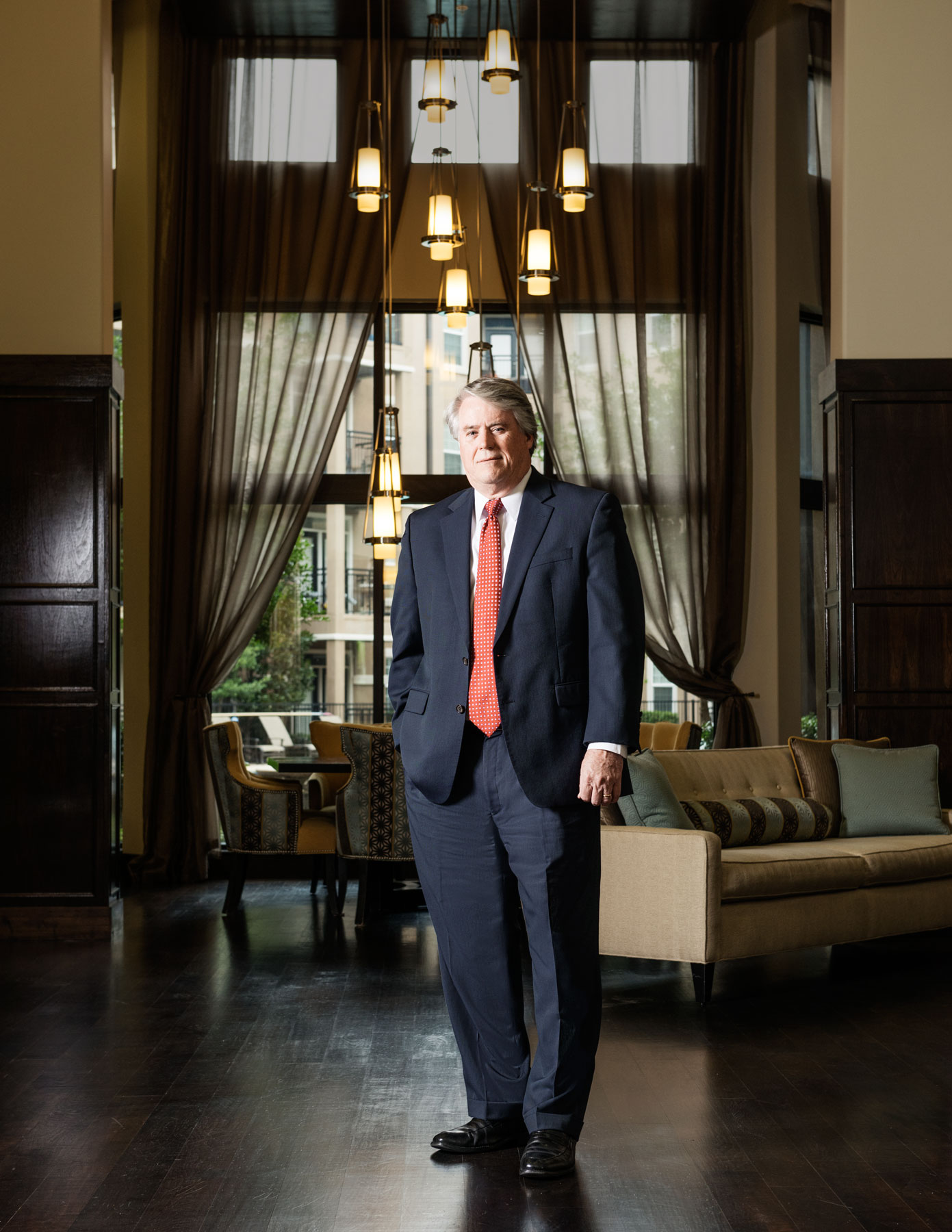 Since 2000, Brian O’Boyle has brokered $9 billion in deals. That’s billion with a “b.” In 2014 alone, he had more than 70 closings—including the sale of Lincoln Las Colinas Apartments, the largest multifamily transaction in Texas. He ended the year with more than $1 billion in production. Not bad for a guy who started his business at his kitchen table.

After graduating from Ohio University, O’Boyle became a salesman for Owens Corning Fiberglass. A few years into it, he began buying homes and small apartment properties, rehabbing them and pocketing the profits. He went into real estate full-time in 1979, working with other brokers until going solo in 1982. Today he leads a team of seven sales pros in Dallas and three in Oklahoma and Arkansas.

O’Boyle, who won the prestigious Stemmons Service Award in 2002, says he wanted his own firm so he could control his own destiny. “The early years were tough, but they taught me to master handling rejection,” he says. “I was able to carve out a niche by specializing in deals in South Dallas and Oak Cliff.”

About 15 years ago, O’Boyle formed a partnership with other area multifamily brokers to form The Apartment Network, which evolved into  Apartment Realty Advisors. ARA was acquired in December by BGC Partners, the company behind Newmark Grubb Knight Frank.

“I always thought I could be successful,” O’Boyle says. “Going from working out of your house to being purchased by a publicly traded company has been a very fulfilling experience.”

Community Impact—Deal of the Year

There are deals that bring new life to a certain property or even a submarket. It’s the rare deal, though, that transforms an entire region. Toyota Motor North America’s relocation to Plano is one of those deals. The global carmaker is consolidating its three separate North American headquarters for manufacturing, sales and marketing, and corporate operations from Kentucky, New York, and California into one big campus at Legacy West, a $2 billion, 240-acre mixed-use project at State Highway 121 and the Dallas North Tollway. The Legacy West team is being led by Fehmi Karahan of Karahan Cos., developer of the nearby Legacy Town Center; KDC; and Columbus Realty.

Steve Van Amburgh, CEO of KDC, says it took a “Herculean” effort for the Toyota deal to come together. The Legacy West team had initial conversations with the carmaker’s tenant representatives at JLL in February, and the land sale closed in time for a public announcement on April 28. During that time, KDC had to get FedEx Office to agree to move its planned headquarters across the street to accommodate Toyota’s need for a larger site, and JLL had to negotiate incentives with the city and state. And those were just two pieces of a hugely complicated puzzle.

In one of the region’s biggest economic development wins to date, Toyota’s $350 million campus will total more than 1 million square feet and employ more than 4,000 people by 2017. The relocation has elevated the “North Texas brand” to a global level, says Brad Selner, managing director at JLL. He and colleagues Paul Whitman, Brooke Armstrong, Torrey Littlejohn, Meredith O’Connor, and Michael Sessa represented Toyota. “The long-term impact on the people of this region will be felt for decades,” Selner says. “It’s a great validation of our marketplace and an unprecedented win for the city and state. This decision by a brand like Toyota will cause other companies to evaluate how and where they operate. That’s the real multiplier.” 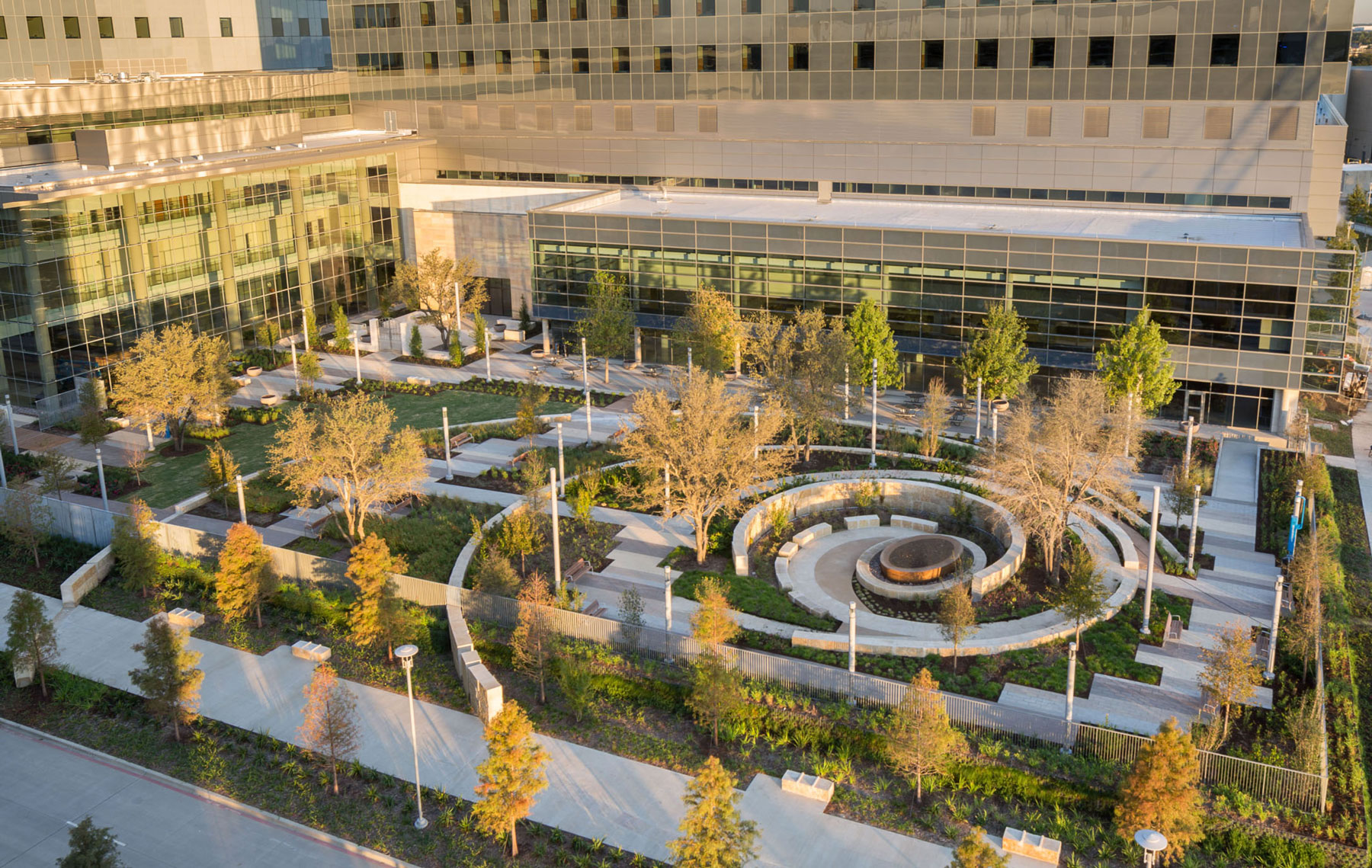 It’s hard to fathom the impact corgan has had on shaping Dallas-Fort Worth over the years. Since its founding in 1938, the firm has completed more than 125 projects in downtown Dallas alone. Its broad capabilities extend to aviation, education, corporate, mission-critical, and healthcare facilities.

The firm’s impact rang out loud and clear in 2014, when Corgan was tapped to work on some of the highest-profile projects in the region. They include the new Parkland Hospital, Love Field Airport’s terminal modernization, and DFW International Airport’s terminal renovation and improvement program. In addition, Corgan was selected as the design architect, architect of record, and/or interior designer for a number of huge corporate projects, including the 2 million-square-foot State Farm campus at CityLine in Richardson, Toyota Motor North America’s headquarters at Legacy West in Plano, and 7-Eleven’s headquarters at Cypress Waters in Irving. It oversaw capital improvements at Bank of America Plaza and the renovation of Southwest Airlines’ headquarters. And it worked with several North Texas school districts to help them develop more than $1.6 billion of bond programs for new educational facilities.

To keep up with everything, Corgan’s staff grew by 38 percent in Dallas last year and 32 percent overall; the firm expects to have 500 people on board this year. Out of room at its West End headquarters, the company had to lease 14,000 square feet of nearby space to accommodate its growth. It’s a far cry from the 13 people who worked at Corgan when CEO Bob Morris joined the firm in 1978.

“Most of the leaders who built our firm over the past 20 years are here today, building the next several generations of leaders who will continue the legacy,” he says.

When asked what has him most excited about Corgan’s future, Morris responds, “What doesn’t? The story of where we started to where we are tells me our potential has no boundaries that we ourselves haven’t created and can’t overcome.”

North Texas saw a flurry of mixed-use announcements in 2014, and several promise to be quite impressive. But the bar has been set extremely high by CityLine. What began as a 1.5 million-square-foot corporate campus for State Farm has evolved into, well, a city. Designed by Corgan and developed by KDC, the 186-acre project sits along a DART rail line where North Central Expressway meets State Highway 190.

“The success of CityLine is amazing,” says Randy Cooper, vice chairman at DTZ. He and colleague Craig Wilson provide tenant representation for State Farm. “If there [had been] problems with the development, the expansion would not have occurred,” Cooper says. “KDC delivered on everything they promised.”

That promise was to provide a top-notch live-work-play experience for its office tenants. It’s being delivered with a LOOK Cinemas dining and theater complex, an Aloft boutique hotel, a trail system and 3.5-acre park, wellness and fitness facilities, and Coal Vines, Jasper’s, and other restaurants. KDC tapped JLB Partners to handle the multifamily components of CityLine, and Regency Centers is developing an on-site, Whole Foods-anchored retail center.

In the not-too-distant future, the daily population at the mixed-use project will top 15,000. But the impact doesn’t stop there, says Steve VanAmburgh, CEO of KDC. “There have been several hundred million dollars of new developments announced in the last 90 days that are directly adjacent to CityLine, and none of that would have happened without CityLine,” he says. “We believe it’s just the start.”

A deal this big doesn’t come together overnight. In fact, it took two years of prep work before Procter & Gamble signed its 1.4 million-square-foot lease at DalPort Trade Center in Wilmer. While JLL’s Terry Darrow and Michael Swaldi worked out transportation and logistics issues for their client—one of the world’s largest consumer goods conglomerates—Panattoni’s Rob Riner was assembling a team to help him win what was known then in the market as “Project Sunshine.” On board were Alston Construction, Alliance Architects, Pacheco Koch, and leasing agent Nathan Orbin of JLL.

By the time P&G came to tour the tract of land that Panattoni controlled, Riner’s civil-engineering team staked out where the massive building would be constructed. “We had to paint and plant the picture firmly in the minds of the decision-makers,” he says. “Mind you, this was a 76-acre crop maze. So we used 10-foot sticks with different DayGlo-colored survey ribbons to achieve that on the bus drive-by tour.”

But, winning the deal called for much more. P&G and its brokers analyzed everything from how the trucks would queue up (1,000 trucks in and 1,000 trucks out per day) to how many right-hand turns the drivers would have to make. “It’s not a simple process,” Darrow says. “The industrial real estate business is very complicated.”

That’s especially true in North Texas, according to Riner. “DFW is a tough market in which to excel,” he says. “As Frank Sinatra said, ‘If you can make it here, you can make it anywhere.’”