Several years after the financial crisis decimated the mergers and acquisitions industry, the drought is over and flowers are sprouting and starting to bloom again. A D CEO analysis of numbers from data provider Factset found at least 38 M&A deals involving North Texas businesses or investment shops that were completed last year and worth a baseline of $195 million or more. All told, those completed deals were worth a combined $45.7 billion.

Though not yet as bountiful as the go-go years of 2004-2006, M&A deals have made this comeback because of the improving economy, cheap debt that’s increasingly more available, and the willingness of sellers to accept prices that are more in line with what buyers are willing to pay. Also, many buyout funds are sitting on big piles of capital that they’ve needed to put to work.

“Prices are going up,” affirms Jan Sharry, a partner in the corporate transactions group at Haynes and Boone. And one of the primary metrics for determining M&A prices—multiples of target companies’ earnings before interest, taxes, depreciation, and amortization (EBITA)—are “going way up,” she adds. “There is a lot of interest in deals, a lot of auctioning.” Attests Gary Kennedy, recently retired as general counsel for Fort Worth’s American Airlines: The M&A sector “is recovering. We will see more activity in the coming months.”

We’re proud to honor the North Texas companies and dealmakers who’ve participated in this recovery with our 2014 Mergers & Acquisition Awards, presented by D CEO and the Association for Corporate Growth. On the following pages we profile the program’s finalists; the winners will be revealed at an awards event in May. Our judges for the program were: Tony Banks, director of business development, Hein & Associates LLP; Mike Ehlert, senior vice president, Capital One Business Credit Corp.; Eliot Kerlin, partner and co-head of deal sourcing and structuring, Insight Equity; Tony Neveling, chief financial officer, eMortgage Logic LLC.; and Brad Purifoy, partner and managing director, Corporate Finance Associates. We’re grateful to them for their time and support.

Landpoint
It wasn’t that Landpoint Inc. was hurting. The Bossier City, La.-based land-surveying business was highly profitable and had plenty of business coming from some large customers, especially in the Eagle Ford Shale oil play in Texas. “We had some individual clients that wouldn’t stop growing,” says Chad Souter, vice president at Landpoint.

But the company faced potential issues that could put it in a world of hurt. A concentration of large customers meant the company could be damaged if, say, a major client bolted. And eventually, all energy patches get worked over, meaning Landpoint had to diversify where it did business.

Fortunately, a team of advisers in Dallas was there to help. Led by investment banker Terry Fick and Patton Boggs partner Gina Betts and associate Meadow Clendenin, North Texas advisers to Landpoint helped locate two companies to acquire, hammered out the deals, and arranged debt financing. Mezzanine debt came from Chicago-based Monroe Capital LLC, a business lending and investment shop that has a Dallas office.
Thanks in large part to the work of the North Texas advisors, Landpoint got deals done for Fort Collins, Co.-based King Surveyors LLC and Texas’ own West Co. of Midland LLC.
Today Landpoint has roughly 170 employees, and has diversified its business base to include the Permian Basin and general surveying work. “It’s been growing so fast,” Souter says. “Since December, we’ve been trying to keep up.” —Jeff Bounds

When Nekoosa snapped up IGI last year, it doubled in size, going from $50 million to $100 million in revenue, while employment grew from 86 to 210. Nekoosa sells specialty paper used in digital printing to commercial printers, while IGI products are sold through distribution channels to sign shops, such as Fastsigns.

“They have different customers, but they’re converging,” Reed says. The two industries Nekoosa and IGI play in “both rely on digital print technology to get into each other’s businesses.”

In other words, Nekoosa’s products can sell to IGI’s customers and vice-versa, Reed says. That means the purchase agreement will turn Nekoosa into a proverbial one-stop shop for customers who need digital printing. Reed conceded there were risks to the deal, especially in integrating two similar-sized companies with overlapping sales forces and management teams.
But thanks to Nekoosa’s management team, led by chief executive Paul Charapata, the integration has gone smoothly. Says Reed: “We’re exceeding our plans for the combined business, at a time when you’re often hearing about companies underperforming because of an integration.” —J.B.

Park Cities Bank, Commerce St. Capital
When the team at Commerce Street Capital set out to help North Texas Bancshares come up with a solution for its distressed asset portfolio three years ago, they had no idea how complex the task would be. Set against the backdrop of an economic downturn, North Texas Bancshares’ operating unit, Park Cities Bank, saw its struggles rapidly intensify, and Commerce Street began pursing options that included selling distressed assets to strategic buyers, an outright sale of the bank, and raising money to recapitalize and reposition the bank.

But with the economy working against them, each of these options failed when attempted separately. “We were in the doldrums of a down market, so it was difficult to find a bank to take on the credit risk,” Hatch Cummings Smith Jr., vice president and head of institutional sales of Commerce Street, says of the possible bank sale. “People just didn’t know how much farther the knife would fall.”

During the course of the deal, Park Cities Bank saw its assets drop from nearly $900 million to $405 million, and deposits plummet from $835 million to $380 million.

But by drawing on specific elements from each of the failed attempts, Commerce Street was able to come up with a solution that called for Olney Bancshares of Texas to purchase North Texas Bancshares out of Chapter 11 bankruptcy for $11.4 million. The sale was approved by the bankruptcy court in December.

“There were a dozen times throughout this that we thought it wasn’t going to go anywhere,” Smith says. “But we always knew there was some value there. It was just a matter of finding the right deal.” —Tanya Rutledge 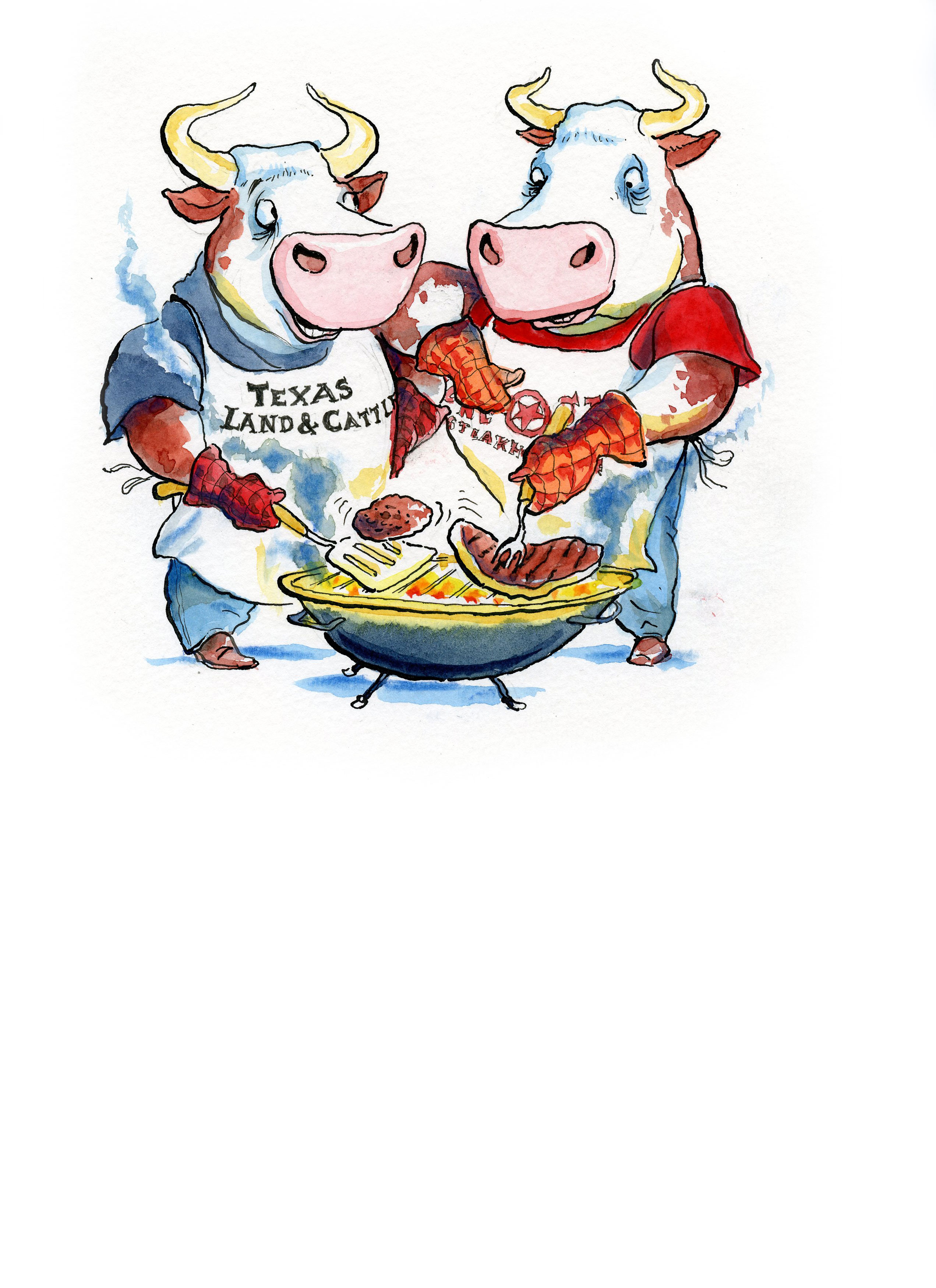 Unless you’re in retail, the period between Thanksgiving and Christmas is usually pretty slow. But last year, those four weeks got very busy for Scott Smith and Tim Dungan.

Near the end of November, the pair reached a principle agreement to buy a pair of North Texas-based restaurant chains where they served in senior executive roles. Terms weren’t disclosed of the deal with the Dallas private equity giant Lone Star Funds for the purchase of Texas Land & Cattle and Lone Star Steakhouse.

Problem was, they had to close the transaction before year’s end. No small task, considering the two chains combined have 105 outlets and nearly 3,000 people spread across dozens of states. Not to mention the presence of various lenders and purchasers of other assets.
Forget three-level chess. “It was like playing five-level chess,” says J. Holt Foster III, a Thompson & Knight LLP partner who represented Day Star Restaurant Group, the holding company that Smith and Dungan formed for the two restaurant chains. (Smith is chairman and CEO; Dungan, president and CFO.)

But, thanks to determination from all sides, the deal got done. Now Smith and Dungan are using revamped menus and other tactics to get both chains ready for expansion in the next two to three years. “We’re typically spending $1 million to $2 million a year on capital reinvestments into the physical infrastructure” of the chains, Dungan says. “As we proceed, that will inrease.” —J.B.

Crossmark Inc., Marketing Werks Inc.
Crossmark Inc. is probably the biggest North Texas company you’ve never heard of. And, thanks to a significant 2013 purchase, it just got bigger.

With a client list that reportedly has included the likes of Kimberly-Clark Corp. and Kraft Foods, privately held Crossmark is a marketing and sales company that ensures product makers get optimal shelf space, placement, and other necessities to move their wares in retail stores. Last year, the company broadened its reach into a trendy area called “experiential marketing” by purchasing Chicago-based Marketing Werks Inc.

Just like vacuum salesmen once demonstrated their wares door-to-door, experiential marketing aims to break through the clutter of sales messages that consumers are exposed to today by having them try products first-hand. “Brands like to talk to people outside the store” as well as inside, says Jim Rose, Crossmark’s president, marketing services.

The deal added some heft to Crossmark, pushing its annual revenue to nearly $1 billion and its worldwide employee count to nearly 36,000. With about 800 workers when the transaction was announced in September, Marketing Werks saw its annual revenue soar from $38.2 million in 2007 to $99.1 million in 2010, earning it a spot in the Inc. 5000. It also added key capabilities to Crossmark, giving it the ability to cross-sell its existing services with Marketing Werks’ experiential marketing offerings, Rose says. “We went for the biggest and the best” in buying Marketing Werks, he adds.

Daseke Inc., Boyd Bros.
Driving down the freeway, you may occasionally see flatbed trucks hauling oversized loads such as equipment for construction, aviation, oil drilling, and mining. And when you see those trucks, you might think, “Boy, driving one of those things looks like hard work. Must be a tough business.”

Here’s the truth: It’s even tougher than you think.

A new generation of young adults simply doesn’t want to spend so much time on the road. Many truck drivers are overweight, smoke, and have health problems, and work for less than what they might earn in stay-at-home jobs.

North Texas businessman Don Daseke is out to give specialty flatbed truckers a new option. His seven-year-old, Addison-based business, Daseke Inc., is taking a different approach to rolling up the fragmented flatbed truck industry, which has no dominant, publicly traded leader.

The company’s 2013 purchase of Alabama-based Boyd Bros. shows how. Daseke is buying well-run, family-owned shops like Boyd, keeping management teams in place, and giving his long-haul truckers stock options in anticipation of an eventual public offering a few years down the line.

Transition Capital Partners Sale of LT Energy Services
As Transition Capital Partners was acquiring portfolio company LT Energy Services in April 2012, TCP managing director Kevyn DeMartino set a turnaround goal that even he thought might be a little unrealistic. He told his colleagues that he hoped to stabilize and sell the company within two and a half years, well short of the typical three- to five-year hold.

Twenty months later, LT Energy Services was acquired by publicly traded B/E Aerospace for eight times the return to investors. “It’s rare when you get that kind of return in that time period,” DeMartino says. “It just doesn’t happen.”

During those 20 months, TCP helped stabilize LT Energy Services, which provides rental equipment and workforce accommodation systems to oil and gas producers. The changes enabled EBITDA to soar by 485 percent and the company’s headcount to grow from 11 to more than 100 employees. TCP also expanded LT Energy Services’ footprint from one oil basin to four plays, opening three additional yards that spanned three regions.

But that’s not to say that the process wasn’t without its challenges, including the discovery of two years of owed invoices totaling $700,000 that had not been submitted in a timely manner by a vendor. “There were a lot of hiccups along the way, and we were also managing hyper-crazy growth at the same time,” says DeMartino, who worked closely with TCP principal Jake Williams on the deal. “I lost what little hair I had, but we got it done.” —T.R.