Taken together, Hodges Capital Management, a traditional, family-run investment management firm, and Dallas native Edward Loar would seem to have little in common. One manages millions of dollars in client assets. The other is a promising professional golfer. But they’re in a partnership they hope will benefit each other, with the small Dallas firm entering the world of national sports marketing as Loar’s shirt sponsor.

“Big companies like Merrill Lynch and Charles Schwab wouldn’t sponsor golf and golfers if it wasn’t successful,” says Craig Hodges, CEO of the firm his father, Don, founded in 1989. “We view [Loar] like us. We are a solid, emerging money management firm, and he is a solid, emerging professional golfer. It’s a win-win because, as he becomes established as a big name on the golf tour, so will we.”

This is Loar’s second full year on the PGA Tour, where he competes against Phil Mickelson, Bubba Watson, Rory McIlroy, and fellow Dallasite Jordan Spieth on a weekly basis. The golfer, who lives in Rockwall, wears the star-emblazoned Hodges Funds logo in a variety of colors during every professional round as he travels across the country.

“I’m a low-key guy, but I want to be a big part of their success, and they are looking forward to helping me and my career,” Loar says. “If anybody asks about Hodges when I’m on the course, I’m happy to tell them about it.”

The partners initially got together through a series of family circumstances. Loar’s sister had once worked as a nanny for Craig’s children. Later, the family, including Edward’s father Jay Loar, former Southern Methodist University golf coach, became a client of the firm. The Hodges came to hear about Edward, a Dallas junior golf star who played at college golf powerhouse Oklahoma State before turning pro. After Loar gained his playing card for the PGA Tour in 2014, Clark Hodges, Craig’s brother and the firm’s chief marketing officer, began working with the golfer and his agent, Blake Smith, on a sponsorship deal.

“We’re very comfortable with him and his family and his solid Dallas background,” Hodges says of Loar. “You never know when lightning will strike; guys come out of nowhere to win all the time.” 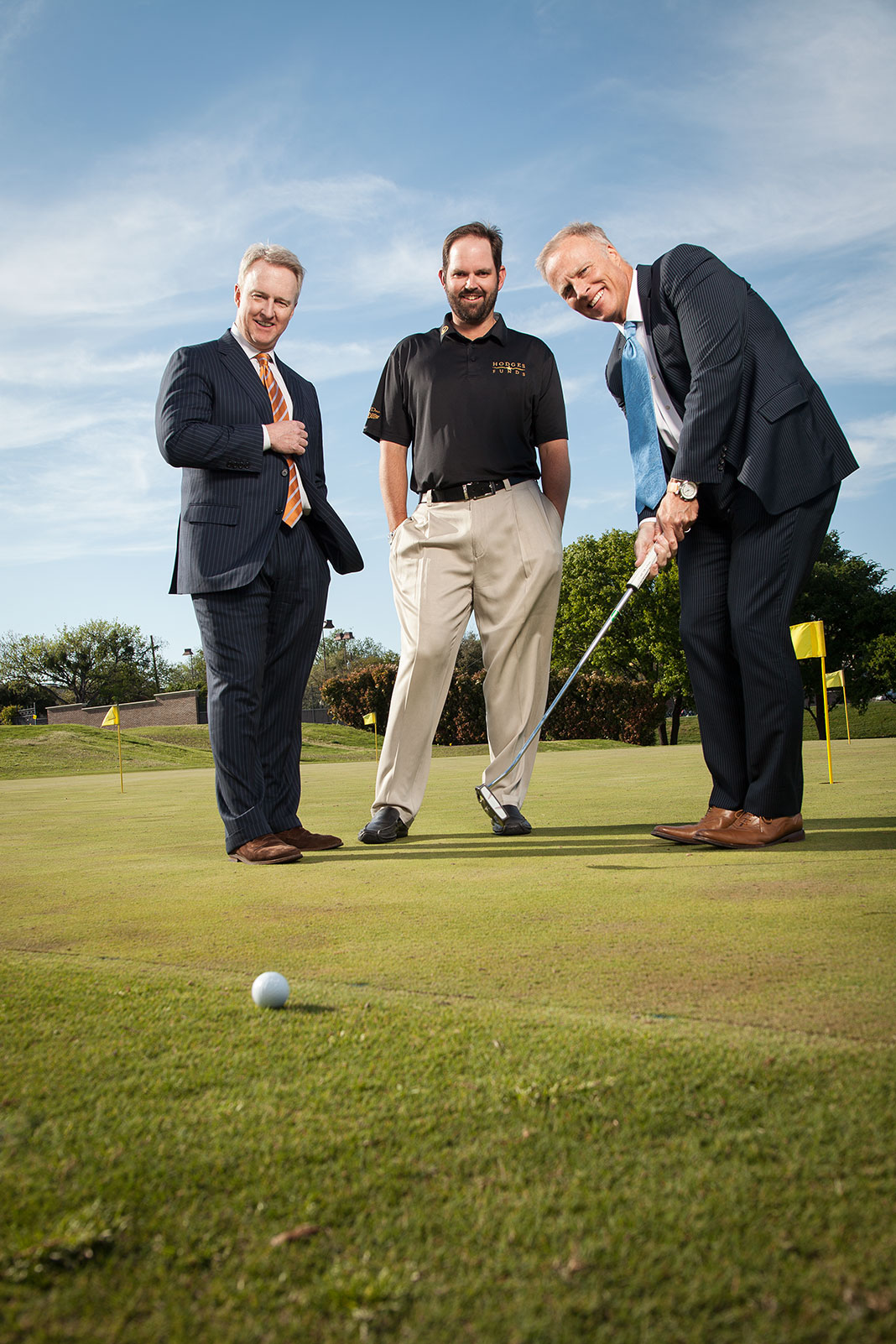 PAR FOR THE COURSE: Hodges Capital hopes its sponsorship of Loar will bring in big returns as he continues on the PGA Tour.
Although the on-course results have been a bit disappointing so far in 2014, with Loar making just one cut in his first 10 tournaments, the sponsorship has already had one huge success. During the PGA Tour’s Humana Challenge in Palm Springs, former President Bill Clinton, the tournament host, walked up to Loar and began talking with him. A photo was taken of the two having a conversation, with the Hodges Funds logo clearly visible. It was published by newspapers and golf magazines around the country and throughout the sporting world.

“When I showed that photo to my dad, he was blown away,” Hodges says.

Clark said he wasn’t sure the company could afford the sponsorship. But the investment can pay quick returns, he says. “It can pay for itself in one week if he gets on TV or plays late on Sunday afternoon,” he says. “All we need is one person to see the Hodges logo on TV and go to the website and check our performance, and it’s worthwhile.”

Tiger Woods gets a reported $100 million to represent Nike on an annual basis. Hodges pays Loar considerably less; the agreement is valued in the high five figures, with the chance to go to six with incentives. Under the terms of the two-year deal, Hodges is paid an annual amount, with a larger bonus built in for PGA Tour and major championship victories. Loar also will give a clinic and play golf with some Hodges clients.

So, although The Wall Street Journal is still the publication of choice in the Hodges’ historic headquarters in downtown Dallas, and financial news plays constantly on the television in Craig’s upstairs office, he and Clark scan the golf scores when Loar is playing, and switch over to the Golf Channel if need be. But that’s about as involved in the game as they get.
“I don’t give them stock tips and they don’t tell me how to play golf,” Loar says. “It’s working out pretty well.”