A few months ago, Flexjet president Deanna White hopped on one of the company’s private planes and headed for West Palm Beach, Fla. Since assuming the top post in October 2012, White had made a habit of flying around the country, trying to meet all 750 of her employees. It’s a big task, especially because 65 percent of them don’t work at Flexjet’s headquarters in Richardson.

White arrived in West Palm with her senior management team and walked into a room of 25 pilots. The pilots sat at tables, eager to meet their new boss, who had recently been promoted from vice president of finance and administration. White introduced her team one by one. Then she turned the exercise on its head.

She then went from table to table, not only naming the pilots, but reciting something memorable about each. She only missed one.

Since taking over Flexjet’s presidency from 30-year aviation veteran Fred Reid last fall, White has made it a point to manage the company not only operationally and financially, but also in a very personal way. These personal relationships—and the emotional intelligence it takes to nurture them—are what will propel the company in the future, she believes. And those relationships don’t stop with the employees. They extend to the customer, future customers, and even competitors.

“I don’t need to know how to fix a plane. But I do need to know how to build a strategy for a company and hire the right people in those positions, to execute on every level,” she says. “It takes a lot of communication, both internal and external, to the customer and the industry.”

White, who’s 48, should know. She started at Flexjet in 2005 as a finance director, and was promoted two years later to senior director of finance. In 2010 she was promoted again to the VP of finance and administration job. Before joining Flexjet, she’d worked 15 years for GTE, a company that later merged with Bell Atlantic to become Verizon. After that she was director of accounting for an Internet concern called Genuity, which was spun off in the Verizon deal.

Flexjet is an 18-year-old subsidiary of Canada’s Bombardier, the world’s largest business-aviation manufacturer. Its customers include entrepreneurs, Fortune 100 CEOs, company board members, and public-sector executives who use Flexjet for personal travel. In 1995 the company jumped into the fractional-jet market, where customers buy only a pro-rated share of a plane, not the entire plane, and are allowed to use it based on their percentage of ownership. Flexjet now offers fractional-jet ownership as well as whole aircraft ownership and management, charter brokerage services, and jet (or debit) cards. Under the latter option, which is the least-expensive entry point for customers, they’re allowed to pay for and use $100,000 worth of Flexjet services, for example, and reload the card as necessary.

Today Flexjet is the second-largest fractional-jet company in the world, behind only Berkshire Hathaway’s NetJets. Even so, White has experienced a number of peaks and valleys in the company’s fortunes during her eight years there. 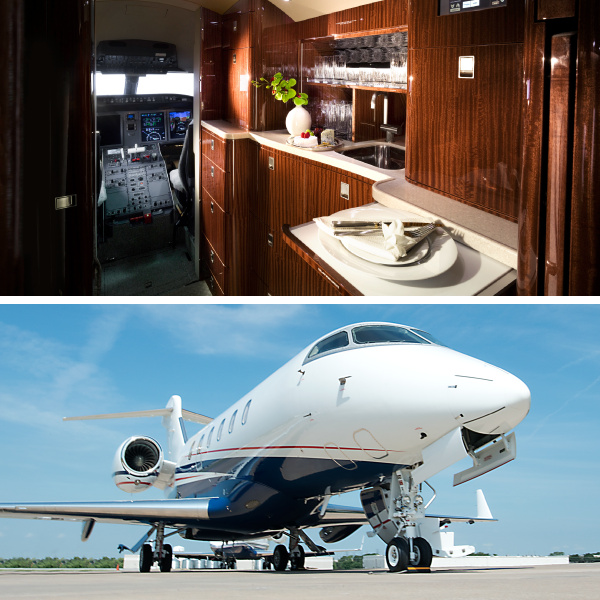 For Flexjet—and, indeed, for the entire fractional-jet market—2007 was the peak. Cash was plentiful, and the use of private jets was at an all-time high. Then, in August 2008, Lehman Brothers filed for bankruptcy, and the U.S. economy began to crater. Aside from the possible discovery of plane-eating bird monsters, it’s difficult to imagine a scenario that could have affected the jet market more. Private business travel plummeted, hitting Flexjet hard. As budget-conscious executives switched to commercial travel or began curbing their fractional jet use, the Richardson company laid off pilots, furloughed other employees, and slashed the size of its fleet.

“People just stopped flying,” White recalls. “They started being more conscious of their spending. We saw a lot of people exit merely for underutilizing. People sign contracts for us for multiple years, and they just weren’t utilizing [them].”

White stresses that clients weren’t fleeing to other companies; they simply were leaving the market altogether. So she seized on the trend as an opportunity.

During the Great Recession, she recalls, more and more niche competitors began cropping up offering debit card-style programs instead of fractional jet ownership. Even though debit programs shift the burden of jet ownership from the (fractional) customer to the company provider, Flexjet decided to increase its involvement on the debit side significantly. In 2007, about 15 percent of the company’s business was jets for the debit program. Today it’s 30 percent. White expects the figure to climb to 50 percent in the future.

This new direction seems to have worked out. As the recession eased, Flexjet bounced back. In the first quarter of 2013, for example, revenue was up 83 percent over the year-earlier quarter. For the first six months of this year, fractional and debit-card sales increased more than 60 percent over the first half of 2012.

The Dow Jones assault on the 15,000-point mark has helped calm executive travelers, bringing them back into the private jet market. The company is hiring back pilots and unveiling a new line of airplane options for travelers. White has also brought on Lori Carr to serve as the company’s first “owner experience officer”—a position that could help with the continued return of customers to the Flexjet fold.

Observes Carr of her new boss: “Deanna’s head is almost always in the cockpits with the pilots, talking to them.” Meantime, Bombardier CEO Pierre Beaudoin has lauded White’s “passion for driving strategic change and implementing business plans that support the organization’s long-term strategies.”

High praise from a man at the head of a Fortune 500 company valued at more than $32 billion. And to think that, for White, it all started at a Steak ’n Shake in St. Petersburg, Fla., where she grew up. 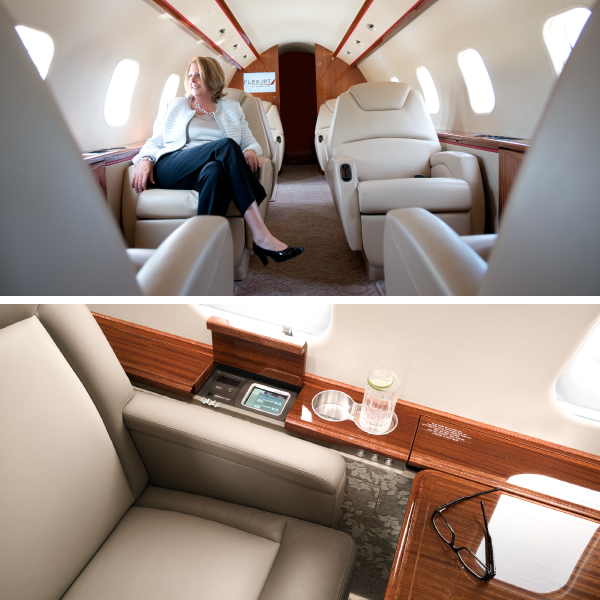 FROM BURGERS TO ACCOUNTING
Long before joining Flexjet, White delivered food on roller skates. After entering the work force at the age of 15, she eventually graduated from burgers and fries to red-sauce Italian, helping to pay for college by waiting tables in Tampa, Fla. Every summer she’d take a different internship, helping some company with its books. First there was the fence subcontractor with no accounting system, then a PR firm with similar woes. She worked throughout her undergrad years at the University of Tampa, graduating with an accounting degree. From there she headed to GTE and eventually Genuity.

White’s time at Genuity offered business life-cycle lessons that she was able to apply during the recent recession. She was part of the team that created Genuity’s initial public offering—and was still there when the company went bankrupt.

“My whole life I’ve been a very observant student, and I can see what’s important, what not to do,” White says. “When you’re deconstructing a company, it’s very interesting to see what’s the core, important part that has to stay to the end, and the other items that aren’t so important. And that core should always be functioning well.”

Along the way she took time to have a son, Bennett, who’s now 9. In between flights and meetings she would take over as his baseball team’s scorekeeper, and only missed one game all last season. (During that game, she had another parent text her the play-by-play.)

Being a single parent as well as the head of a multimillion-dollar company is a responsibility that requires balance—and more than a little executive savvy. Take a typical Friday night. White will pick up her son from school, then offer to let one of his friends stay over, too. “Wouldn’t you like a night out with you and your husband?” she’ll ask another parent, sweetly. The friend stays over, then White cashes in that credit down the road, when a business meeting runs late or another flight to West Palm Beach is required.

But White’s a learner as well. One night, she was helping Bennett with his math homework. They were tackling a word problem together and, tired from the day, White nudged along her son’s thinking, essentially giving him the answer. He put down his pencil, looked up at his mom, and said: “Mom, you’re stealing my learning.”

She realized he was right and quickly apologized.

“Every single time a leader doesn’t delegate, or let the people below them have the ability to fail, they are stealing their learning,” White says. “And luckily in my career, I didn’t have people who were stealing my learning.”

White also joined Flexjet at a time when female executives were on the rise in an industry long dominated by men. At her first Bombardier senior leadership meeting in 2006, she walked into a conference room and saw only a handful of women in a large conference room filled with dozens of tables. The women all sat at the same one.

Today White can rattle off a long list of female Bombardier executives: “I’m one of the seven direct-reports to the CEO who is a woman,” she says. Bombardier has “three business units, and one is now led by a woman … and both other units have a woman CFO.”

Being a female executive carries both positives and negatives, she says, just as being a male executive does. Women are less likely to take a new position until they’re 110 percent ready for it, she says with a laugh, while men “will take it at 60 or 70.” Women are refined multi-taskers and observers and manage the emotional intelligence of situations and companies, she believes.

“And at the top levels, I think collaborating is a strong suit,” White adds. “They say men go to the bathroom one at a time, and women go in a group. We look for win-win, collective solutions. When working with peer executives, you have to be able to collaborate.”

In the 11 months since assuming the president’s role, White has worked hard to gain the trust and admiration of Flexjet’s employees. The “next step,” she says, is continuing to bring the company out of the deepest recession her employees may ever see—and building a team that’s committed to doing the same.

“Deanna’s style is really about building commitment in the organization and getting corporate buy-ins, getting all the employees fully aligned in what our core strategies are, and how we build the company” says Bruce Peddie, Flexjet’s VP of sales and marketing. “She’s been able to really get us focused on a clear direction and identify those directions in a simple form, then lay them out to get us all moving in the right direction.”

Oh, and she has identified one more task for herself, too: Learning the rest of those 750 names.