Nobody blinks an eye when a parent hands off the family business to an aspiring son. It’s far less common to see a parent grooming his or her daughter to inherit the business. But we’ve found not one but several successful family-owned businesses with parents at the helm who are working side-by-side with their daughters and planning to pass them the baton.

From an early age, these daughters were exposed to the business almost through osmosis—at the dinner table, during early-morning jogs, on family vacations to business-trip destinations. Their parents nurtured their interest in the business, sometimes encouraging them to explore outside opportunities, then welcoming them back to the nest when they were ready to jump in with both feet.

Here are four of their stories.

Crawford Brock is extremely competitive, perhaps even obsessive, about managing his fashion temple, Stanley Korshak. That’s why the question of succession simultaneously absorbs and conflicts him.

“When do I give up the full reins—that’s a tough one,” says Brock, 59. “I’m still young, and I think I’m going to be here a long time, which means for sure another decade. I really don’t want to be sitting around in retirement.”

But Brock is a pragmatist, not to mention a devoted father, and he’s been grooming his three daughters from birth to embrace the luxury retail business.

“My sense is they need to want it, and I’m here to help,” he says. “I understand that it’s long hours, a lot of pressure, a lot of commitment.”

“Fun” is how the sisters most frequently describe their jobs. Did they always want to work in the store? “Being surrounded by all this? What girl wouldn’t?” says Leigh, who handles public relations for Stanley Korshak.

It might appear that the princesses are swan-ning about the castle. But they each hold bachelor’s degrees—Laura and Helen in business and finance, Leigh in nutrition—and they all started at the bottom in the mailroom, rotating through various departments in the store. Brock proudly asserts that they “are not arrogant types,” and “wouldn’t ask anyone to do anything they wouldn’t do.”

“We can gift-wrap; we can do everything,” says Laura. A math whiz, she analyzes budgets and tweaks inventory planning as assistant to general merchandise manager Rose Clark.

Helen, the youngest, has the broadest industry experience. Before joining the store in January 2012, she interned in New York with top fashion firms Brunello Cucinelli, Lela Rose, Naeem Khan, Ralph Lauren, and Manolo Blahnik. She also worked the sales floor at Mitchells and Richards in Greenwich, a store comparable to Korshak. Helen now buys knits, sweaters, and t-shirts for the Shak, Korshak’s contemporary boutique geared toward youthful clients.

“I love it,” she says. “It’s really fast-paced and I’m always on my toes. I’m learning a lot from the [Shak’s] head buyer, Shannon Moore.”

“We’re all in roles that suit our personalities and the way we tick,” Leigh notes. “I’m good with customers and people, and Laura is really strong with numbers. Helen has incredible taste and is an incredible seller, but she also understands the financial side. So we all bring something to the table. We each have a piece of [Brock] in us—Laura probably being the most like him, constantly thinking about the business and what we can do to improve.”

Brock, who bought the store from Caroline Rose Hunt in 2002 after managing it since 1987, cut his teeth in Neiman Marcus’ executive training program and in subsequent buying and management roles, where he learned to set far-range goals. Now he’s trying to instill a strong work ethic in his heirs.

He often reminds them that “hard work pays off because there are no shortcuts,” Helen says.

Brock calls his daughters his “exit strategy.” But he’s also aware that nothing is certain, and he’s too gallant to pigeonhole them.

“If this is what they want, that’s great,” he says. “If 15 years from now they are raising kids and don’t want to do it and want to sell, there are lots of options.”  — HOLLY HABER 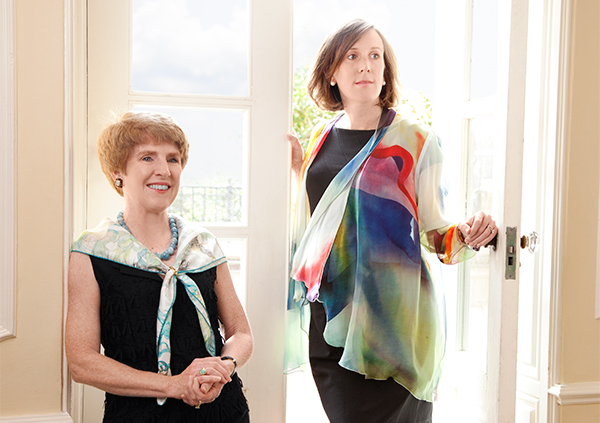 Call it a defining moment or a twist of fate. Either way, it’s hard not to chuckle when you hear Lucy Burns’ response to the question posed in her first-grade yearbook: What do you want to be when you grow up?

“I said ‘a person in real estate,’ not realizing what that was,” the 33-year-old says. “It was something that I was aware of before I knew what that meant. That, or I just wasn’t very creative.”

It’s hard to imagine that the granddaughter of the legendary real estate developer Trammell Crow—and the daughter of Crow’s daughter Lucy Billingsley and her husband, Henry Billingsley—could pursue anything but a career in commercial real estate. Of the four Billingsley children, only Burns and her brother, George, work in the business. Burns manages Billingsley Co.’s 2 million-square-foot office portfolio, which includes International Business Park and the Arts Plaza campus in the Dallas Arts District. George is responsible for industrial-portfolio management, development, and financing.

Lucy Billingsley says she and Henry have put their children “into asset ownership from Day One,” giving them a “wonderful platform from which to start.”

“We’ve always been open about how things are organized, who’s got what, and why we’re doing it this way,” she says. “If you want to go into this business, you can. This is yours to be figured out at some point if you go into another business.”

Burns says she never felt pressure to work with her family, but expected she’d do something real estate-related. After a stint at Lehman Bros. in New York City, she pursued a master’s degree in real estate development. In 2006, she landed at The Ratkovich Co. in Los Angeles. Two years later she joined her parents at Billingsley.

“I’ve worked for other real estate development companies, and I’ve worked here,” she says of the 35-year-old Billingsley company, which has nearly 130 employees. “Both were great experiences. You learn a lot from both platforms, but one of the benefits of working with families or parents is you get to learn everything they know.”

Some families resolve disagreements by arguing or shouting at the office. The Billingsleys are a less emotional bunch, with a healthy dose of respect for each other. So those conversations are more candid than raucous.

“The problem is, I am frequently the one who gets outvoted and everyone is laughing hysterically when it happens,” says Lucy Billingsley, who admittedly prefers the “wild-hare” deals, while Henry is more conservative and Burns, more bullish.

Burns describes the office environment as didactic. And if she wants her parents’ opinion, she’ll ask for it.

“They’re never hovering around telling me how to do things, unless something is blatantly wrong,” she says. “I think that makes for a very easy family working environment, because no one wants to show up to work and have their mom telling them what to do all day.”

Billingsley, who declines to disclose the company’s annual revenue, takes the approach that young people are highly competent—and there’s nothing they can’t rise to the occasion for and then do.

“The exposure that our kids or others in this company get is really because we say ‘just do it,’” she says. “The important thing is, your career is where you get to have a platform in the world for creativity, self-expression … and for making money. What’s the best platform you can create? I want my kids to have those platforms, but I want to have them, too. This is a situation where each of us can create that.”

The easygoing relationship between mother and daughter is evident as they share sweaters in their chilly Uptown office and discuss the imminent birth of Burns’ twins. They will soon need to make more space on Billingsley’s wall of black-and-white family photos.

Retirement may never fully come for Billingsley, 59, even when it’s around the corner. But she’s glad to have her daughter by her side.

“Daughters do need to be in the business,” she says. “It’s way too much fun to give this to the guys.” — KAREN NIELSEN