Last Year, CEOs of North Texas midsize companies saw a significant increase in compensation. So, with the economic recovery chugging forward, did their wallets get even fatter in 2012? According to an exclusive study by D CEO magazine and Paradox Compensation Advisors, it’s a matter of interpretation.

This is the fourth year for our annual report on executive compensation trends among midsize public companies in Dallas-Fort Worth. Although salary information for the large-company CEOs is widely reported elsewhere, D CEO is one of the few, and the only in North Texas, to focus on middle-market company compensation trends.

New this year: an analysis of pay for the chief financial officer, a key executive post that has expanded in importance and public profile since the passage of the Sarbanes-Oxley Act in 2002.

Companies in this year’s group generated 2012 revenue of $50 million to $1.1 billion, where full-year compensation was reported. Data from proxy statements for 49 companies were included in the study. In the last report, which evaluated 2011 numbers for 58 companies, annual revenue had climbed by 6 percent and net income was flat. In 2012, median annual revenue and net income were both flat. Similarly, overall total compensation for CEOs, defined as base salary, annual cash incentives, and long-term incentives such as stock options and stock awards was, for the most part, fairly steady. The median total compensation for DFW midsize company CEOs in 2012 was $1,722,394, versus $1,844,302 in 2011.

Looking at 2012 versus 2011 compensation solely for those 45 CEOs where the same executive was in place, the average increase was 10.6 percent, but the median increase was zero, meaning that half the companies reported no increase for its top executive or that CEO pay declined. Major pay increases (greater than 50 percent) were limited to a select group of companies: Atrion, First Cash Financial Services, Matador Resources, and Nexstar Broadcasting.

What would merit more than a 50 percent pay increase for the CEO? Marsha Cameron, senior partner at Paradox Compensation Advisors, a Dallas-based consulting group, says many companies articulate a rationale for increases to CEO pay in their proxy statements. For instance, David Battat at Atrion assumed the role of CEO during 2011, and his 2012 compensation, including a stock award he had not previously received, more fully reflects his increasing responsibility.  Rick Wessel at First Cash Financial Services reaped the benefits of a structured bonus program that rewards improvements in earnings per share. This is on top of a richer stock award value, due in part to increases in the company’s stock value over the two years. Matador Resources implemented a new long-term incentive plan and provided major grants to Joseph Foran, though a significant portion of the value will be realized only if performance goals are met.

In other cases, the rationale is not clearly stated, but an astute shareholder can read between the lines. For example, Perry Sook at Nexstar received a mega-stock option grant, but this was the first grant awarded in several years. 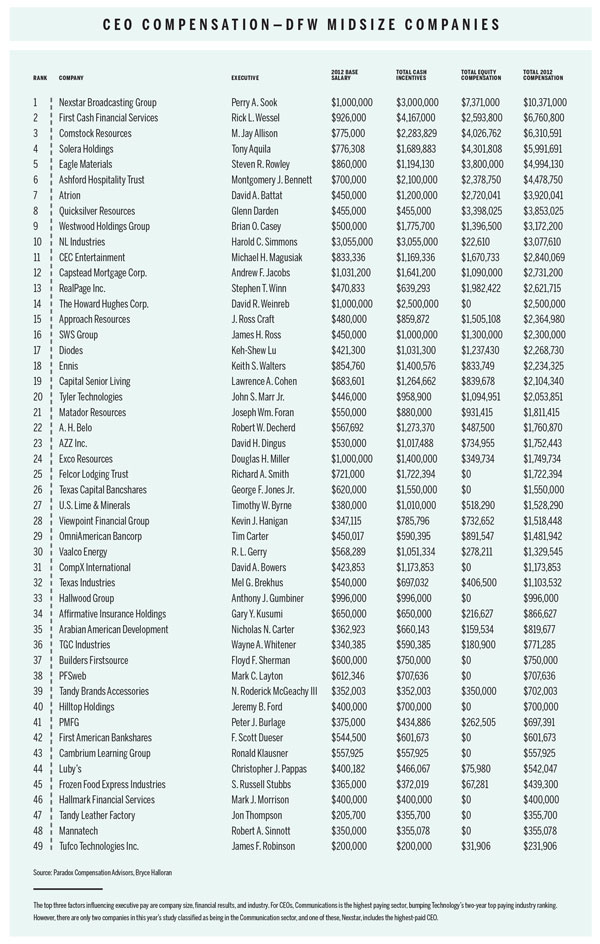 Where base salaries are concerned, the median for the full group was $540,000 versus a median of $515,000 in 2011 for the same group of companies. For the 45 companies where the same chief executive was in place in both 2011 and 2012, 20 companies increased base salary in 2012, while 23 maintained base salary at the same level, and two companies decreased base salary for the CEO. The highest base salary increases were awarded to Matador’s Joseph Foran ($310,000) and Comstock Resource’s Jay Allison ($205,000), though in 2012 these two companies reported major decreases in net income.

Typically, annual incentives constitute a larger proportion of CEO compensation in midsize companies than in large public companies, where long-term incentives greatly outweigh the value of annual bonuses. This year’s median annual bonus award for midsize companies was $336,000, including eight companies that awarded no bonus, versus $425,000 for this same group in 2011. Decreases in bonuses occurred in 12 companies where the same incumbent was in place in both 2011 and 2012. Paradox reports that although one of the most common bonus objectives is some form of profitability metric, net income alone does not necessarily predict bonus awards. Five companies with positive net income decreased bonus levels, and 14 companies with negative net income paid a bonus for 2012 performance. Strong financial performance typically is almost always rewarded, however. The highest bonus in the midsize group was paid to First Cash Financial Services’ CEO. This company, new to our study this year, demonstrated net income performance in the top 10 percent.

SHAREHOLDER PRESSURES
During the past several years, shareholder pressure regarding executive pay has clearly influenced the way that companies handle the determination of CEO pay. In the area of bonuses, companies increasingly use more formulaic, versus discretionary, approaches. As noted in prior studies, however, there has been a trickle-down effect—i.e., middle market and smaller public companies tend to lag the trends in larger companies.

For 2012, 14 of the 41 companies (34 percent) that paid bonuses determined awards all or mostly on a discretionary basis, though these decisions were usually guided by objective factors. This compares to 49 percent of companies in last year’s study, which used a discretionary approach. In combined base salary and annual bonuses, DFW midsize companies paid their CEOs a median $996,000 in total cash compensation in 2012, versus $953,259 in 2011. “It’s important to look at the companies where the same CEO was in place during the past two years, though,” Cameron says. “In those companies, total cash was absolutely flat or lower than last year in half of the companies.”

This year’s study follows a stellar year for CEO increases among DFW midsize companies, largely due to the fact that long-term equity awards (stock options and various types of stock awards) increased dramatically from 2010 to 2011. Sixty-six percent of the companies in last year’s study made awards that added up to $58.4 million in value for their CEOs. For midsize companies, 2011 values do not necessarily constitute a new trend, Cameron says. “Whereas larger companies are likely to have consistent annual grant practices, midsize public companies are less prone to award large equity grants every year,” she says. “That’s why we frequently look at three-year average award values when advising these companies on competitive trends and equity award size.”

In 2012, nearly 70 percent of the companies made a long-term award, but the median value was $350,000 versus $785,970 in 2011. Midsize companies across North Texas do not appear to increase or even maintain past award values for their CEOs, Cameron says. In spite of a lower median grant value—and a somewhat smaller number of midsize companies in the group analyzed in 2012—$46 million in total value was awarded to CEOs. Thirteen companies awarded 77 percent of the value, however, and 14 companies made no awards. Cameron expects to continue to see wide variation in long-term incentive practices among midsize companies in the DFW area.

THE RISE OF THE CFO
The scope of the chief financial officer’s responsibilities, especially at public companies, encompasses a variety of complex functions: accounting, financial reporting, audit, risk management/governance, budgets, treasury, and, often, information technology, human resources, and facilities. The CFO typically serves as a lead on mergers, acquisitions, and other business transactions. In short, the CFO carries a critical, heavy load within most companies, and turnover in the role is high-risk. Sarbanes-Oxley dictates responsibility, and liability, for financial reporting that is equal to the CEO’s accountability in that arena.

Accordingly, for the 41 companies where full-year compensation for the CFO is reported, the chart at left lists the incumbent and pay levels from the most recent proxy statement. Median base salary is $314,535, but varies from $156,333 for Michael Owens at U.S. Lime to $962,000 for Greg Swalwell at NL Industries. Eighty-nine percent of CFOs received a cash bonus with a median payout of $144,523. The top bonus-earner was Doug Orr at First Cash Financial Services, which generated $81 million in net income for its shareholders. Seventy-one percent of CFOs received a long-term incentive award, versus 66 percent of CEOs, and the median value of equity compensation was $185, 032. 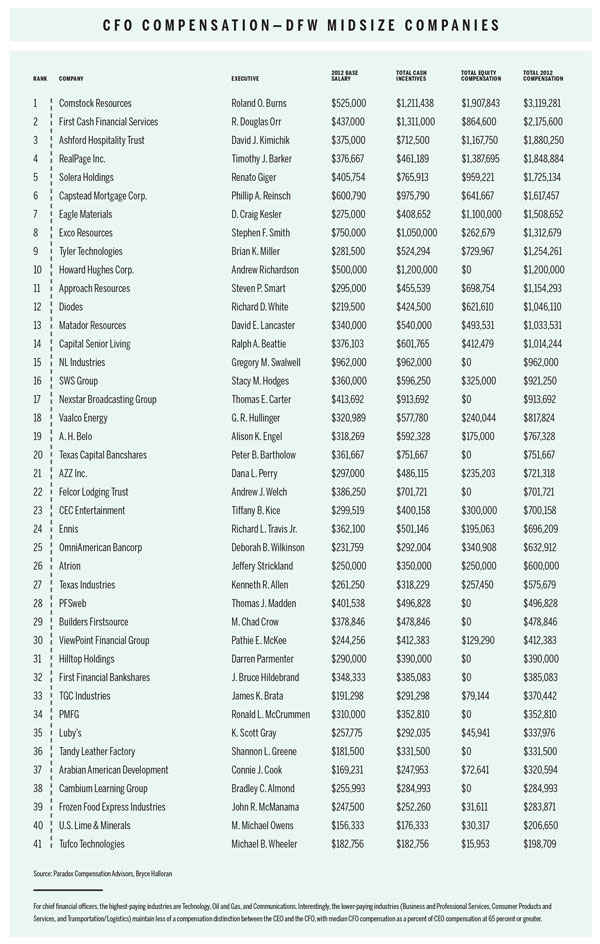 If chief financial officers are being increasingly recognized for their significance in a company’s success, shouldn’t CFO compensation accelerate as well? One way of examining this question is to analyze the relationship between CEO and CFO pay increases over time. Paradox reviewed the CEOs in the study who had the same job in 2008 (31 companies) and found that at the median, total reported compensation for the group had risen by 13 percent ($235,492) over four years (2008 through 2012). During the same timeframe, for CFOs in the same job (23 companies), the change in median total compensation increased by 28 percent ($146,046).

So, in some small measure, the growing importance of the CFO is being recognized, with compensation increases that were about 1.9 percent higher per year than those for chief executives. On the other hand, the CEO’s significant pay superiority is unlikely to change much.