In the 1980s, the leveraged buyout firm Hicks & Haas, formed by Tom Hicks and Robert B. “Bobby” Haas, was a remarkable Dallas success story. Among its biggest coups: turning $88 million of investors’ money for the acquisition of several soft drink makers into $1.3 billion. After Hicks & Haas was dissolved in 1989, Haas continued to be involved in the buyout world but also found himself drawn increasingly to Africa. There he found prominence as a photographer, documenting “the life and death drama that unfolds in the theater of the African wilderness.” In a new book titled Masters of their Universe: Business (and Life) Secrets Taught by Four-Legged Professors (Langdon Street Press, $24.95), Haas argues that risk-taking businesspeople have much in common with—and much to learn from—the creatures he studied in the wild. In the following edited final chapter from the book, called “When the Boat Comes Back,” Haas illustrates his maxim: “The most underrated part of the investment business is selling.” The excerpt that follows also brings to bear each of 10 business “secrets” Haas has explained in the book thus far.

The sale of our interests in the Dr Pepper/7-Up Cos. was no ordinary deal. It was the pinnacle of our investment firm’s track record up to that time, and a high-wire act that unfolded in a three-ringed circus of Wall Street haggling. Our firm’s role was not only to serve as the master of ceremonies in coordinating the multiple sets of negotiations, but also as the lion tamer that kept the financial predators away from each other’s throats.

To set the stage with the dramatis personae in this true-life adventure, our Dallas investment firm Hicks & Haas led the acquisition of Dr Pepper Co. in August 1986 with financial backing from Lehman Brothers and consumer giant Cadbury-Schweppes. Just a few months later, after both Lehman and Cadbury declined to finance our efforts to buy The 7-Up Co. from cigarette kingpin Philip Morris, H&H scrambled to secure the needed financing for the 7-Up buyout from Wall Street potentates Donaldson Lufkin Jenrette and Citicorp Venture Capital. Forced by the unwillingness of Lehman and Cadbury to participate in the 7-Up deal, we separated Dr Pepper and 7-Up into two different ownership structures and cobbled together an agreement between the two that allowed a single team of senior managers to direct the operations of both companies without running afoul of the antitrust rules that might otherwise prohibit such conduct.

And we were off to the races. In the year after the acquisitions, Dr Pepper continued to rack up impressive growth in earnings, while 7-Up engineered a dramatic turnaround from the humdrum performance of its years as a neglected stepchild of Philip Morris. By the end of 1987 (our first full year of ownership), Dr Pepper and 7-Up had compiled a torrid pace of combined growth, earning a total of $111 million in operating profits compared to just $58 million in the prior year.

Before our bubble had a chance to burst, we placed a figurative “For Sale” sign on the front lawn of the headquarters of our soft drink group and welcomed all bidders to come forth with their best offers. In the privacy of our own inner sanctum, we were hoping for a total price of around $1 billion for the two pieces of merchandise combined, which would have netted a tidy profit of close to $350 million to be split among our firm and its co-investors in Dr Pepper and 7-Up in the span of only about 18 months of ownership. At a price of $1 billion, it would have been a “tape-measure home run” in the jargon of Wall Street.

But rather than wait for bids to come over the transom through our investment bankers, H&H decided to reach out to a close friend and colleague who had just launched a new private-equity fund with backing from Prudential Insurance. Unencumbered by the Gordian knots that often entangle such complex transactions, we met privately on several occasions—in such nondescript settings as an all-night hamburger joint in midtown Manhattan—in an effort to hash out a bargain that worked for both sides. And lo and behold, we did just that in a fraction of the time that our investment bankers had slated for the sale process.

What emerged from those private negotiations was an eye-popping deal for the shareholders of Dr Pepper and 7-Up. We were to receive $1.3 billion for our collective investments (a gain of almost $650 million compared to the $350 million we had targeted) and, furthermore, we would be able to leave a portion of our gain invested in the two companies in exchange for continuing to hold a controlling interest in the newly named and unified Dr Pepper/7-Up Cos.

To avoid a Byzantine labyrinth of state insurance regulations, Prudential was required to own less than 50 percent of the combined enterprise, so it needed a knowledgeable and trustworthy partner that would be willing to invest capital for a 51 percent ownership stake. H&H and our investment cohorts in the Dr Pepper and 7-Up deals filled the bill just fine as a ready and willing set of partners, and thus we had the chance to realize a huge gain, maintain controlling interest, and saddle up for another ride. 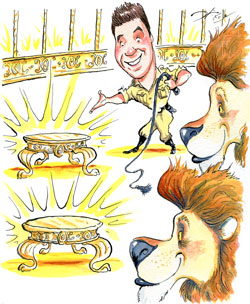 The deal with Prudential had come together with such warp speed that we had not yet had a chance to pound out an agreement between the major institutional shareholders of Dr Pepper (Lehman and Cadbury) and their counterparts on the 7-Up side (DLJ and Citicorp) as to how we would split the proceeds of the sale, in the event of a single deal for both companies rather than two separate deals.

Since our firm H&H owned almost exactly the same percentage interest in each company, we were indifferent to the split. Therefore we were in a unique position to act as an “honest broker” in the ensuing negotiations as to how we would carve up the overstuffed turkey that had arrived on our doorstep well before the scheduled date for Thanksgiving.

There is only one scene on Wall Street more gruesome than witnessing a band of institutions hurling blame on each other for a deal that has gone sour—and that is being in the midst of the feeding frenzy that ensues when financial giants are called upon to decide how to divvy up an unexpectedly large gain.

With the Prudential offer hanging in the balance as both a dangling carrot that should have promoted cooperation among the parties and a piñata to be pounded by the club carriers of Wall Street, the action shifted to the sellers’ side of the table and our efforts to stitch together a deal between the Dr Pepper and 7-Up shareholders on the overall split of the proceeds. This fraternal rivalry pitted Lehman and Cadbury on the Dr Pepper side versus DLJ and Citicorp on the 7-Up side, with our firm squarely in the middle wearing the black- and-white stripes of the impartial referee.

It soon became apparent that we might just as well have been wearing the black-and-white stripes of a zebra in the midst of a clan of frenzied hyenas.

A short series of conference calls among the parties left little doubt that we were not headed anywhere near consensus, so we all thought it best for our firm to assume the role of shuttle diplomat à la Henry Kissinger. With Kissinger as our role model, we implemented each of the secrets in our dog-eared manual on the art of negotiation.

SECRET NO. 1:
Know the limits of your own territory—perhaps the world is flat after all.

The first decision was designating the site for our face-to-face negotiations. We chose Dallas, inviting each of the parties to our offices as neutral turf that favored neither the Dr Pepper nor the 7-Up side. In addition to extracting the opposing parties from the tension and peer pressure that ooze out of the sidewalks of New York, the Texas site put H&H on our home territory. In the more hospitable atmosphere that pervades Dallas, we felt we could exert greater control over the ensuing discussions than if we were gridlocked in the snarling pace of Gotham.

Besides the comfort of being on our home turf, staging the negotiations in Dallas reinforced the impression that the U.S. soft drink sector was one where our firm was more steeped in experience than any of the other financial participants. As the site of the headquarters for both Dr Pepper and 7-Up (as well as the Dr Pepper Bottling Group of Texas, another of our holdings), we would be meeting at the epicenter of a cluster of our portfolio companies that represented the third-largest soft drink group in the country. In the intense negotiations that were about to unfold, we had set ourselves up as the gracious hosts, but also as the firm that was most familiar with the territory we were about to explore in search of common ground.