Yosi Samra’s journey to running a top fashion brand began in the dimly lit bars of New York City, where he worked as a promoter and played the drums in a punk rock band. As the bars closed down each night, Samra watched girls clutch their high heels and limp toward the door on sore, bare feet. He thought about the need for travel-friendly women’s shoes, and the market that would surely exist.

That was 2004. Fast forward to 2013. Samra’s fold-up ballet slipper is now one of Hollywood’s most famous shoes. Google his name, and Samra’s own image is buried under hundreds of paparazzi photos of celebrities sporting his footwear. Sarah Jessica Parker, Kourtney Kardashian, and Anne Hathaway are just a few.

The Yosi Samra line, which has expanded to include handbags, sandals, and children’s slippers, is sold in about 1,000 stores domestically, including Nordstrom and Bloomingdale’s, and in 85 countries internationally, including Israel, Samra’s family’s native country. “I never imagined it would take off the way it did,” he says.

But the shoes business was always in his blood. His father, a shoe industry veteran, produced a line of women’s special occasion footwear, J. Loren. Samra grew up behind the scenes of the business in the New York stockrooms. “I ran his warehouse when I was 16 years old,” Samra says. “It was the best schooling I could have, just being involved with and learning every aspect of the business.”

When Samra brought his father his new idea, the two put their heads together and made a trip to their factory in China. The goal was to create a shoe that was easy to carry. A shoe’s traditional single sole prevented it from becoming compact, so they split the sole into two, enabling it to fold in half. They released the flat in a palette of four colors under the J. Loren brand, but between Samra’s work for his father and his nightlife promotion company, Samra’s innovation was relegated to the backburner.

By 2008, Samra was ready to try again. He decided to branch off and launch the Yosi Samra brand on his own in 2009, with his fold-up ballet flat as the star. He used social networks and let consumers test his products and do his marketing for him. For two years, yosisamra.com was the only place to purchase the product. Then, in October 2009, the shoes were featured in People Style Watch, People magazine’s fashion publication. Everything blew up. Sales tripled, and celebrity sightings drove even more demand. 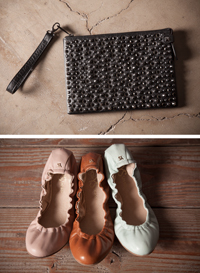 Along with its signature ballet flats (above), the Yosi Samra line has expanded to include handbags, sandals, and children’s slippers. Photography by Nick Prendergast
Photography by Nick Prendergast
Samra’s shoes hit stores in early 2010. “My idea was not to sell to shoe stores, but to target boutiques and make this an accessory,” he says.He kept the packaging small. Stores that avoided carrying shoes due to their space-hogging boxes appreciated the compact slippers that came in small drawstring bags. As of spring 2014, Samra’s shoes will sport a small YS logo on the heel to stand out from imitation brands. But the pricing has stayed the same—under $100.

As a follow up to the November 2012 debut of the children’s line, which he says “took off on its own overnight” and will soon be sold at Neiman Marcus, Samra is launching additional styles of women’s shoes, including boots, and a men’s collection in 2014.

He runs two offices with more than 30 employees in New York, but lives in Dallas, moving here earlier this year to be near his girlfriend, because he was seeking a change of pace, and because Dallas is one of his fastest-growing markets. He has a showroom in the Fashion Industry Gallery in downtown Dallas and is planning to relocate his company’s headquarters here, too.

When he’s not traveling, Samra is settling into his new home in Preston Hollow, letting his dog, Dexter, enjoy a backyard, and playing his drums, which are assembled upstairs. It’s a long way away from the clubs of New York City.