Talk about fish out of water. There they were: two young, attractive, well-dressed women from New York—each with their palms pressed hard against their ears—in a full, albeit wobbly, retreat from the North Texas pistol range.

One was blonde; the other, brunette. Each threatened to break a fashionable high heel while zigzagging her way away from the range and across the parking lot to the clubhouse, where I was looking out the window with the gun-range manager.

“I believe I have spotted the advance team sent by the CEO,” I said to the affable manager, who was also amused.

We were in the clubhouse at Fort Worth’s Alpine Shooting Range, not only to escape the piercing staccato firing from the pistol and rifle ranges, but also to get a better look at the “lockdown” drills being performed by 20 or so prison guards outside another window.

The breathless New Yorkers surged through the club entrance like Duke Wayne bursting through saloon swinging doors. Panting and pointing, they tried to explain their hasty trek through the parking lot, attempting to escape the deafening sound of roaring gunfire.

That’s when they spotted the baton-lunging prison guards.

Their wide eyes and open mouths told the story. They believed they had joined Alice down some off-beam rabbit hole, landing in a Neanderthal kingdom where absolutely nothing would ever make sense to them again. I wanted to console them, perhaps assure them that probably some of us out here in the Wild West even recycled. But frankly, I was enjoying the moment too much.

I’m a hunting guide who travels every step of the way with my often well-heeled clients. Sometimes we go to Kansas for pheasant, Bolivia for dove, or Costa Rica for sailfish. But more often these last 26 years, we hunt and fish here in the great state of Texas. I pride myself on the ability to produce whatever a client desires and can afford.

The young Swedish executive with a $375,000 shotgun wants to hunt pigs from a helicopter in the morning and alligators in the afternoon? No problem. It’s off to the Wing Spread Hunting Lodge & Social Club in El Campo, where 46 hogs were downed in just about two hours.

The Dallas contractor who wants to hunt driven birds in the morning and Kudu in the afternoon in Zimbabwe? No problem. Came back with a Safari Club International trophy to boot.

So, when a New York-based financial-management company asked me to put together a shooting event for its “top 100 producers,” I quoted my modest fee and Texanized the affair as best I could. That is, I relied on the incredible owner/chef at The Grape, my own guides and scouts, and the professional staff at Alpine. I’m often asked which kinds of guys—and men are 95 percent of my business—are the most difficult to work with.

Lawyers? Actually, no. One of my favorite dove-hunting groups consists of attorneys and their clients from an esteemed firm in Houston. They at least pretend to take the advice and instruction I give them, and regularly produce limits of birds.

“How about surgeons?” you say. Nope, though they can be stubborn and full of second-guessing if a plan doesn’t play out perfectly. But two of the men who provide my most enthusiastic testimonials are brain surgeons. 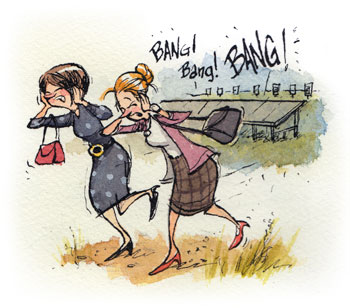 For the most part, all of my clients are top-shelf great sportsmen and classy gentlemen. But I must say that if an instance of pejorative behavior arises, it can be traced most often to a CEO.

As they like to tell you, “I like to think out of the box.” As I often reply, “My goodness, how original!”

Which brings us back to the New York “top producers.” Sending an advance team of non-native-Texan-born ladies—who reside in New York City—to look over our planned shooting operation would be like me sending a bird boy to Wall Street to debate tactical asset allocation.

Like I said, there were to be about 100 of them. What I didn’t mention is that all of them were to shoot both shotguns and pistols before departing by bus to Billy Bob’s in Fort Worth for dinner and a show. So now add a prohibitive deadline to the equation.

Oh, and one other thing: most of them were Yankees. And some, I now feel certain, had never been off concrete. The company CEO was adamant that all would shoot. I was going to make that happen in the safest and most comfortable environment possible. We had one instructor/overseer for about every four shooters, plus safety glasses and ear protection for all.

Therefore I was surprised when, just after the buses arrived, two uniformed paramedics sought me out, pointed to their shiny orange and white ambulance and asked, “So what are we supposed to do?”

I thought over this question and asked in return. “Are you trying to tell me that one of our morons, er, guests, has already suffered some kind of accident?”

The ambulance driver told me, no, that he suspected they’d been hired “just in case.” I knew instantly that my fee had been set much too low. We went on with the safety demonstrations, however, chaperoned each group to their shooting stands, and all had a rousing good time.

Though some drew back to the clubhouse after one pull of the shotgun trigger.

Big Man Gets His Limit
What makes the CEO so hard to deal with at times is like what I imagine being married to a man must entail. The chief executive wishes to be in charge of every aspect of every endeavor. But we all know there are certain times he is not the best qualified to evaluate or conduct a next step.

I remember hunting a dove patch years ago that consisted of nothing but sheep, dust, sunflowers and, oh, yes, hundreds of milling dove. The head honcho for the group was an enormous man—close to 400 pounds—who could not stand for long periods or fit onto a standard hunting stool.

We somehow secured what appeared to be a piano bench for the Big Man. But by the time he got comfortable, the birds were slowing way down and most everybody else in the field had shot their limits. Big Man was not gonna budge until he secured his own limit, though, and all of us could tell this would take much time—time we did not have.

If you intend to use a field more than once on a dove trip, you must let some birds light in the pasture. With most everyone else now drinking beer at the trucks, my last shooter was short a half dozen or so dove, and about to screw up this sheep meadow big time. I gave Big Man a box of shells that I told him were “loud, but long-shooting high brass,” along with some impact-shooting earmuffs that would mute the noise.