He’s now the fourth-generation CEO of Olmsted-Kirk Paper, a 108-year-old, family-owned company that sells and distributes fine paper and industrial paper and other related supplies. But earlier in his career John R. Taylor III was an investment banker in New York, working for a bank that eventually became part of JPMorgan Chase. Then he moved to Los Angeles and became a writer, turning out screenplays by hand on long yellow legal pads. “I was a more successful banker than I was a writer,” Taylor says. “But I sure enjoyed the life.”

These days the versatile Taylor, clad in a dark suit and tie, is comfortable sitting in the conference room at Olmsted-Kirk’s recently renovated, 192,000-square-foot headquarters office in Farmers Branch.

Like the rest of the space, it’s almost, but not quite, finished. Portraits of his great-grandfather, grandfather, and uncle are propped up against the wall behind Taylor, waiting to be hung. Wander the halls and you’ll see workmen installing beautiful stained-glass windows—which were brought from the company’s former office in the Dallas Medical District—opposite the reception desk. Furniture sits plastic-wrapped in the warehouse. But the century-old Olmsted-Kirk shields are already installed outside, posted like double guards on a brick wall near one of the entrances.

As the portraits and shields indicate, Olmsted-Kirk is a true family-run business, “where everyone works together to guide the company into the future,” Taylor says.

Several of his other family members are actively involved in the company’s daily operations, and those that aren’t working day-to-day serve as members of the board of directors.

Taylor himself holds an undergraduate degree in English and literature and an MBA. His mother was an Olmsted, a descendant of Harry Olmsted, who started the company in 1905 with Myron Kirk. 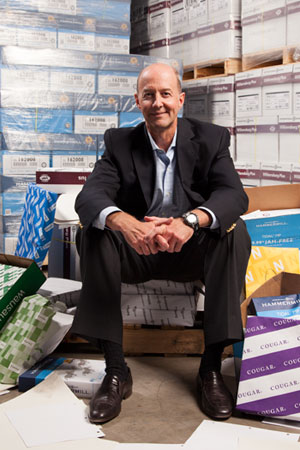 Taylor says he had a “baptism by fire” when he joined the company in 2009.
Taylor’s great-grandfather ran the company as did his grandfather, who passed away in 1992. Taylor’s uncle—his mother’s brother—then took the reins until his death in 2007, and Taylor took over two years later. “There was so much going on,” Taylor says. “It was baptism by fire.”

No wonder. It’s been a challenging time for the paper industry. Paper sales have been on a very slight decline since the early 2000s, Taylor says. In 2008, the slight decline became a significant one. “There was a big shift at that point,” he says.

To compensate many paper mills contracted, and some major printers the family had done business with for years closed. As companies slashed their marketing budgets, the paper industry took a hit. Fortunately, Olmsted-Kirk was better positioned because it had diversified years earlier to include industrial cleaning supplies and equipment that’s sold to hospitals, office buildings, and contract cleaners.

Today a retail store planned for the Farmers Branch headquarters, which accommodates about 140 of the company’s 250 statewide employees, will be the first of its 13 Texas retail stores to showcase the industrial products. The company also has five warehouses around the state, from El Paso to Longview.

The next steps, Taylor says, include a push for still more diversification as the company expands into packaging. Over the next couple of years it may also consider acquiring another business. Although Olmsted-Kirk is privately held and doesn’t disclose financial numbers, Taylor says the company has seen a recovery from the recession, thanks to the state’s strong economy.

Despite the rise of email and internet marketing and the print media’s well-known challenges, Taylor says the company’s core product remains, and will remain, fine paper.

“It’s never going to be what it once was. But I think there’s a way that technology and print and the electronic medium of print can come together and do some really interesting things,” he says. “But it’s an industry that’s undergoing a lot of changes. So it’s a dynamic time for us.”