I don’t keep a precise count, but I estimate that Perry Sook says “local” about 437 times during our hour-long conversation at the Café on the Green at the Four Seasons in Las Colinas. The word is echoing in my ears for hours after we finish. I can only imagine, then, how often it must rattle around his own brain, like a mantra.

We meet at 7:30 a.m., with the sky outside still dark and relatively few tables occupied in the hotel’s spacious restaurant. Sook has just returned from eight days on the road, on business in California and Arizona. He’s been putting the finishing touches on an acquisition that’ll bring Nexstar Broadcasting’s holdings up to 68 television stations in 39 markets. (The $285 million deal has since been wrapped up.)

The Irving-based company is a big player in the country’s medium-sized markets—places like Salt Lake City, Utah; Shreveport, La.; and Terre Haute, Ind. When Sook started Nexstar by buying a station in Scranton, Penn., in 1996, it was with an eye toward taking advantage of the fragmented ownership and weaker direct competition in cities like these.

“I like large markets, but I think the opportunities to buy TV stations at reasonable prices are in the medium-sized markets. And, by the way, the money is just as green in Wichita Falls, Texas, as it is in Dallas.”

The service at the Four Seasons is friendly and attentive. I get the French toast, which the menu states is topped by carmelized bananas and roasted pecan compote, plus a glass of orange juice. Sook asks for a cup of coffee, two dry scrambled eggs, and a couple pieces of bacon. He specifically requests that no potatoes or bread be brought with his plate.

“I’m a big believer in protein and no carbs, particularly in the morning,” he says. “I have an affinity for bacon that is maybe not healthy, but it sure tastes good.”

I ask him if 2012, being the year of a national election, meant business was good for his stations. Even-numbered years, in which local, state, or national contests are under way, are generally stronger for TV revenue because of spending on political advertising, which Sook says can constitute as much as 15 percent of a station’s ad revenue for the year.

“The good thing about politicians is that they pay cash in advance, so it’s a good cash-flowing business for us,” he says.

So, I half-jokingly speculate, I don’t suppose he’s one to rail against the Supreme Court’s Citizens United decision, which allowed a host of new organizations to spend unlimited amounts of cash on the 2012 campaign. I don’t suppose Sook is personally all that interested in seeing less money in politics?

He takes a beat before delivering, with a knowing smile, what seems a well-worn response: “We encourage a healthy debate of the issues and prefer that they buy airtime to express their point of view, yes.”

But it’s through the business of producing local content and helping local businesses to sell their own local products and local services that Sook is convinced local television stations—and Nexstar’s in particular—will continue to thrive.

“We also view television as being the last, or only, true ‘reach’ media—where you can reach thousands or millions of people simultaneously. There’s really no other media with that kind of penetration,” he says. “We have made our bet that television is at the top of the food chain in terms of local content and local businesses using it as a medium.”

Sook believes that it’s the local content—rather than the content provided by a station’s affiliated network, or a syndicator—that’s the key to his stations’ success. Station managers at Nexstar are given the flexibility to preempt national programming if they’ve got a local production of more local interest to their viewers.

“If we tried to run 39 markets by remote control from an office tower in Dallas, we’d be a colossal failure,” he says.

Our food arrives, and Sook notices the stunning dish that’s been placed before me. “That looks outstanding,” he says. 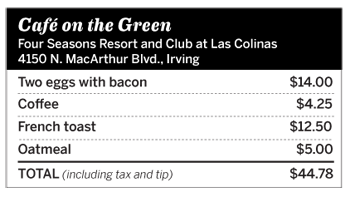 The French toast, with its pile of banana and pecan-flavored goodness on top, is such a delectable sight that I am moved to snap a photo of it with my phone before digging in. I’m even more pleasantly surprised after I do. The compote has a slight spicy kick that makes this far from ordinary French toast.

Sook goes on to tell me about how he got into the business, moving from work on the content production side of radio to sales in television to management and eventually ownership.

“I think what I do best is find good opportunities, negotiate good deals, then hire good people to run them, and get out of the way,” he says. “What makes a good station great is that attention to detail and making a hundred decisions every week and making more right than wrong.”

That and, I’m sure, keeping it local.