Dallas entrepreneur Tomima Edmark never liked shopping for intimate apparel, and has come to find that few people do, she says. Edmark’s lingerie site, HerRoom.com, stocks 170,000 items, from $9 granny panties to embroidered French bras that sell for more than $170. It also features innovative functions to help shoppers determine which bra brands and styles are likely to fit best.

The thriving e-tailer and its sibling, HisRoom.com, should rake in about $50 million in sales this year, Edmark projects. Most of that is from bras—those must-have foundations whose U.S. sales hit $6.4 billion for the year ended in February, according to NPD Group.

Despite those numbers, bras are not easy to shop for, especially online. Ever since Oprah’s “bra revolution” in 2005, women have become accustomed to hearing that they are probably wearing the wrong size and should be fitted by an “expert.” Contradictory advice abounds on what constitutes good fit. Edmark, who launched HerRoom.com in March 2000, says she had applications in mind that would make it a better experience than going into a store.

The first, “See It Under,” shows photographs of what every bra looks like under five different necklines, the better to see which bits will show.

The second. which took five years to develop, debuted last summer. It’s a five-minute questionnaire about breast shape, spacing, position, and size that crunches variables to recommend specific brands and styles. Visitors who complete the “Know Your Breast Bra Finder” survey are twice as likely to buy rather than just surf, Edmark notes. The Bra Finder also demystifies size discrepancies among brands by ascribing trademarked “universal cup” sizes. A customer identified as D3, for instance, can search for that size instead of having to know she would wear 34DDD in Natori, 34E in Fantasie, and 34F in Chantelle. Edmark expects to augment the Bra Finder by September with hundreds of photos of volunteer women in bras that fit and don’t fit to help educate shoppers. 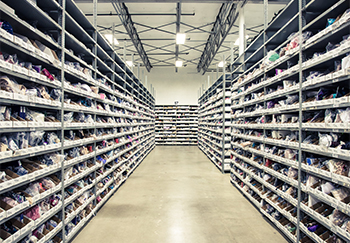 Edmark’s warehouse stocks thousands of items producing a projected $50 million in annual revenue. Photography by Shane Kislack
Photography by Shane Kislack
Being entrepreneurial comes naturally to Edmark, who made a fortune in the 1990s with the Topsy Tail hair-styling tool, a skinny piece of plastic with a loop that she says reaped more than $150 million in sales. A cash-poor MBA student when she invented it, Edmark raised $5,000 to produce the injection mold by writing a book on kissing. She patented the Topsy Tail, which she later sold, and has filed for rights to innovations on HerRoom.

Not everything she’s done has been a smash success. Products called the Bowrette and the Halo Hat sold modestly. A “kiss-enhancing” machine was a bust.

Then in 2000 she applied for a patent for multiple views of products sold online, and business method patent 8,078,498 was awarded in December 2011. “People think it’s so commonplace, but back then nobody was doing back views and side views, and I was the first,” she claims.

Innumerable e-tailers are potentially infringing on her patent, and Edmark and her attorney are weighing how to proceed, with licensing among the considerations.

It was the enormous success of Topsy Tail that spurred Edmark to try to make magic happen again. “People kind of made me feel like I was a one-hit wonder,” she recalls. “I wanted to prove I wasn’t. You always wonder, are you lucky, or are you talented?”