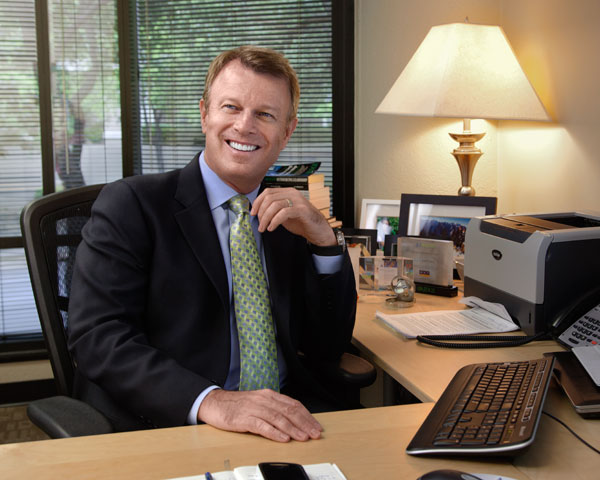 Alsbridge inc. could be called the 800-pound gorilla of its industry. “No single consulting firm does all that we do,” says the company’s founder, chairman, and CEO Ben Trowbridge.

Dallas-based Alsbridge provides a wide range of advisory services to companies across a broad spectrum of industries, catering to chief information officers, chief financial officers, and chief performance officers. It has averaged 45 percent growth a year for each of the past five years, with 100 percent growth in 2011 and 2012.

That success came on the heels of challenging times. When the economy began tanking in 2008, Alsbridge hit a rough patch, and Trowbridge was forced to put some austerity measures in place to cut costs. His company’s fortunes eventually took an upward turn in 2009 and stabilized in 2010. It was during that difficult period that Trowbridge experienced a priceless “ah-ha” moment.

“We were really struggling,” he says. “I was at an event, talking to Mort Meyerson, an investor in Alsbridge, and I was venting. He said to me, ‘It’s going to get worse before it gets better.’ That was good for me to hear. It reminded me that I needed to persevere and get through this and things would get better.” And they certainly have.
—Glenda Vosburgh

The decision to lead AdvoCare out of difficult times didn’t come easily for Richard Wright, who turned down three requests before accepting the job in 2007. He had served on the company’s trust committee for a number of years, and knew it would require a “significant amount of work” to change course. “I equate it to a cruise ship that was full steam ahead in the wrong direction,” he says. Dallas-based AdvoCare, which sells health and nutrition products directly to consumers through independent distributors, began to decline after the death of its founder, Charlie Ragus, in 2001. “I had to stop the ship, turn it around, and make sure it was headed in the proper direction. Then we were still only halfway there.”

The ship has since done a 180, and Wright expects to post revenue this year that’s 10 times higher than it was six years ago. The company’s U.S. distributors have increased tenfold, to 300,000.

Wright, who has had successful runs as a tech company owner and sales executive, planned to run for Congress before taking this job. He says he didn’t do it for the money.

“I wanted this to be fun, if we were going to do it,” he says, despite working 80- to 100-hour weeks for the first two years. “It’s amazing to be able to be a part of this. I’m very proud of this group of people.”
—Karen Nielsen

on the surface, electronic medical records are all about efficiency. But sometimes, the technology falls short. Doctors and nurses often have difficulty using the software for keeping digital medical records, ditch the programs, and go back to paper. It’s problems like this that Dallas-based Anthelio Healthcare Solutions Inc. solves, according to Rick Kneipper, whose titles at the 13-year-old technology services provider include co-founder and interim chief executive.

On one level, the company does for hospitals and physician practices what Ross Perot’s Electronic Data Systems Corp. did for corporate America: running their technology systems for them. But with Anthelio, it goes deeper than that.

For example, Anthelio personnel will go on rounds with doctors and nurses to discover how they take care of patients, Kneipper says. Then they might change the user interface of the records software to make it easier to use. Or they might show the caregivers ways to use the software so they can get things done quickly. “The people we must talk to are the clinicians,” Kneipper says. “We talk about the technology later.”

Anthelio generates more than $250 million in revenue annually, Kneipper says. It projects sales growth of 13 percent to 15 percent per year, with an ultimate objective of 20 percent annually.
—Jeff Bounds

Paula Marshall faced one of her biggest challenges shortly after stepping into the CEO role at Bama, a Tulsa, Okla.-based frozen baked goods maker. McDonald’s, which accounted for 99 percent of the business at the time, had placed the plant on probation for quality issues. Marshall admits she was focused on product diversification at the time and was caught by surprise. The company’s survival was in doubt.  “How fortunate am I to have a great customer like that,” she says. “Someone else would have dropped us and moved on.”

McDonald’s history with Bama dated back many years with Marshall’s father, who had run the company for decades after its 1927 start in her grandmother’s Dallas kitchen. She says she quickly learned the importance of quality control and instituted a rigorous training regimen for employees.

Since then, Marshall has successfully diversified into other product lines—and expanded into other countries. Her client list is a who’s who of restaurant and retail chains. Revenue has grown from $30 million a year in the 1990s to more than $350 million a year.

Marshall says she regularly asks her 2,500 employees what they think about company issues.

“I’m a real passionate people person,” she says. “Our mission is ‘People helping people be successful, with caring and accountability.’”
—Kerry Curry

Three years ago, BenefitMall diversified its product offering and moved into the growing trend of combining benefits and payroll services by acquiring a payroll company. President and CEO Bernard DiFiore orchestrated the deal to acquire CompuPay, doubling his company’s number of employees and increasing revenue by 60 percent.

Dallas-based BenefitMall works with more than 20,000 brokers and CPAs to provide a combined portfolio of employee benefit products and payroll services to small and medium-sized businesses. It processes more than 1 million payroll transactions a month and writes more than $1 billion in annual healthcare premiums.

On DiFiore’s watch, BenefitMall has made 13 acquisitions and experienced a more than 400 percent increase in its total number of clients and 1,700 percent total growth in revenue.

Upcoming changes in the federal healthcare law will present challenges for the company, DiFiore says, but also big opportunities. “The healthcare system, especially who pays for what, is being completely changed,” he says.

Those changes are expected to create new business for BenefitMall, as products will be required to help companies handle things like increased reporting requirements. That, in addition to the company’s combined benefit and payroll services, means BenefitMall is well-positioned to continue to increase its market share.
—Glenda Vosburgh

As an executive at Plano-based Electronic Data Systems Corp., Max Martin saw a need for software that could automate various chores that banks had to perform. He pitched the idea three times internally. And struck out.

So in 1980, Martin started ARGO Data Resource Corp. A third of a century later, the software company has nearly 500 employees, offices in Richardson and Memphis, Tenn., and a line of products that help banks and other financial services providers with everything from detecting fraud to managing cash at branches to streamlining staffing. The company also makes a line of software for the healthcare industry.

Martin learned the value of determination and hard work growing up on a farm in Illinois. Working in heat, cold, and all types of precipitation, he found he could withstand most anything.

That translated well to college, which he put himself through by raising hogs on his grandfather’s farm. But don’t mistake him for a country bumpkin: Martin double-majored in math and economics, and served five years on staff at the U.S. Air Force Academy.

Martin’s strong fiscal management means ARGO carries no debt and doesn’t have outside investors. The business has been profitable for its entire 33-year existence.
—Jeff Bounds