Roger Staubach has one of the most famous faces in Dallas. Thanks to his years quarterbacking the Cowboys to Super Bowl glory, he could easily command any room to come to attention. That’s just not his style. He’s so beloved in this city that many little old ladies would gladly offer their seats to him on a crowded DART bus. Yet Staubach hesitates before sitting at the table in front of the fireplace in the Park City Club dining room. There’s a “Reserved” sign on it, and he looks back at the hostess to confirm that it is indeed intended for us before he makes himself comfortable.

At 9 a.m., we’re too late for the breakfast buffet. Staff members are already putting away the dishes and breaking down the tables. When Staubach begins to talk, he speaks so softly I’m afraid my recorder won’t pick up his voice. I slide it a little closer.

He has arrived with something weighing on his mind. It’s a few weeks before the May municipal election, and his daughter, Jennifer Staubach Gates, is running for the Dallas City Council (an election she went on to handily win). The Dallas Morning News has just published a column that implies Staubach has transferred his own political aspirations onto his daughter. He’s not happy about it.

“My daughter’s a great gal, but this [campaign] is her,” he says. “My dream was never, never even indicated, never even tried, not ever any contemplation of going into politics.”

Staubach didn’t want to be Ronald Reagan, parlaying fame in an entertainment industry into political power. He wanted to be Henry S. Miller Jr., the man who hired him to work for his commercial real estate company while Staubach was still playing for the Cowboys. “He was a man of total integrity, a great person. The whole company—I just really enjoyed being there,” Staubach says. “Henry Miller Jr. was a lot like [legendary Cowboys Coach Tom] Landry. They both had similar haircuts … they both had phenomenal integrity, great work ethic, and they could transfer their strengths to other people.” 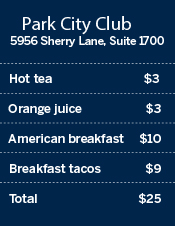 The waiter comes for our order, and I request the breakfast tacos with a side of fruit. They arrive beautifully grilled into a tight roll, more like burritos than tacos, with huge chunks of avocado inside. I’m immediately wondering how to get another invite to this private club, just to eat these again. Staubach asks for two eggs over easy with toast, bacon, and fruit. He orders hot tea and a glass of orange juice, too. When the bill comes later, it’s referred to simply as “American breakfast.”

It must be remembered that Staubach’s climb to becoming a powerful player in the country’s commercial real estate industry might never have happened if there had been Tony Romo-sized, $108-million contracts during his own NFL playing days.

“I couldn’t have retired at my age and just played golf. First of all, they didn’t pay quarterbacks what they do today. And I was 27 with three kids,” he says. “I kept thinking about [what would happen] if some linebacker takes off my head and I can’t play anymore.”

So Staubach set his sights on starting his own business after years with Miller. He found a niche in tenant representation, working for those seeking space rather than the landlords. That wasn’t a big segment of the industry when The Staubach Co. launched in 1982.

Decades later, the business had changed enough that clients began to ask for other services—facilities management, international opportunities—that Staubach Co. wasn’t always equipped to handle. That was the impetus for its 2008 merger with Jones Lang LaSalle, a larger company with a strong international presence. Five years on, Staubach says joining forces has proven a positive step.He’s now been in commercial real estate far longer than he played pro football. In which of these careers does he take greater pride?

“The feeling you have when winning a Super Bowl is fantastic, and the feeling I had when we accomplished having somebody else want to buy our company is still a great feeling,” he says. “They’re different feelings, but they’re similar in a lot of ways. But it’s a longer process over 30 years building The Staubach Co., and I just got lucky to come to the Dallas Cowboys.

“I was real fortunate. I always kid Archie Manning—we’re good friends—I could have been stuck with the Saints, you know?”