The running joke amongst my friends is that I can’t do a British accent to save my bloody life. The closest I can come is to yell, “ALLO GUVNAH!” in some cartoonish Texas twang meets Liverpool cockney mashup. God save the queen, indeed.

Happily, Uptown’s new British Beverage Company—located in the old Hully & Mo space at the Quadrangle—is just British enough to satisfy anglophiles without encouraging any frowned upon faux accents. Designed by local firm Plan B, the handsome interior feels like a modern take on the traditional pub. Sure, there are a few Union Jack-inspired clichés, complete with a London taxi and faux red phone booth out front. But tufted brown leather, exposed brick, and an airier-than-normal space make BBC a welcome lunch option for those craving some bangers and mash. 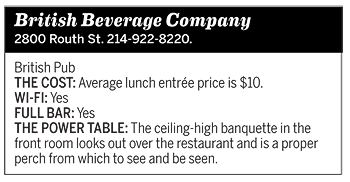 The BBC burger is brilliant simplicity. A thick patty, gorgonzola, and carmelized onions sit between a toasted croissant style bun. It’s so tasty, no condiments are necessary. BBC also offers three versions of fish and chips. The best of the bunch is the traditional beer-battered cod fillet served with salt and vinegar chips and the restaurant’s homemade tarter sauce. However, skip the brioche-crusted halibut version. The pan-seared fish tastes a bit bland and listless.

The best part of BBC may be its beer selection: 50 beers on tap and 100 different bottles. Sure, the days of the three-martini lunch may have gone the way of the Mad Men. But what’s the harm in the occasional stout, porter, or brown ale paired with a savory shepherd’s pie for lunch? After all, BBC is a pub. Go ahead. Indulge your inner Brit. Just leave the accent back across the pond, guvnah.