Joyce noticed he wasn’t able to recall dates and details, so she alerted the doctors. A CT scan revealed a brain bleed. Says Larry: “24/7, Joyce was my advocate.”

Lacerte received his first bone-marrow transplant in May 2010, from his older brother. Then, however, he relapsed. Baca helped organize bone-marrow transplant drives, which added more than 2,000 people to the registry. Baca says he knows of at least 10 matches in the last year and a half that resulted from those drives, saving half a dozen lives.

Doctors also tested Lacerte’s sister, who turned out to be an unexpected match. Although he’s been in remission since the second transplant, he isn’t out of the woods yet.

Last February he suffered from septic shock and nearly died. He’s also been hospitalized with pneumonia, and his immune system is compromised. That makes it difficult to walk around the neighborhood or spend much time outside the house or office, for fear (last year, at least) of the West Nile virus.

Through it all, however, Lacerte’s “survivor personality” shines through. Joyce says her husband has the attitude that, “ ‘If somebody is going to survive, then it might as well be me.’ When his doctor told him he sees him celebrating his 85th birthday, Larry said, ‘85? My dad lived to be 91.’ ”

David Michel, who’s been in a YPO forum group with Lacerte for years, says that even when the odds were “crazy long,” Larry never gave up.

“Looking back, it all makes sense to me now, because that’s also why he’s such a successful entrepreneur,” says Michel, who’s chief executive of Catapult Health, a health services company in Dallas.

Lacerte, for his part, says dying wasn’t an option. “It was easy for me,” he says, squeezing Joyce’s hand. “With Joyce, there’s an age difference. She’s nine years younger than me. I could not see leaving her alone for 30 years, although she’d probably be dating.”
Adds Joyce: “He knows I’d never do that.”

Travels with Larry
All throughout his illness, Lacerte has never stopped thinking about the business. After eight days in a coma from the septic shock, Lacerte woke up, told Joyce he loved her, and asked about the kids. Then he asked for his iPad to check in at the office.

“I love my work,” he says. “I love the people I work with and I love my clients.” 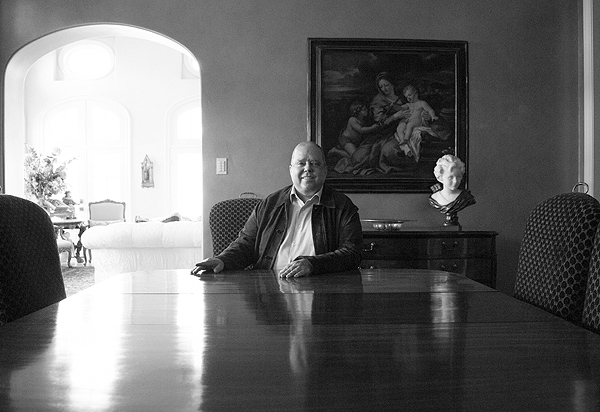 High-tech entrepreneur Larry Lacerte, photographed in his Highland Park home, says, “The harder I work, the luckier I get.” photography by Billy Surface
photography by Billy Surface
After selling Lacerte Software, with more than $200 million after taxes in his pocket, Lacerte considered taking some time off. He asked his wife and children how they felt about taking a six-month luxury cruise to the Panama and Suez canals. They quickly shot it down: The idea of spending all that time at sea with only their parents and no friends their age seemed crazy to them.

Instead, they bought a home in London and used it as a jumping-off place. Over the next decade they traveled across Europe and to South Africa, China, Japan, and South America. When they first arrived at their six-story British home, they brought only their clothes.

Lacerte is full of thoughtful expressions, including this one that he admits isn’t original, but is still a favorite: “God made people to love and things to use, and don’t get them backwards.”

No Shortcuts
Even so, Lacerte took only a few months off before starting three years of development on what would become ExponentHR. Most people expect that launching a company with millions of dollars in the bank would be easier than starting as a hungry entrepreneur. Not so,
Lacerte says.

“With my first company, every penny had to go to” running it, he says. “With the second company I had access to brilliant talent, funds, and a good reputation. I thought I was going to get there twice as fast, but there are no shortcuts. You have to build a foundation. I wasn’t looking for an exit strategy. I was looking for a business.”

About 10 percent of his employees from Lacerte Software now work at ExponentHR, partly due to nepotism and partly because it was a tightly knit group to begin with. Baca, Joyce, and Larry try to calculate how many family members work at the company, but it’s hard to pin down. There are at least four or five families and about a dozen extended family members. The rest of the employees were referred by each other.

Lacerte says he doesn’t want to be surrounded by people who agree with him. He wants to hear passionate opinions before making the final call. “Unlike American Airlines, I don’t ever want to have an adversarial position with my employees,” he bluntly says.

The family-like atmosphere also means that they argue like siblings, but ultimately do what dad (and mom) say, Baca jokes: “Although there are strong personalities, everybody understands that once the decision is made, that’s the direction we’re going to go.”

Adds Lacerte: “But if we find three weeks from now … we can change that decision fast. We don’t have to spend a year discussing it until everybody is happy. We can make the change because we’re nimble.”

To that point, Lacerte is passionate about not having “middle management” in his company. He also doesn’t have a secretary, preferring to use technology to do it faster himself. He has a policy of never hiring management from outside the company.

“I always promote from within,” he says. “It’s demoralizing to hire from outside, and it’s unrealistic [to hire] someone not in the trenches. At this company, managers are in the trenches. Programmers still program.”

Exceeding the Dreams
Lacerte is known as a straight shooter, donating his time to organizations he’s passionate about. He sits on boards for the Cox School of Business at Southern Methodist University, St. Mark’s School, and Universal Display Corp. (Nasdaq: PANL). In September he joined Dallas-based Blue Calypso’s board of advisors.

The family also is generous with its money to causes revolving around medicine, children, and education. In 1999 it donated $1 million to establish the Lacerte Family Children’s Zoo at the Dallas Zoo.

“Larry is not a person who tries to become famous,” says Dallas Mayor Mike Rawlings, who met Lacerte through YPO and bonded as Boston College supporters, as their kids both attended the school. “He’s a great guy who puts his family first and is quiet, thoughtful, and generous.”

Lacerte is an experienced Spades player, a voracious reader, and a history buff. The naturalized citizen loves American history so much that he named several of his children after presidents, including Madison, Monroe, and Quincy.

The family lived in that massive Preston Hollow home for 20 years, selling it in 2009 for about $29 million to Dallas billionaire Kelcy Warren. It was one of the top 10 most-expensive homes sold in Dallas that year.

The Lacertes bought their current Highland Park manse three years later, and today are building their “grandparent home,” which is just under 20,000 square feet on a 1-acre lot down the street. The dining room will have seating for more than 30 people to accommodate their large family—a big change from the couple’s first 3,000-square-foot home in California.

To say that life has exceeded their dreams is an understatement, Joyce says. Her husband agrees.

“There are a lot of people I know who work harder their whole lives than I have and without the success,” Lacerte says, summing things up. “It’s a combination of hard work, recognizing good ideas, luck—and timing. The harder I work, the luckier I get.”