It was 2011, and entrepreneur Cyndi Nickel was in search of a business incubator. Her Austin-based biotech firm DxUpClose, founded in 2009, was using lab space at Texas State University in San Marcos. It was time to get out from under the university’s wings, but Nickel needed easy access to a sophisticated laboratory.

Representing an early-stage venture still in the development phase of its product, she wasn’t ready to go out and build her own lab. In her search, Nickel heard about the North Texas Enterprise Center and met NTEC’s Hubert Zajicek, the center’s managing director-medical technology.

Zajicek encouraged Nickel to apply to present at MedVentures, a regional, early-stage investment conference focused on the rapidly growing medical technology sector. She did, and was accepted. Her presentation at the conference led to funding from angel investors. By March, Nickel had moved out of TSU’s lab and into NTEC’s operation in Frisco.

“NTEC has a great facility,” Nickel says. “The wet lab space is very nice. I needed a BSL 2 lab, a level that allows the handling of hazardous bacteria. They did the things they needed to do to turn the lab into a BSL 2. They put some investment into having us come to the incubator.”

NTEC also had some of the expensive electronic equipment required for DxUpClose’s R&D, plus a machine shop decked out with all the tools needed for making prototypes.

To top things off, Zajicek’s medical background gave DxUpClose access to expert advice it couldn’t get at other business accelerators. The company does antibiotic resistance testing. Its test is quick—just one hour to test for antibiotic resistance, compared to the standard test now that takes 12 to 48 hours.

And, since DxUpClose’s initial target market is urinary tract infections, Zajicek’s background in nephrology—the study of kidneys—made for a perfect fit.

Like many North Texas entrepreneurs, Nickel had discovered the unique talents of Zajicek, 42, a medical doctor-turned-business promoter with a knack for spotting the promise in fledgling companies. Those talents are more valuable than ever, as Dallas-Fort Worth continues it years-long quest to become a force to be reckoned with in the life-sciences space.

Medicine was in the family’s DNA. Zajicek’s grandfather and father both were doctors. His father worked as a hospitalist—a role now taking on increased emphasis in the U.S. Hospitalists, who are based within hospitals, focus on acutely ill patients rather than run their own medical practices.

Zajicek’s father, a cardiologist, specialized in treating complicated arrhythmias. But Peter Zajicek was a hybrid of sorts as he also had a separate private practice and made house calls. Hubert, as a youth, often accompanied him on those calls.

“It had a real neighborhood type of feel. When my dad was on vacation or gone, I’d get calls from his patients,” he recalls.

Zajicek says he always wanted to be a doctor, and assumed that someday he’d take over his father’s practice. To reach that goal, he attended medical school in Vienna, then accepted a post-doctorate fellowship at The University of Texas Southwestern Medical Center in Dallas.

Before all that, though, he fell in love with an American girl from Tyler, which was the key reason for his eventual immigration to the states.

At age 18, Zajicek participated in a summer Rotary International exchange program and became smitten with Beth McNally. With both parents’ blessings, they managed to see each other over summer and Christmas vacations, and Beth spent her junior year of college abroad in Vienna. In an against-all-odds story, the two carried on a long-distance relationship for about eight years before getting married.
They made a pact that whomever completed medical school first would go join the other in their country. Zajicek finished first.

The two married in 1995 and, after graduating from medical school in Vienna, Zajicek arrived at UTSW a year later to do his fellowship. 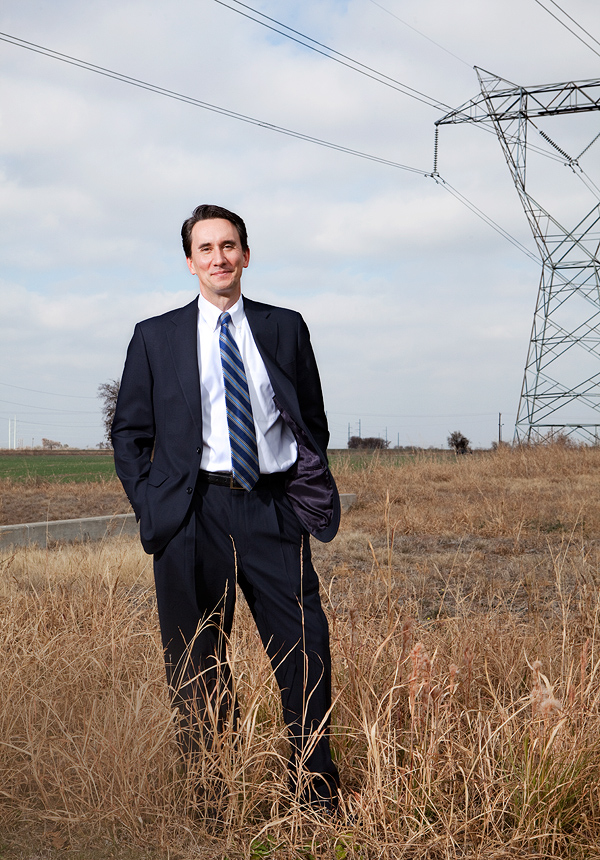 With a medical background and an MBA, Hubert Zajicek seems ideally suited to serve as managing director-medical technology at the North Texas Enterprise Center in Frisco. photography by Justin Clemons
photography by Justin Clemons
Change in Direction: Zajicek decided to specialize in nephrology, an interest he developed in medical school. Within a year at UTSW, he became a National Institutes of Health fellow, with his research and salary funded through an NIH grant. In 2002, he joined the medical school’s faculty.

After receiving his second grant, however, Zajicek began to look inward, thinking about his future career path. “I was looking back on my first five years. I had chosen a pure research path. … In essence it’s very unlikely you will see your actual research ever having an impact on patients,” he says. “It takes a very long time, and it may or may not happen.”

But as a physician, Zajicek wanted to see that impact. He wanted to find a way to get closer to patients. “I’ve always had an interest in commercializing things,” he says. “I always had that in me.”

Ultimately, Zajicek decided he needed a good business education with a “proper MBA.” So he enrolled in night classes at Southern Methodist University. He had no undergraduate degree in business. No accounting 101 experience. He hadn’t taken calculus since high school, some 10 years earlier.

He felt like every step was harder for him, but he loved every minute of it. About a year and a half into the program, he learned about NTEC—now one of about a dozen local business incubators—and signed on as a volunteer scientific adviser.

“It was an opportunity to see startups and explore that world,” he says.