Retiring doesn’t come easy for Timothy P. Taft. The first time he tried it, in 2007, after serving as the CEO of Pizza Inn, restlessness drove him back to the work force. After a second attempt in 2010, Taft finally settled into a routine at home with his wife, Jamie. He’d wake up, putter around the house, read books, and feed the chickens living in the “Hilton of all hen houses,” which he built himself.

A year later, Taft was shopping at an estate sale with his wife when his cell phone rang. “I got a call from a headhunter who said, ‘Look, I know you’re raising chickens. You’re a gentleman rancher now, but I’ve got something for you that has your name written all over it.’”

That “something” is Taft’s current gig—CEO of Addison-based Fiesta Restaurant Group, a fast-growing spinoff of Carrols Restaurant Group, a Syracuse, N.Y., company that owns nearly 600 Burger Kings. Fiesta’s two fast-casual franchises, Taco Cabana (a 24-hour Mexican joint with fajitas, nachos, and tacos) and Pollo Tropical (a Caribbean-inspired restaurant famous for its flame-grilled chicken), are both thriving. Fiesta increased its second-quarter revenue 9.4 percent to $140.9 million and opened 18 new restaurants this year, bringing the total to more than 300. It also leads the industry in terms of average per-unit volumes.

The success of the brands all comes down to convenience and service, Taft says. “When you walk into our restaurants, we don’t yell out your number at the counter; we bring your food to you. We take the tray away; we bus your table for you. We are focused on delivering good value for the money.”

Like Taco Cabana, Pollo Tropical has a serve-it-yourself salsa bar, which helps change the taste profile for every single meal. Its locations are concentrated in southeastern states, but that will change in the first quarter of 2014, when Pollo Tropical begins expanding westward. At the same time, Taco Cabana will open its first out-of-Texas locations in the east.

Known for its bone-in, Caribbean-style marinated chicken, Pollo Tropical’s first Texas venue will open next spring at Belt Line Road and Montfort Drive. After Fiesta Restaurant Group relocated its corporate headquarters to North Texas from Miami in late 2012, Taft decided to build his first Pollo in Addison, as a nod to the city that welcomed his company in. There was another factor at play, one that reveals some of the bulldog personality behind Taft’s mild-mannered interview style. 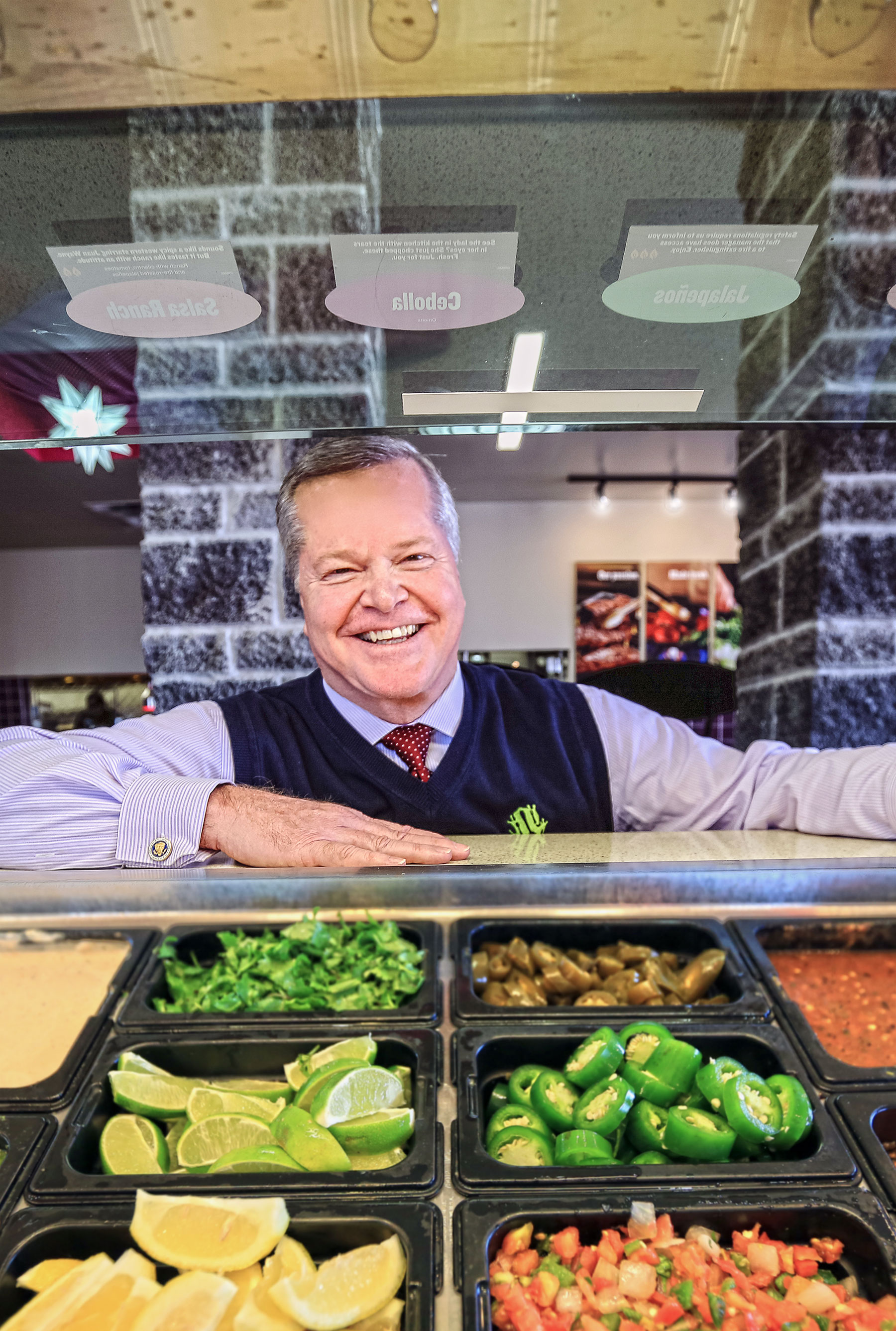 HOME IN THE KITCHEN: Taft has worked in the restaurant industry for more than 30 years, including stints as CEO of Pizza Inn, Souper Salad, and Whataburger.

“This is one of the most competitive 2-mile radiuses that you’ll find anywhere in Texas,” he says. “We are interested in demonstrating how competitive we can be.”

The truth is that Taft—a man who has the build of a high school football coach, but serves as his son’s football team’s water boy, instead—loves a good fight. And he’s not afraid to show it. There’s no doubt in his mind that Pollo Tropical will do well in Texas, because Fiesta has a skillful team of executives who all share his same business philosophy, he says. For Taft, it’s not just about marketing and it’s not just about operations. It’s about lining everything up to create the best possible customer experience. Branding is also key.

Pollo Tropical’s first Texas location will open in March to much fanfare. The company plans to create a big “beach” in the parking lot on Belt Line Road, so guests can play volleyball and compete on Robo surfboards.

Taft, who continues to raise chickens at home, says he couldn’t be happier, now that he’s back in the restaurant business again. It’s an industry he knows well. During his 30-plus years in the business, he has served as CEO of both Whataburger and Souper Salad Inc., along with Pizza Inn. But it wasn’t his first career choice. Taft started out in advertising, at TracyLocke, then led by Dallas Mayor Mike Rawlings, before leaving to take a job at Furr’s Cafeteria and kicking off his long restaurant tenure. Every position that he’s had, he says, has prepared him for driving growth at Fiesta. “I took the job, and I’m very happy I did,” he says.