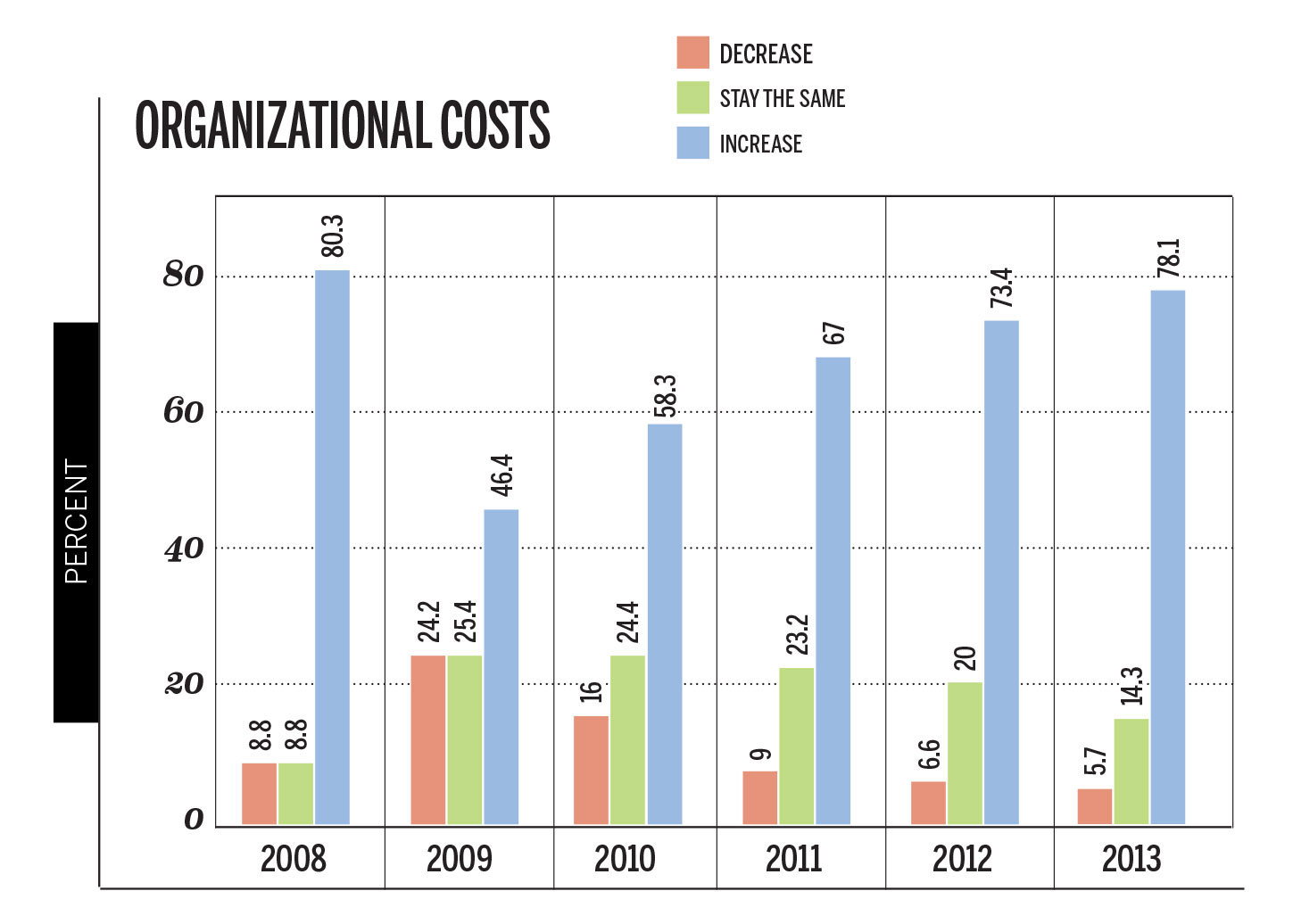 OUTLOOK FOR THEIR OWN ORGANIZATIONS

If 2014 produces regional economic advancement, what will be the impact on our local businesses? A substantial 68 percent of respondents anticipate that their revenues will surge. This figure represents a continued increase in expected revenues that started in 2009. A smaller 51 percent, almost identical to 2012, predict profits will also increase. However, 38 percent anticipate that profits will be similar to this year. The somewhat lower prospects for profits relative to the larger anticipated increases in revenues are a result of expected increases in costs over the next 12 months. Fully 78 percent of respondents predicted that they would see cost increases in the next year.

To combat the pressure on margins brought on by increasing costs, organizations have to find ways to do more with the resources that they have. Thus, more than half (53 percent) expect that their productivity will rise, while 38 percent think it will stay the same. As one would expect, the vast majority of respondents expect to keep their staffing levels flat (54 percent) while, somewhat paradoxically, a significant number (37 percent) expect to increase their staffing levels. Perhaps one place where they plan to hold the line on costs is in employee salaries, where 82 percent expect either no increases or increases of less than 5 percent. These findings are consistent with recent reports such as those from the U.S. Bureau of Labor Statistics showing that our region’s job growth jumped 3.7 percent, while wages increased by only 2 percent. 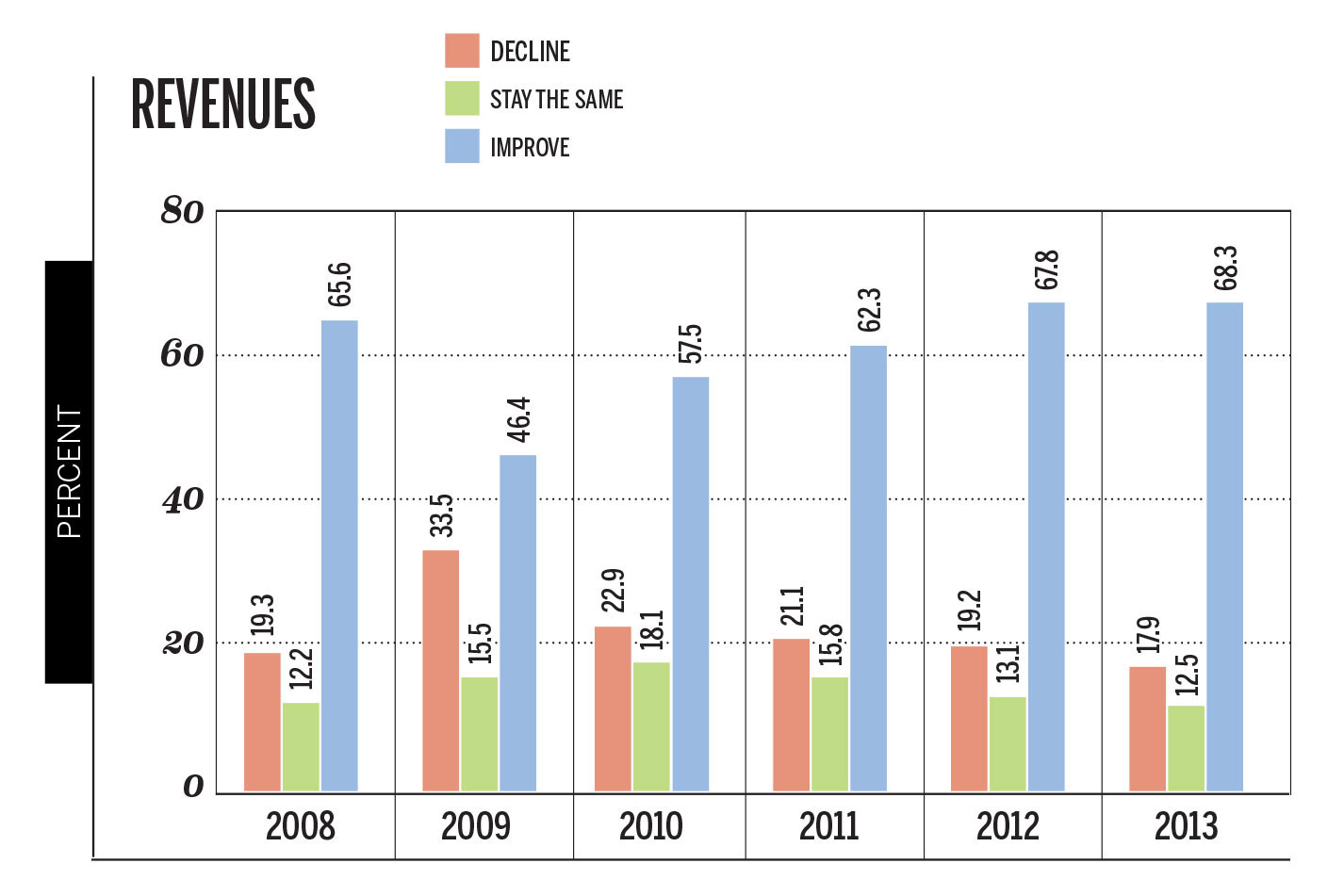 BUSINESS CHALLENGES FOR THE COMING YEAR

Our respondents forecasted a variety of business challenges for 2014. In this year’s survey, the top worry again was the “current economic climate.” While this issue has topped the list of DFW business concerns each year since the beginning of the recession, worry fell from 49 percent in 2012, to 31 percent this year. Also sliding was the concern over “domestic competition,” which slipped from 13 to 11 percent. However, trying to anticipate “changing customer needs and expectations” increased slightly, from 7 to 9 percent for 2014. “Labor availability” remained the same as last year (9 percent), despite dropping to fifth place from its 2012 third-position challenge. The unstable national and international political climate led the respondents to assume that their organizations would experience increased “regulatory and legal” pressure in the coming year, up from 7 percent last year to 16 percent this year. 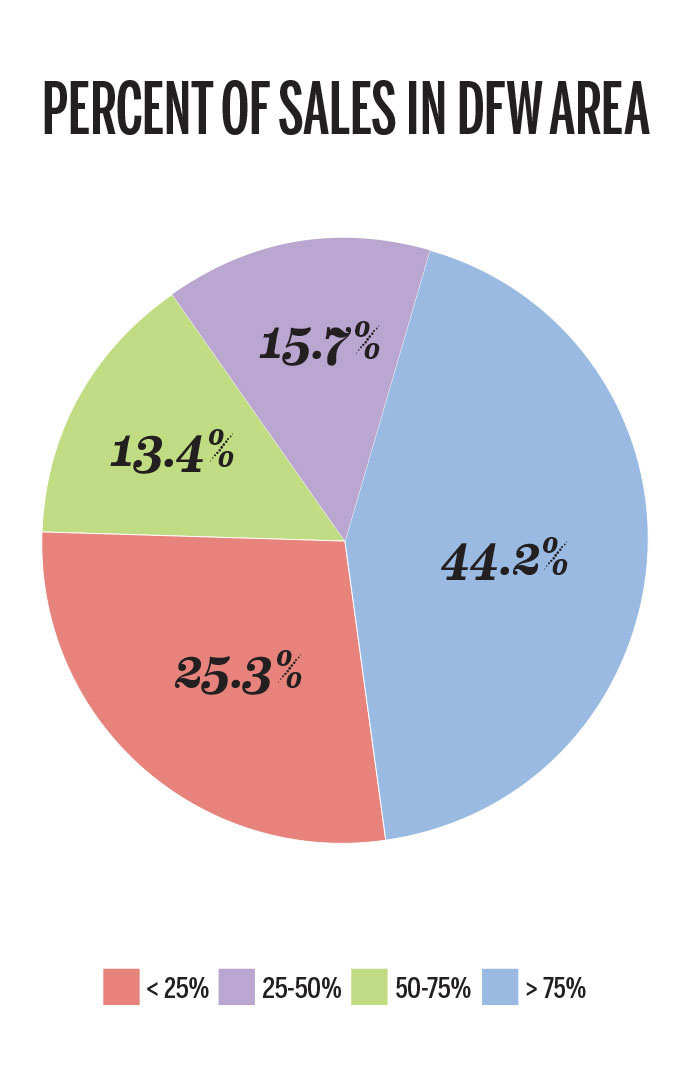 PERCEPTIONS OF THE DFW AREA

Knowing that all of our executives are based in the DFW area, we asked, “What percentage of your sales come from the DFW area?” A significant 44 percent of the leaders responding to our survey indicated that more than 75 percent of their sales came from DFW. When asked, “What geographical market holds the best growth opportunity for your organization?” nearly 90 percent of our responders see all of their business expansion taking place in the United States. The top spot on the list of where to grow the business was their DFW home area, listed by 61 percent of respondents (up from 59 percent last year). In a strong second place was “all other U.S. regions,” with 28 percent. A few small tallies of 1 or 2 percent listed international locations like Canada, Latin America, Europe, China, Southeast Asia, and the Middle East. An argument in favor of actively “looking abroad for growth” was made in the Dallas Global Cities Initiative Forum, hosted by the Brookings Institute, JPMorgan Chase, and the Dallas Regional Chamber. In the last few years, numerous local companies have realized the revenue to be made by becoming multinational. In fact, the National Export Initiative of 2010 was established to help firms explore the potential revenue that could be waiting for them abroad. This would allow the mostly small, private organizations that represent our area’s businesses (and the respondents to our survey), to join the large number of multinational Fortune 500 firms headquartered in the DFW area in tapping the growing global market.

While we found that 9 percent of our group cited “available labor” as a 2014 business challenge, 54 percent believe the quality of the DFW workforce is adequate, and another 25 percent rated it as good (down from 31 percent last year). Thus, when we probed about the types of government action most needed to assist DFW businesses, the second highest response was to “Improve Public School Education,” moving it up 5 percentage points from 27 last year to 32 percent this year.

In previous survey analyses we have emphasized how the quality of DFW education is critical to the continued economic growth that we have come to expect and enjoy. Former Chicago Mayor Richard M. Daley, the chair of the Global Cities Initiative, expressed it well in a Dallas Morning News editorial following the conference: “A recent survey found that while 45 percent of job openings required a bachelor’s degree, 31 percent of adults in the [DFW] region possessed one.” Our higher education institutions are producing plenty of qualified graduates for those jobs. However, the heart of the problem goes much lower, to the elementary and secondary levels. DFW is riddled with problems at those levels. If businesses are going to continue thriving in a manner to which we have grown accustomed, company leaders must become active in the struggle to help find solutions to our community’s educational needs.

Leading the list of top government actions needed was the standard “Increase Financial Incentives,” although it fell slightly this year from 46 to 44 percent. While we did not ask our executives about their level of affection for the DFW area, they identified two ingredients that contribute to the quality of DFW life. Up from 63 to 67 percent was “cost of living,” followed by “quality of travel and transportation infrastructure.”

The solid economic momentum that Texas has built during the past decade, which has allowed it to remain fairly unscathed during the recessionary years, still is one of its best selling points. Gov. Perry seized upon that idea several years ago as he has become our best economic development salesman for persuading business executives in other states to turn their eyes toward the opportunities that exist here.  The fame of our state and region were pointed out again this year in the Forbes selection of “Best Cities For Good Jobs.” Texas scored big by having five of the top 10 cities. Dallas came in first in that ranking, with an expected job growth rate of 2.8 percent. 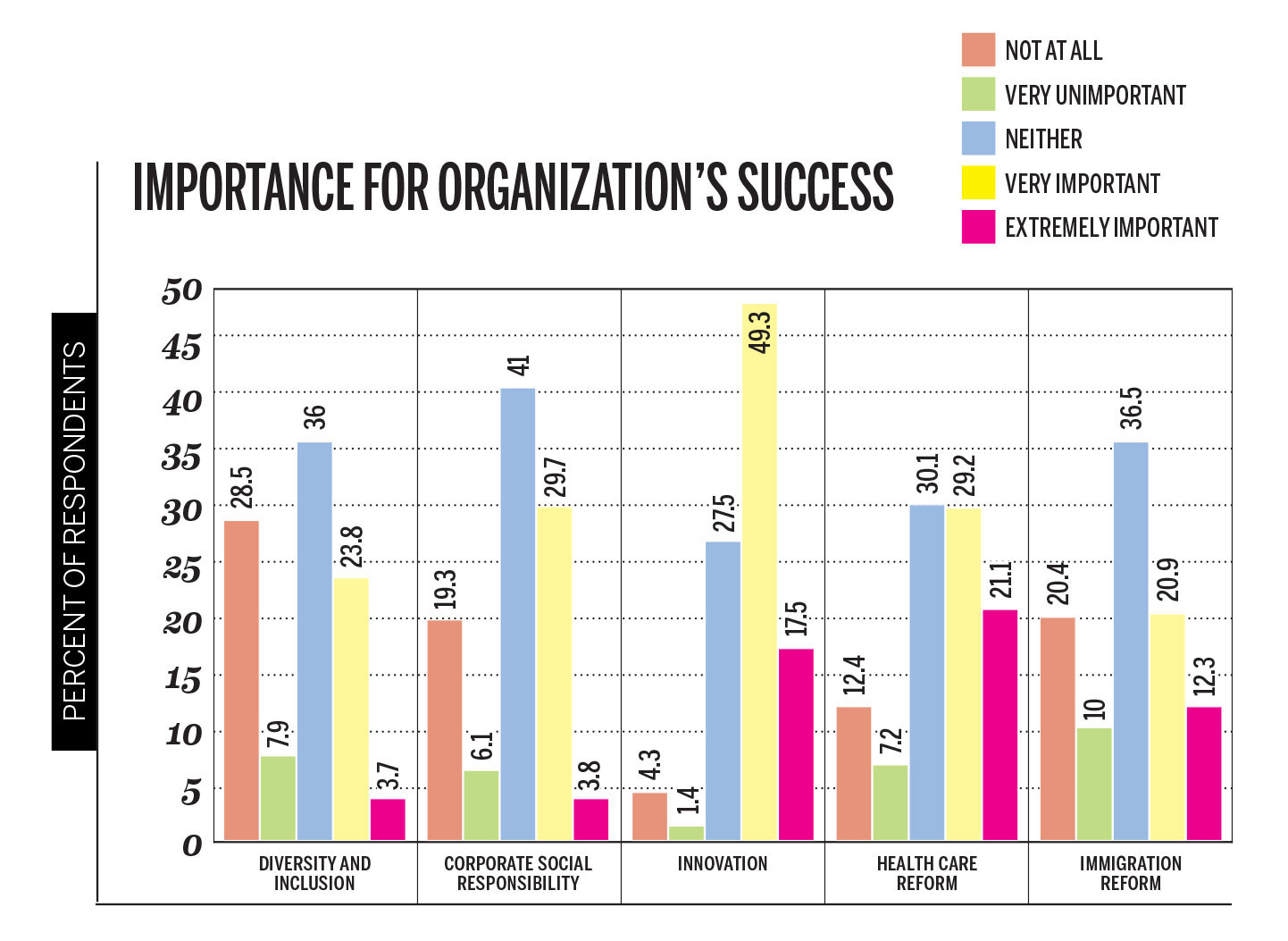 WHAT IT TAKES TO BE AN EFFECTIVE LEADER

Every year we have asked our responding CEOs to select their top challenge as the leader of their organizations. This year they listed “sustaining competitive advantage” (56 percent); “attracting and retaining good employees,” (35 percent); “meeting quarterly earnings projections,” (26 percent); and “maintaining the integrity of their brand” (26 percent) as their top challenges. When asked about the challenges facing their organizations, our respondents listed the current economic climate as the top issue (30 percent), followed by regulatory and legal issues (16 percent) and domestic competition (11 percent).

We have learned from past surveys that DFW executives consider leadership skills to be critical to meeting these challenges and achieving business success. This year we found that 71 percent of our respondents develop and choose new leadership from within their organization. Our CEOs also perceive their organizations to have either good (45 percent) or excellent (27 percent) leadership bench strength.

In their preparation to lead a company and its people, our leaders acknowledged several attributes, or skills, they consider critical for the job. Perhaps our executives had that in mind the old saying, “The buck stops here,” when they listed the top two critical attributes as “sound decision-making” (54 percent) and “strong ethics” (51 percent). Also included as absolutely necessary were: strategic thinking (42 percent); being a good judge of people (24 percent); and developing smooth negotiation skills (24 percent).

Most accomplished people measure their personal success through the results they accomplish. Our executives do the same. In an age when money is often seen as the critical measure of success, only 16 percent identified with that goal. A much larger number, 72 percent, measured it against the success of the company itself. A smaller, yet significant, 52 percent believe they are successful if they can positively impact the lives of their employees and customers. And a still smaller group of 36 percent believes they are truly successful when they have the opportunity to spend more time with the significant people in their lives.

Each of us needs a very close and trusted confident with whom we can share private matters. The spouse of our executives continues to be placed at the top of the list of people they turn to for advice and counsel (65 percent). Remaining in second place is the trusted friend (48 percent), and rotating back into third position is the chief financial officer (22 percent). Most successful people also recognize that they have been greatly influenced by some very important individuals, and usually one or two people surface as the most impactful. For our executives, the spouse was listed as the most influential person to their success (33 percent), with parents placing second (29 percent), and a professional mentor next (16 percent).

When we asked the DFW executives if they are satisfied with their current job, 56 percent responded that they were “very satisfied,” while another 25 percent indicated they are “somewhat satisfied”; only 10 percent indicated any dissatisfaction. Shifting the question to how secure they feel about their job suddenly gave us a different response: 53 percent feel very secure, 13 percent somewhat secure, and 24 percent felt very or somewhat insecure (the remainder were neutral). 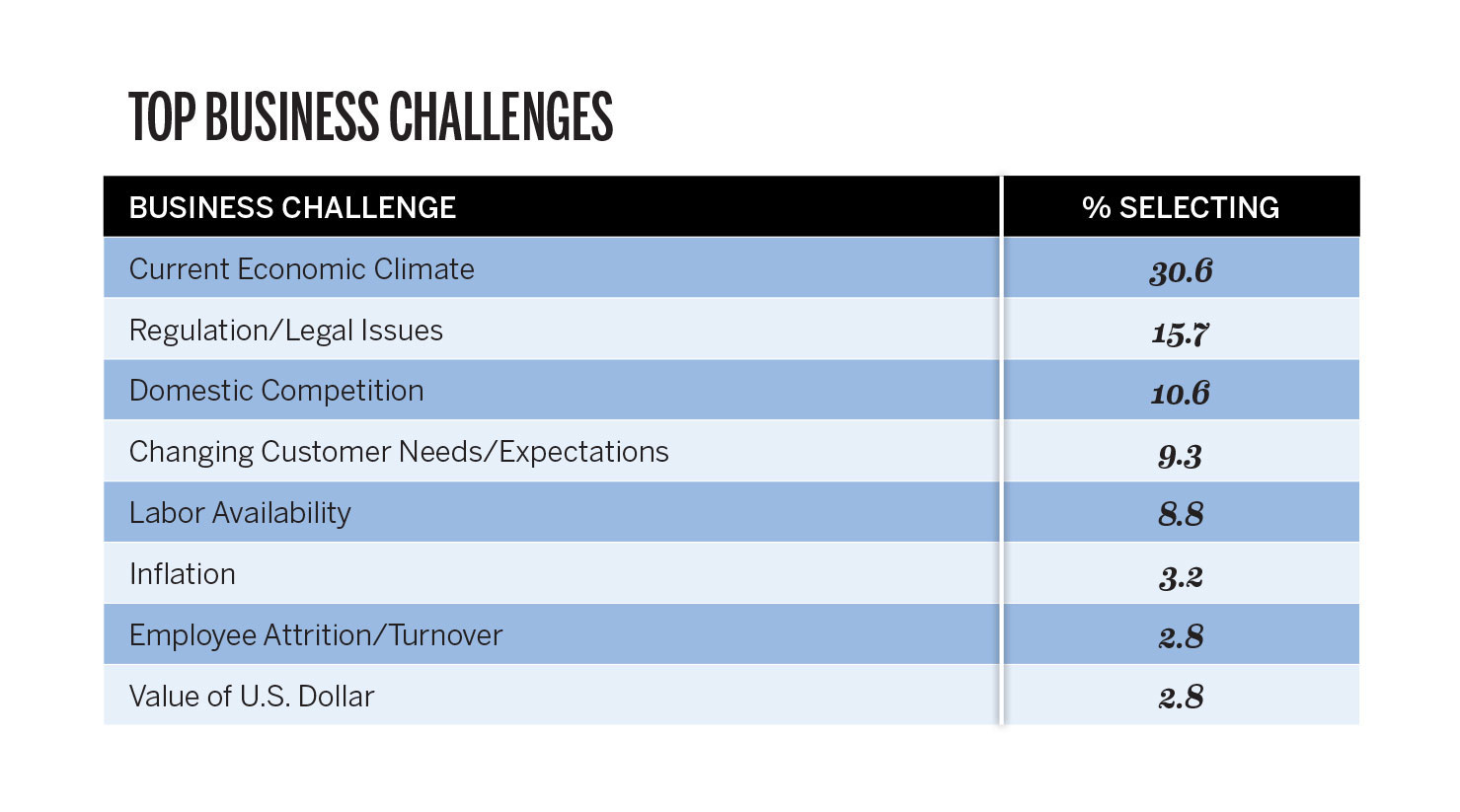 This year, 245 DFW businesses executives participated in our survey, with most carrying the title of president (46 percent) or CEO (26 percent). A large portion of our executives (75 percent) have been a CEO or president for 10 years or longer, and 73 percent have been in their current position for 10 years or longer. Privately owned businesses account for 93 percent of the responses, with public companies represented by 4 percent, and nonprofit organizations by 2 percent.

Most respondents fell into the 50-59-year-old category (38 percent), with 31 percent in the 60-69 year range, and 13 percent who were 70 or older. The balance of respondents (18 percent) are under 50. Males represented 85 percent of our respondents, down from 89 percent last year. The ethnic makeup is 84 percent white or non-Hispanic, and 3 percent are Hispanic. The main media sources our respondents consulted were Fox News (56 percent), while 34 percent read the Dallas Morning News and The Wall Street Journal.

The results of the 2013 SMU Cox CEO Sentiment Survey show a continuing upward trend in optimism since bottoming out in 2011. We also find a widening gap between the expectations for the world economy relative to those of our local area.

Challenges remain in terms of increased cost pressures, remaining competitive, and the ability to attract and retain employees from an educated labor pool. However, local business leaders clearly see their future tied to that of our local region—a region that, luckily, has one of the best-performing economies in the country. As the title of our article states, there is no place like home.