America had just re-elected its president, the world greeted a new pope, and business leaders were hoping that 2013 would show a remarkable improvement in the climb out of the latest recession. However, as with the past few years, the country seems to have just plodded along. Unemployment stayed in the mid-7 percent range and inflation grew slightly higher. The Federal Reserve vacillated on its buyback plans and whistleblower Edward Snowden disclosed the U.S. government surveillance program. The drought persisted, home sales edged up, businesses were still hording money and spending remains tight.

In a nutshell, it has not been the old “business as usual” story that we all grew to expect prior to the downturn. There have been some unusually bright spots, such as increases in manufacturing and the emergence of the U.S as the world’s top energy producer. However, as we wrote this article, Congress and the president were drawing lines in the sand on spending and the debt ceiling. The possibility of a default on our debt had the markets and business owners worried, while everyone was hoping that such a catastrophe could be averted. It was against this backdrop that we evaluated the 2013 SMU Cox CEO Sentiment Survey results.

Last year’s survey revealed the first signs that our area’s business leaders were starting to see an end to the toughest and deepest recession since the Great Depression. After several years of continued decline in their outlook, our survey respondents signaled a renewed sense of optimism about the economy and their businesses. We wanted to see whether our findings this year built upon that reversal or exposed it as a mere anomaly.

In the first part of our survey, we sought to determine how our responding companies performed against their performance goals for last year. The results were generally favorable. For example, 43 percent of CEOs reported that their organizations met their overall performance goals, and an additional 25 percent exceeded them. This level of performance was accomplished through a combination of positive performance on revenue goals (40 percent met revenue goals and 29 percent exceeded them) and cost containment (55 percent met their costs projections). The combination of these two factors resulted in 65 percent of respondents either meeting or exceeding their profit targets. In addition, 63 percent of CEOs reported that their companies either met or exceeded their growth targets last year. These results are consistent with the positive overall performance of the economy of North Texas. We continue to outperform the nation in employment, growth and inward migration. Organizations like those represented in our survey are the growth engines that keep our region moving forward. 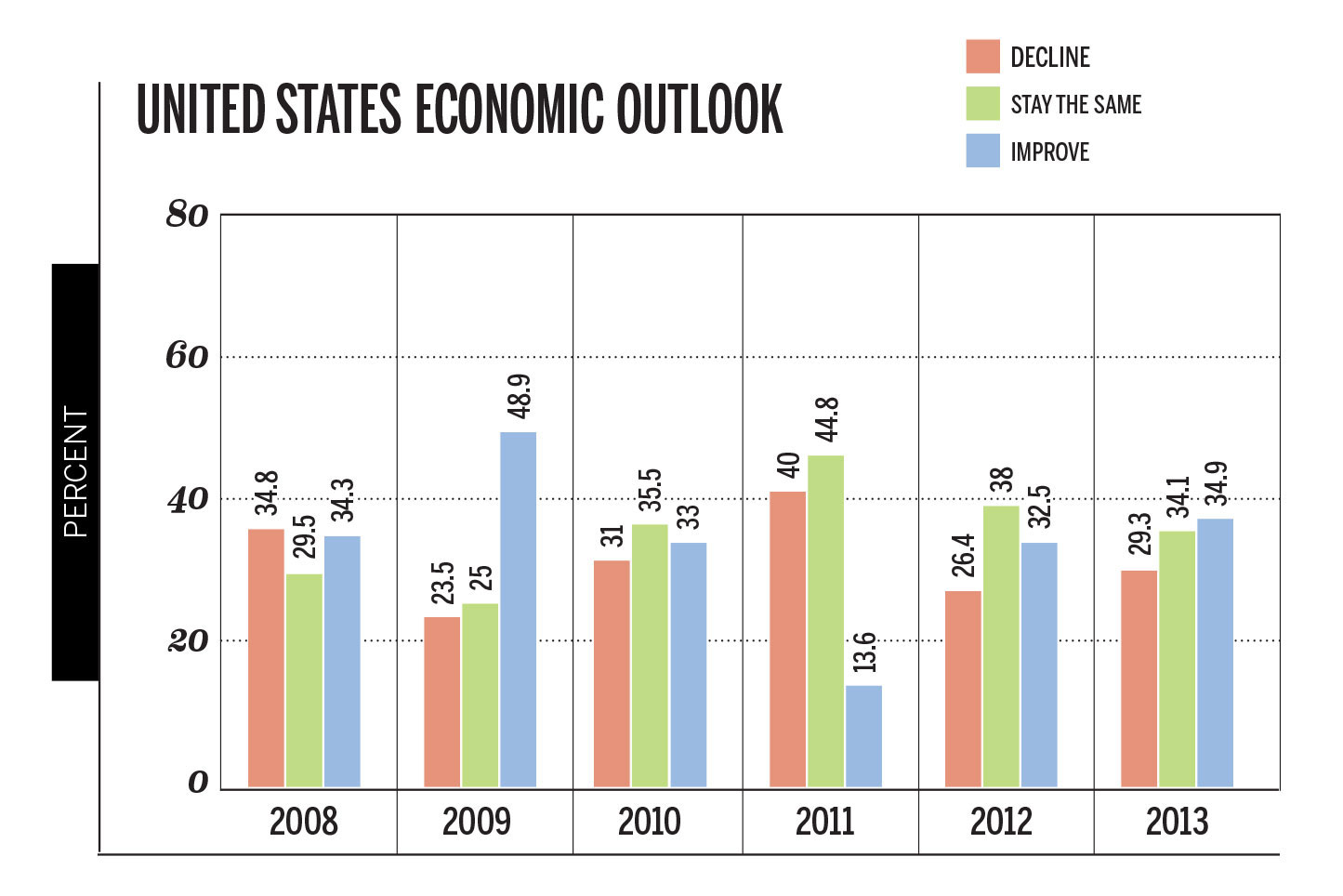 Organizations use capital to make investments based on their expectations of future business conditions. These expectations drive expenditures in material and equipment as well as hiring. Thus, their responses regarding what they see over the next 12 months represents a fairly good crystal ball into the sustainability of our region’s success.

First we asked CEOs how they expected the world economy to perform over the coming year. Only 17 percent expected an improvement in the world economy while a larger 34 percent signaled a coming decline. While being fairly negative, these expectations represent a marked improvement from the results of 2011, when nearly 60 percent of respondents were expecting the world economy to contract. In addition, they are more positive than last year, when only 10 percent thought conditions would improve on the world stage. We suspect that respondents are focused on recent weaknesses in the previously fast-growing economies of Brazil and China when projecting a fairly anemic world economy.

For the coming year, a staggering 66 percent of respondents anticipate an improvement in our already highly performing regional economy.

We then drew our respondents’ attention closer to home and asked about their perception of the U.S. economy over the next 12 months. Again, we found an improvement from last year, with nearly 35 percent of respondents expecting the U.S. economy to advance, compared with 33 percent last year. Interestingly, there was also an increase in the percentage of CEOs who thought the U.S. economy would actually worsen over the next 12 months (29 percent versus 26 percent last year).   In spite of these conflicting findings, the outlook for the U.S. economy is far better than it was in 2011, when only 13 percent expected an improvement and 40 percent thought things were going to get worse.

What happens over the next year in the United States will depend a lot on the general regulatory environment, how budget deficits are dealt with, as well as the overall health of the world economy given the importance of exports to our recovery. Lower energy prices brought on by vast natural gas deposits have also played a big role in helping the U.S. economy recuperate. This is a trend that is likely to continue. Perhaps the split in outlook that we observed among our respondents regarding the U.S. economy represents their divergent views on how these factors will play out over the coming year.

Finally, we turned the CEOs’ attention to our own backyard, and asked about their expectations for the economy in the Dallas-Fort Worth area. The results showed that we are almost back to the record level of optimism documented in our first survey in 2007. For the coming year, a staggering 66 percent of respondents anticipate an improvement in our already highly performing regional economy, while only 5 percent expect a decline. This is a substantial jump from last year’s outlook, when 55 percent of CEOs thought our regional economy would improve and 6 percent expected a decline.

A story that demonstrates the strength and can-do attitude of our region began several years ago, when Gov. Rick Perry and Eric Schmidt, Google’s chairman, were fantasizing about bringing manufacturing back to the U.S. The conversation ended with a question, “Why not in the DFW area?” This fall, DFW took a giant leap into onshore manufacturing when Motorola and Flextronics created the first domestic smartphone factory in the Alliance area. Before the venture, all previous smartphone manufacturing was outsourced abroad. Now customers who purchase a Moto X phone can have them made-to-order and can receive them in half the ordinary delivery time. The joint venture is seeking to prove that having designers, engineers, and a flexible factory, all within the same time zone, will offset higher U.S. labor costs. Currently, the 24-hour operation has some 2,500 employees and produces 100,000 phones a week. The building was formerly used by Nokia, mothballed in 2007, and can accommodate future growth. Earlier in the summer Apple announced that its redesigned Mac Pro also would be assembled in the same facility.