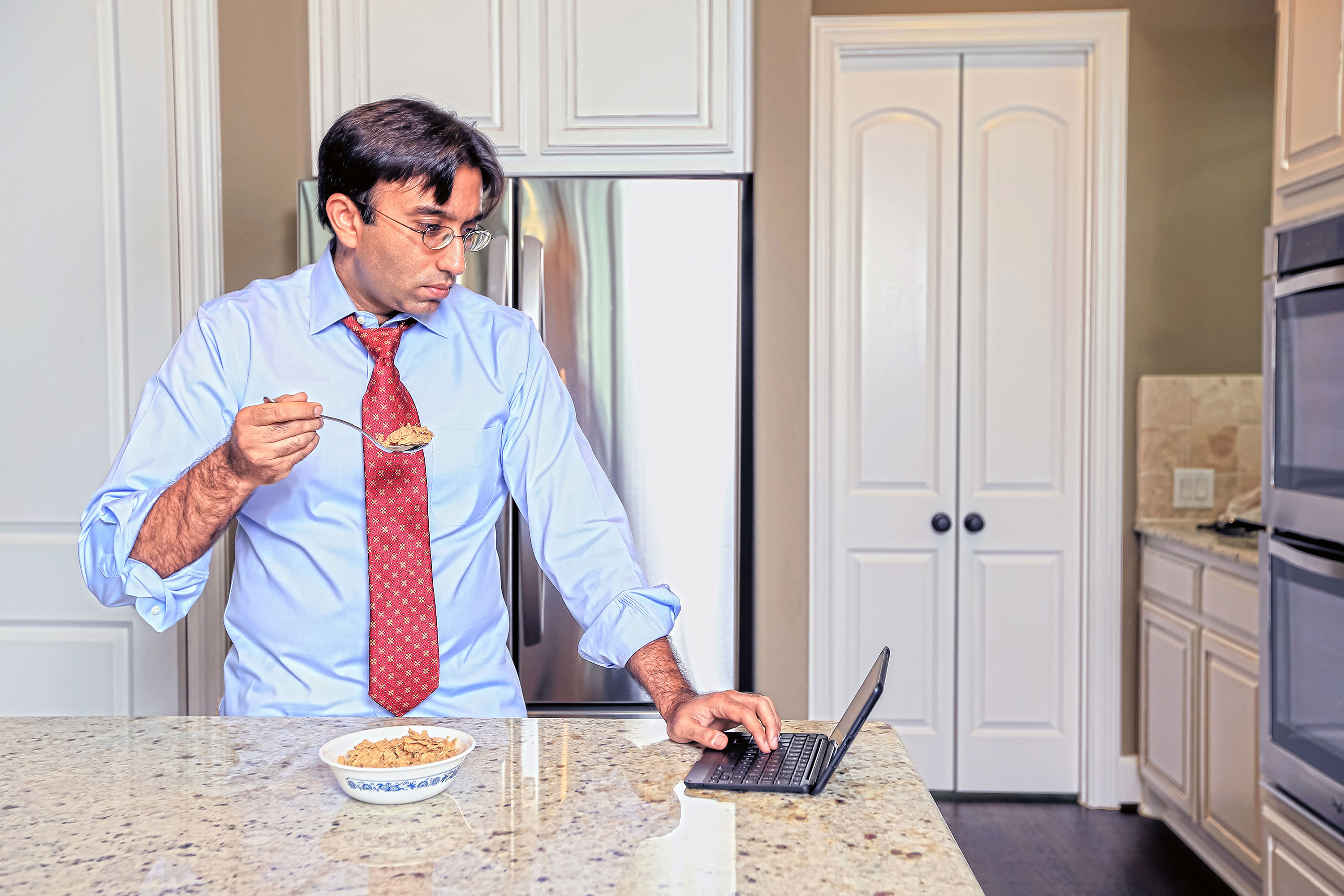 ON THE RUN: Dhir checks on an Atlas Legal matter while grabbing breakfast at home.

From Buchmeyer, Dhir says he also learned how to be a leader. The judge gave his clerks a wide berth to craft opinions; then Buchmeyer used his legendary recall of cases to challenge or tweak their work. “When we got a brief, he’d ask, ‘What’s your opinion?’” Dhir recalls. “He’d remember cases going back 20 years. I’d go back and see if he was right.” And Buchmeyer always was.

By the end of his clerkship, Dhir began to realize that although attorneys from small firms or sole practitioners could perform just as well as big-firm lawyers in the courtroom, briefs from the large firms were usually better researched and presented, giving them an edge. “Why?” he says. “Resource allocation. Their clients pay more.”

This led Dhir to recognize a need for first-class, but affordable, legal research so that attorneys without deep pockets could represent their clients on an even playing field. He asked Buchmeyer what he thought about the idea of launching a firm that sent research work to India, where there’s a half-day time difference and far lower wages. “You are filling a gap,” Dhir recalls Buchmeyer telling him. “You have to start this business.”

By then, Dhir was an attractive candidate for a white-shoe law firm. But the Indian outsourcing concept intrigued him. He had gotten the entrepreneurial bug from his father, who, after losing an engineering job during a construction downturn, opened a small printing business in Las Colinas. His father swore he would never be at the mercy of another employer—a promise that made an impact on the teenaged Dhir.

With the blessing of Buchmeyer, Dhir set up his own Dallas law practice near the campus of Southern Methodist University. Then he made a recruiting trip to India.

DIFFICULT SPECIALTY
A remarkable number of factors had converged to make India the right place at the right time to become the world’s leader in white-collar outsourcing. The country had an abundance of low-cost but educated English speakers, for example. It also had access to cutting-edge telecommunications technology that could link U.S. clients or consumers with Indian facilities as though they were right next door.

The specialty of Dhir’s fledgling firm, Atlas, was more difficult to pull off, partly because of cultural differences. In the United States, attorneys try to make the strongest case possible in their briefs, filling them with highly detailed case law. In India, the opposite is true. There, the practice is to argue the facts and invoke concepts like equity. As a result, Dhir had to disabuse his Bangalore attorney-researchers of the approach they’d learned in law school, and teach them how American lawyers think and how to construct a convincing argument that is more reliant on legal precedent.

“Indians write with a different tone and cadence than Americans do,” he explains. “It’s not better or worse; just different. At Atlas, we had to instruct Indian lawyers to write like American lawyers for an American legal audience. That process involved repeated trips to India, months of hands-on training from the U.S. side, and very extensive quality-control mechanisms to ensure that clients received superlative work product.”

Dhir ran through a number of attorneys provided by a contracting firm that failed to grasp what was needed. Gradually, though, he built up a small cadre of Indian attorneys who did understand, all while Dhir perfected his training program. After launching the effort in 2000, it took Dhir a full year to instruct his first eight Indian lawyers before Atlas opened its doors for business in August 2001.

When I visited Bangalore as a reporter three years later, I watched as one of his attorneys—a graduate of the country’s top law school—excused himself from a high court case after getting a text from Dhir. The lawyer raced his motorcycle to an Internet café (this was before Atlas had secured dedicated office space). There, he asked the manager to switch on the air conditioner, knowing he’d be spending a long day researching Texas matrimonial law for a sole practitioner in Tyler.

The brief was ready to be edited by Dhir’s legal secretary in Dallas by 6 a.m. the next day. And it was emailed to the East Texas attorney before 9. “They’ve done work on about five cases for me now,” the Tyler attorney, John “Ric” Freeman, said at the time. “Their stuff comes in on a timely basis, is well-organized, concise, and easy for the judges to get their arms around. And every brief has been helpful in bringing a successful result for my case.” 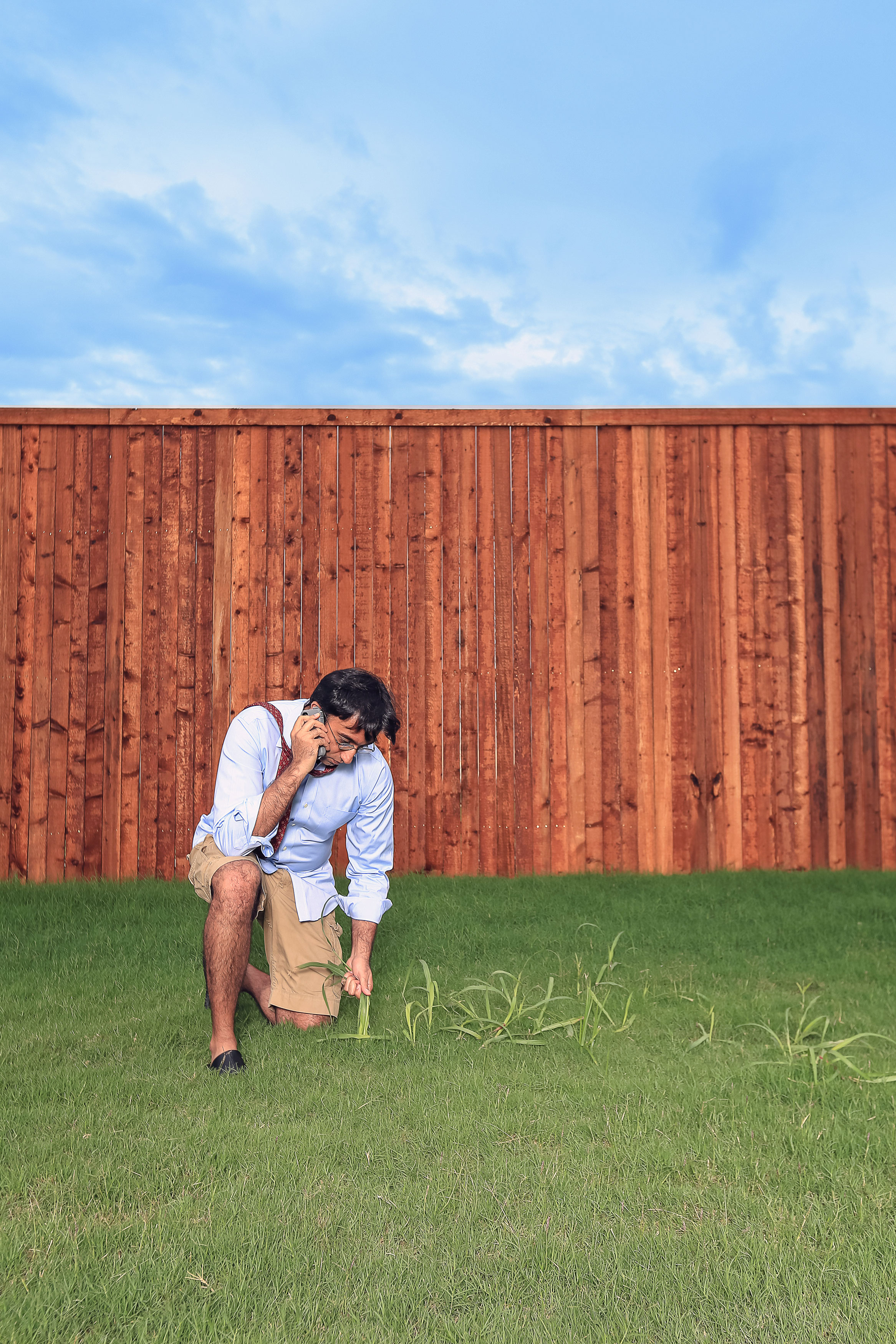 NO REST: Working from home lets Dhir multitask, pulling weeds from his lawn while tending to business on the phone.
POACHING THE TEAM
Dhir’s greatest challenge came several years later, when a large U.S. firm opened its own research unit in another Indian city. The rival firm poached more than five of Dhir’s attorneys, then offered to buy him out entirely. “Look, I’ve taken all your people,” Dhir quoted the American lawyer who managed the competitor as saying.

“I told him, ‘I still have 35. You took people I [had] trained to do high-end research and who were loyally working for my company,’ ” Dhir recalls. Then he added: “They’ll do the same thing to you someday.”

“This didn’t knock us out, but we lost the bulk of our research team,” Dhir says. Undeterred, he proceeded to rebuild the unit.

“Five years later,” he adds, “the same guy emailed me and said he had fired [the lead hire]. He told me, ‘I should have listened to you.’ ”

MEETING NEW CHALLENGES
Another big challenge for Dhir came in 2007, after a large document-review project detailing Native American tribal law for a New Mexico firm came to a sudden halt. “I had 35 people almost idle,” he says. “I kept everyone, although I was losing money big time—$150,000 to $200,000” in a year. That was the cost of retaining expensively trained staff and creating a reputation as a reliable employer, Dhir knew. Nonetheless, some of his employees got nervous and quit.

Before India’s economic boom began, middle-class Indians held tightly to their jobs. But in more recent years young Indian professionals became like kids in a candy store, gorging themselves before hopscotching to the next firm for an extra $150 or $250 more a month. When their former classmates are bragging about ever-higher salaries, the inducements are often too enticing.

“I cautioned them to be careful, that the economic boom could be short-term,” Dhir says. But few heeded his warning. Sure enough, though, India’s GDP growth has dipped to 4.4 percent, down from an average rate of 7.7 percent from 2002 to 2011. Meantime the value of the rupee has fallen and imported goods are being priced out of the reach of many Indians.

Things also changed with the onset of the Great Recession in the United States. The tough times created a glut of unemployed and under-employed U.S. law school graduates. In India, meanwhile, salaries and overhead continued to climb. “It took six months to a year to train an Indian attorney, while the Americans came pre-trained,” Dhir says. “And Americans don’t mind working from home; some even prefer it. But in India if you work from home, it’s not seen as a real job.”

Because regulations often aren’t applied in a consistent manner, Dhir was sometimes forced to fly to india to sort out bureaucratic snafus.

India’s primary outsourcing advantage had been the lower salaries paid to employees, even for highly placed professional workers. But that was changing, and other costs were becoming comparable or higher there as well. “Even 10 years ago, India’s land prices in large metropolitan areas were about the same as those in the U.S.,” Dhir says. “Capital expenses, like internet and equipment, were typically more expensive.”

Then there were the “hidden costs” foreign entrepreneurs paid after their passage to India—costs for training and to compensate for increased attrition. Indeed, “training and quality control turned out to be our single biggest cost factor,” Dhir says. “It affected how fast we could grow.”

Another factor that Dhir hadn’t fully grasped when he’d outlined his business plan to Buchmeyer years earlier: India’s burdensome compliance and reporting rules. In the U.S., a single shareholder company can be set up in about a week; in India, it can take three months or more. If there’s foreign ownership, India requires at least one Indian shareholder. Then there’s the mandated reporting of corporate minutes, along with proof that an annual shareholders’ meeting was held—all time-consuming exercises requiring outside professionals to process and file. And, because regulations often aren’t applied in a consistent manner, Dhir was sometimes forced to fly to India to sort out bureaucratic snafus.

After the Great Recession, compensation for American lawyers decreased, which meant that India’s competitive advantage narrowed further. “Mind you, this is only for functions that require very heavy training, such as research and writing,” Dhir says. “For tasks that are more scalable—like reviewing documents or summarizing contracts—India still has an edge. But it’s not as definitive an edge as it used to be.”

‘PRINCIPLES OF ADAPTABILITY’
Shifting work back to the U.S. has reduced Dhir’s frustration level and made Atlas easier to manage. Among his first American recruits was Kevin Grubbs, who had recently graduated from SMU’s Dedman School of Law when he became an Atlas contractor in 2010. The Lewisville attorney, who became a full-time employee two years later, had never wanted to be a litigator, preferring research and writing instead. But he didn’t know full-time work like that existed until he saw an Atlas job posting.

These days, you’ll often find the 32-year-old Grubbs working till 1 a.m., seated on a sturdy dining-room chair before his computer while the theme to Pirates of the Caribbean echoes through the house. He takes lunch and dinner breaks, will watch some prime-time TV, and later chat with his wife. Then he’ll resume a workday that began at 9 a.m. For exercise Grubbs uses a treadmill, and don’t be surprised to find him walking on it while he reads a case file. He bills 50 to 60 hours a week, he says, not including administrative chores.

The young attorney might meet with Dhir once every couple of months if there’s a big case to discuss. But he doesn’t miss the lack of office camaraderie while working at home. “We do a lot of text messaging or Skype-ing,” he says. “But most of the time I am too busy to think about it.”

Today when an Indian quits Atlas, Dhir replaces that employee with an American like Grubbs. Atlas Legal Research now employs about 25, including just four in India. “This has been a lesson for Atlas in the principles of adaptability,” Dhir says. “A company must always evaluate and re-evaluate its environment, and see what changes need to be made in order to continue to thrive and deliver results.”