At a time when 20-something men are embracing vintage threads and old-school brands like Pabst Blue Ribbon beer and Old Spice grooming products, reaching into a clothing company’s storied past could be a smart marketing strategy.

Haggar Clothing Co. is betting on it. A leading maker of men’s casual, dress, and tailored clothing—and one of Dallas’ iconic hometown brands—Haggar has begun highlighting the company’s 87-year history and its many notable innovations in the pants business. Back in 1938, Haggar coined the term “slacks,” for casual pants worn during “slack” time away from work. Two years later the company introduced the first pre-cuffed pants, which did away with the need for tailoring. In 1952, the company launched the first wrinkle-free pants, while signing up Mickey Mantle as its “Forever Prest” pitchman. And then there was Haggar’s 1970 invention—doubleknits—which pushed the company to become the No. 1 pants brand in America.

It’s a colorful history and, to CEO Michael Stitt, reconnecting with it has multiple purposes. “We are trying to energize the team and develop this entrepreneurial spirit,” he says. “I want to create an environment where people are passionate and engaged.” 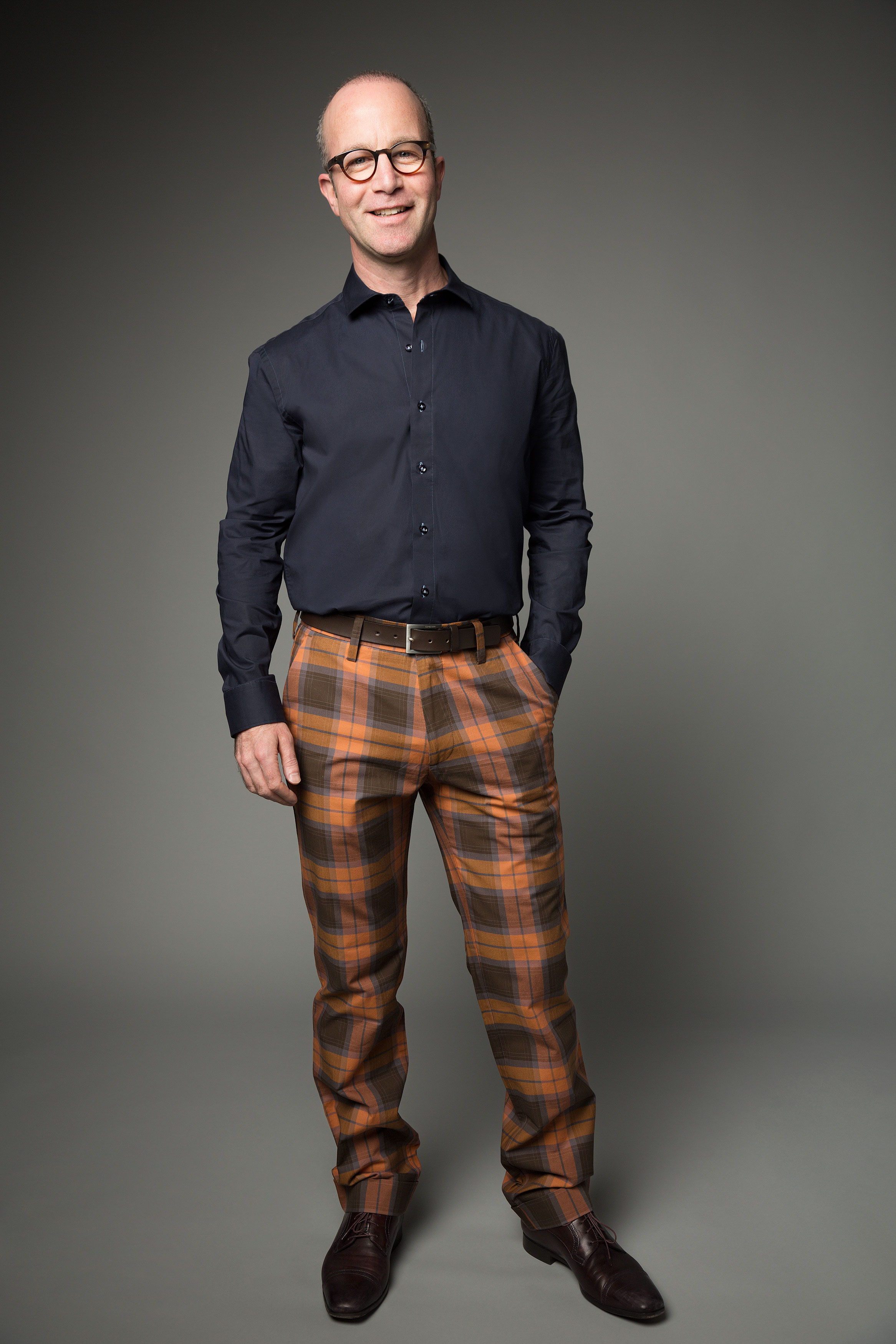 MAD FOR PLAID: Stitt sports heritage plaid pants from Haggar’s spring 2014 vintage collection.
Invoking the company’s past, which is on display in posters throughout its Luna Road headquarters, reminds the roughly 170 employees in the building how dynamic the company has been since Joseph M. Haggar, a Lebanese immigrant, opened a one-room office in 1926. Within two years, he had 500 workers churning out 75,000 pairs of pants a year.

In 2005, Joe Haggar III and the company’s board sold Haggar for a reported $212 million. It now is owned by Perseus LLC, a merchant bank and private equity company, along with a unit of Pou Chen Group, a Taiwan-based shoe manufacturer. But Stitt wants to rekindle some of the old-fashioned drive and spirit that made the then-family owned business successful in the first place.

After running the company’s Canadian subsidiary for 13 years, Stitt was promoted to chief executive in April 2012, rising to his position at a time when Haggar has been stable and profitable. It has a market-leading core business in men’s dress pants, where it’s No. 1, and in casual pants, where it’s second only to Levi Strauss & Co.’s Dockers brand. Still, Stitt says, there was a sense the company could be performing at a higher level.

“When I came in I had detailed discussions with the board about setting a clear strategic direction for this company,” says Stitt, whose rapid, energetic delivery betrays just a hint of a Canadian accent. “We need to protect our core ‘bottoms’ business, in which we’re market leaders, and then find other business units that we can grow and develop.”

Toward that end, he made some changes in the executive team and has been using a hands-on approach to try to improve employee engagement and the overall workplace atmosphere. The Great Recession, which made for some lean years in the middle-market men’s clothing world, and a series of CEOs—three in seven years—had taken its toll on company morale. “Within a few months of being here I saw the results of an employee survey, and basically morale was a three or four out of 10,” he recalls. Reasons for employee dissatisfaction included “everything from pay and benefits to [not] knowing the company’s strategic direction to job security.”

Stitt approached his board and received approval for company-wide pay raises, which were given earlier this year. And rather than passing on health insurance cost increases to employees, the company absorbed this year’s hike and cut worker premiums by 25 percent.

“For me, it has always been clear the associates drive the business,” Stitt says. “To show the team we believe in them, we also needed a well-defined bonus plan tied to [earnings]. The more profit, the more everyone’s going to share.”

He also instituted a policy of being more open about the company’s financials with the company’s roughly 700 employees, including those 170 at its Dallas headquarters. Before it was sold in 2005, Women’s Wear Daily reported that Haggar had annual revenue of just under $500 million. But that figure shrank by at least a third after the company sold off its women’s business and closed its private-label division, which produced clothing on paper-thin margins for discounters such as Wal-Mart. Although he would not provide specific figures, Stitt says Haggar is on track this year to grow its top line by more than 10 percent, and to improve profitability. Also this year, he says, the company has added 85 basis points to its leading, 6.5 percent share of the men’s dress-pants market. Stitt says Jos. A. Bank Clothiers is second, with 3.5 percent.

Those who’ve worked with the Haggar CEO in the past say high-energy, high-ambition has always been his style. And he has some lofty goals for Haggar as well. “I’m not one to say, ‘The market’s growing at 2-3 percent, so we’ll do that,’” Stitt says. “I’m thinking 10, 15, 20 percent. What do we need to do to get to those kinds of levels?”

At the same time, he says, he’d like to see Haggar become the best company to work for in Dallas. A more recent employee survey showed he’s not there yet. Employee ratings have risen across the board, but some only fractionally. “It wasn’t crazy improvement, but it was meaningful,” Stitt says. “Clearly there’s more to be done. I’m a big believer in continuous improvement.”