In 1978, just a couple of years out of college, Bob Morris was toiling away at a four-person architecture firm in small-town Ohio when he read a Time magazine article about Dallas. “I think it initially grabbed my attention because there was a big picture of a Dallas Cowboys cheerleader on the front,” he says. “But the article talked about the city and its growth—a big, new, beautiful land of opportunity.”

Like many from the rust belt during that time, Morris decided to seek his fortune in the Lone Star state. He sold his motorcycle, packed up everything he owned, and headed to Dallas, where he bunked with a buddy from college while he looked for a new job. What he read about the city and its opportunities turned out to be true. Within just a few weeks, Morris had six job offers from various firms. He narrowed it to two choices, but was having a tough time making a final decision. So climbed into his car with a couple of beers—perfectly legal back then—and figured he’d drive until his mind was made up. Deep into East Texas, in the middle of the night, Morris decided to go with the offer that paid him the least—$10,300 a year. He had a good feeling about the firm, Corgan, and became its 13th employee.

Today, 35 years later, the company has grown to become a 350-person shop with offices around the globe—and Morris is at its helm as president and CEO. “I never really felt a need to be anyplace else but here,” he says of his long tenure. “I still get up every day and look forward to coming to work. It’s because of the people, and because the firm always afforded me the opportunity to do whatever it is I thought I could do.”

Those opportunities came early on. In 1980, just two years after joining Corgan, he was involved in secret meetings with former American Airlines CEO Al Casey, as the corporation was plotting its headquarters relocation from New York to Dallas. Morris served as project manager for the airline’s initial 650,000-square-foot- space. That relationship led another New York company, Dean Witter Reynolds, to contact Corgan in 1984 when it needed help with a data center redevelopment on the south side of downtown Dallas. Morris spent several years immersed in the project, and discovered a fascination for tech space.

“Buildings are about a lot of different things, often about aesthetics. But they’re also about what they do and how they function and perform,” he says. “Data centers are incredibly complex projects— understanding what they are, what they need to do, and how they need to stay alive no matter what occurs.

“The data centers we design carry daily trades for the New York Stock Exchange, they process credit card transactions for Citigroup and Wells Fargo, they’re responsible for maintaining records for huge insurance companies—they affect the whole country’s ability to do business in a safe and secure manner.” 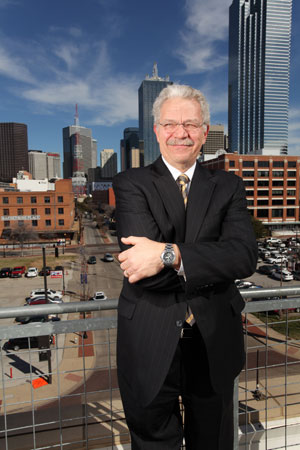 DEAN OF DATA CENTERS: Corgan CEO Bob Morris is one of the nation’s leading experts on the design of mission-critical facilities. Photography by Scott Womack
Photography by Scott Womack
Corgan is now the No. 1 data center design firm in the country, based on volume of work. And Morris is arguably the nation’s foremost data center design expert. It’s a sector that continues to evolve. Hardware is getting smaller, but demand is growing at a rapid clip.

“No matter how often we go in and weed things out—which in data center terms is virtualization—it’s still going to get filled back up again.”

Core Competencies
Diversification has been key to Corgan’s growth. Along with mission-critical/data center work, it maintains several core practice areas—aviation, education (K-12), corporate buildings and office interiors, and healthcare—and is very strong in each. It also offers digital visualization services through Corgan MediaLab.

Recent local projects exemplify its range. In 2012, it did commercial office and interiors work for Maxim Integrated’s Dallas office, Encana’s new regional headquarters in Plano, Southwest Airlines’ headquarters renovation, and PFSWeb’s call center and headquarters. It’s also renovating the atrium of Plaza of the Americas in Dallas and working with Traxxas on its 29-acre corporate campus in McKinney. Area data center projects include work for Cyrus One and Stream.

Corgan completed the new Adamson High School for the Dallas Independent School District in 2012, as well as the new Dallas City Performance Center. Local aviation projects include Love Field’s terminal modernization (Corgan designed the original airport back in the 1950s) and renovations of four terminals at Dallas/Fort Worth International Airport.

Don Mills, executive vice president for design and construction at KDC, has worked with Corgan, and Morris, on a number of projects over the years. “The firm has become a real reflection of Bob,” Mills says. “They do a good job of understanding how our business works, and their designs reflect that. They’re very easy to work with and are team-oriented.

“They understand and respect schedules and budgets, maybe a little better than their peers. I don’t think it’s a coincidence that the last several years, even during the recession, Corgan has done more than hold its own.”

Along with Dallas, the firm now has offices in Houston, Los Angeles, Miami, Phoenix, New York, Beijing, and Dubai. It’s a long way from the two-person shop founded by Jack Corgan in 1938 to specialize in movie theaters and drive-ins. This year, to mark the firm’s 75th anniversary, Corgan is launching “75 Days and 75 Ways,” a yearlong community service project that involves 75 different charitable events.

Looking forward, Morris, who was named president and CEO in 2010, he says he plans to continue focusing on sustaining the fi rm’s culture—which was what initially attracted him to Corgan 35 years ago—and becoming more engaged in global opportunities. He also is working harder to develop young leaders within the firm.

“So much energy is spent on taking care of clients, doing projects right, applying creativity, and solving problems,” Morris says. “To step back and develop better leaders, the firm has to put intent behind that. A company of our size can’t just rely on the organic development of leadership. We need to work on building even stronger, better leaders than those of us here today. They’ll have a bigger firm, a more complex firm, and a more diverse fim to lead.”