You don’t still clip coupons, do you? Most of us do, actually. Consumer surveys suggest about 80 percent of Americans use coupons. But wouldn’t it be great if you didn’t have to look for coupons that mattered to you? What if the products you want and the stores you shop at sent offers based on your past purchases and current location?

We aren’t far away from that reality, according to Frisco-based Koupon Media CEO T.J. Person.

Person’s company is taking an interesting approach to creating, offering, and redeeming digital coupons. The company is nudging us along the slow march toward a society where the smartphone becomes our wallet, payment mechanism, passport, and hotel room key.

Koupon claims to connect retailers, brands, and consumers more efficiently, using smartphones and a specialized software platform it sells as a service. And that’s the big deal here. Local media stations have covered Person before, each time missing that software-as-a-service piece. But it really is a major reason Koupon is breaking through where so many companies have failed.

When I visited Person’s office, I took note of the 20-ounce Starbucks coffee sitting on his desk. And guess how he paid for it? With the
Starbucks card app on his smart phone. “I go every day, and I think the card [application] is more convenient than cash,” he explains.
Person’s background is what you’d expect for someone who pays for coffee with a phone and spells coupon with a “K.” Formerly with Samsung Telecommunications, Person helped start a mobile marketing and content management agency called Mango Mobile in 2005. The company was bought by Radiate, a subsidiary of The Omnicom Group, in 2007. In 2009, Mango was merged with GMR Marketing, another Radiate-owned concern.

While leading GMR, Person worked with Dallas-based 7-Eleven Inc. to run promotional campaigns that encouraged consumers to send text messages to the convenience store chain in exchange for a free drink coupon. One promotion involving a 200 7-Elevens in the San Diego area proved consumers will ask for offers via their mobile phones and then redeem those offers in stores.

That brings us to March 2011, when Person and Scott Hutchinson founded Koupon Media. Formerly called mComm360, the company was part of the spring 2011 class at TechWildcatters, a startup accelerator in Dallas. Later that year, Koupon raised $2 million in funding from investors DFJ Mercury and the Matthew Pritzker Co. In April 2012, Koupon raised another $4 million from a group of venture capitalists led by Dallas-based Trailblazer Capital.

Person says it is time for couponing to join the Internet age. “We looked at couponing and nothing’s really changed since the 1800s,” he says. “You still have to physically go in [to stores] and use a piece of paper. And I started looking at the data and there is like … 99 percent waste. It’s crazy.”

He’s right. Crazy. In the 1890s, Atlanta businessman Asa Chandler, the man who built The Coca-Cola Co., is credited with first distributing paper coupons as a way of getting folks to try his sugary-sweet new drink.

And the waste? Consumer products makers distributed 305 billion coupons in the U.S. last year. Those coupons offered $470 billion in
discounts. But even with all those offers coming in the mail, at the point-of-sale, and tucked into newspapers, shoppers only redeemed about $4.6 billion in coupons—less than 1 percent.

Software at Your Service
Person describes Koupon’s business as “the first software-as-a-service mobile coupon management platform.” It’s an Internet-based business that sits between brands, retailers, and consumers. Since the platform is just a base of code for hire that can be delivered anywhere, one retailer can pay a licensing fee and do everything itself. Another might benefit from a more full-service approach.

For example, Koupon could help a brand like Pepsi create, send, and track an offer on Facebook for its products, redeemable at 7-Eleven stores. It could just as easily help 7-Eleven send a special discount to all of its iPhone app customers who buy more than three fountain drinks per week. It’s all digitally tracked and delivered. So whether it happens via mobile app or on a social networking site is irrelevant. In both examples, there’s no perceived middleman and no third-party website to visit.

That transparency is a big deal, Person says, because past mobile coupon attempts haven’t been as attractive to retailers and brands as they were to consumers. “It takes a lot of infrastructure on the retailers’ side to make an offer,” Person says. “[Coupons are] like cash, but without all the monetary controls that the federal government puts on paper money.”

Koupon, he says, assumes all the risk of distributing, verifying, and redeeming mobile coupons, and it requires no complicated update to a retailer’s point-of-sale systems. In exchange for building smartphone applications for retailers and convenience stores and for taking the financial risk of redeeming coupons, Koupon gets paid by taking a per-transaction cut each time a coupon is used; it also charges placement and redemption fees to retailers and brands, depending on the campaign. 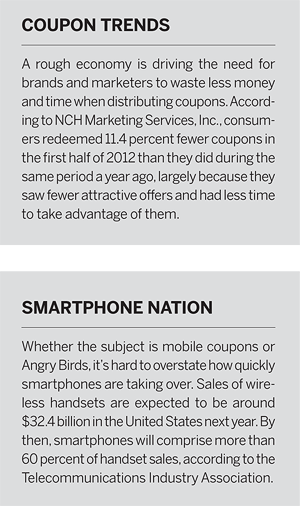 The software-as-a-service business model means the underlying architecture for Koupon’s systems stays the same, and every added feature becomes immediately available to all other brands and retailers on the Koupon platform. The ability to enable, distribute, and track coupons and promotions without getting in the way makes it possible for just a few employees to serve dozens of large companies. Koupon has about 30 employees now and is hiring to support its growth.

Michaels Stores Inc., the Irving-based crafts and hobby store, pays Koupon a monthly fee to use its platform to set up its own offers, promote its own products, and create coupon games—like a scratch-off savings game for its iPhone app.

Michaels can generate offers without needing to mail a printed coupon to a fulfillment center. It can check an online portal to see daily performance reports. If an offer is working—or only working in certain locations—Michaels can update and target the offers on the fly.
One Michaels iPhone promotion ties into TLC’s “Craft Wars.” After a short video, viewers are offered a coupon for 40 percent off a single-item purchase at Michaels. Koupon’s software serves up the barcode, which is good for—get this—a single use on a single day in a single location. Michaels wastes no paper or postage here, and it could come away with real data it can use to make me a better offer next time—or to get customers to return to a specific store.

Besides simple discounts, Koupon’s system allows a chain like Michaels to create single-use coupons that are specific to each of the store’s stock-keeping units (SKUs), the codes used to identify its products. Michaels Stores average 35,000 SKUs from about 600 vendors, so the ability to analyze what kinds of customers are buying certain items is critical.

With 7-Eleven and other convenience stores, Person says, one of the goals is to target consumer behavior so stores can make timing- and location-based offers, arriving at the right combination of convenience and relevance.

7-Eleven should be a great case study in how far we can push smartphone technology in our busy lives. About 25 percent of the U.S. population lives within 1 mile of a 7-Eleven store. Nearly 2 million people each day purchase immediately consumable food at 7-Eleven in the United States. More than half of 7-Eleven’s daily customers buy a non-alcoholic beverage.

Indeed, a lot can be learned from 7-Eleven’s point-of-sale systems. But who are these customers? With a mobile app and coupons, 7-Eleven can fill in the gaps and provide brands and consumers a better experience.

Each store and brand can decide how granular it wants to get. Person says Koupon’s management system gives convenience stores more than 20 attributes—things like age, gender, and ethnicity—that can factor in.

It could seem intrusive but, c’mon: This is 2012. Do we have to tell vegetarians about a two-for-$2 hot dog sale?

Alhough Person calls the mobile wallet the “holy grail” of what’s possible with smartphones and the mobile Internet, he’s keeping things laser-focused at Koupon. “When we first got into this, we thought that we had to do many different things to be successful,” he says. “But we found that there’s so much scale, you can focus on one or two areas and it can be a very big business.”