No sooner have we settled into our booth in the noisy, crowded dining room of Cindi’s N.Y. Delicatessen off Central Expressway than JoAnn Brumit is handing me a book that she’s recently written and published via Amazon. It’s titled, Letting Go: Surviving & Thriving Through Life’s Greatest Trials, and before we’ve had a chance to order, the CEO of Garland-based contract manufacturer Karlee is opening up about all she’s been through during the last 10 years—difficulties that would severely test the strength of any business owner or parent.

When the national economy took a downturn right after the turn of the millennium, Karlee was hit hard. About 95 percent of its business at the time came from clients in the telecom industry, a sector that was shredded when the tech bubble burst. Karlee saw its annual revenue plummet from $120 million to just $18 million. The company, which had never had a layoff in its nearly 30 years, was forced to let 180 of its 500 employees go. Equipment had to be sold for pennies on the dollar. The possibility of bankruptcy loomed.

If that weren’t awful enough, in December 2002 a personal tragedy struck: Brumit’s 31-year-old daughter committed suicide. The lessons she learned in surviving this devastation were what spurred the CEO to write her book.

That’s some heavy subject matter to dive into at 7:30 a.m. on a Thursday. I feel almost silly turning my mind to the menu, weighing whether I should indulge in the Pigs in Blankets. Brumit loves to come to Cindi’s with her husband, so she already knows what she wants: the corned beef hash and two soft-poached eggs, with a lightly toasted cinnamon raisin bagel and a side of grits. To drink, she opts for a cup of hot tea.

Karlee has rebuilt since its darkest days. Today it manufactures (among other things) enclosures for telecom equipment, medical instrument components, guidance systems for bombs, and night-vision scopes. Annual revenue is back up to about $50 million, and the client roster has been diversified so that telecom now accounts for only 60 to 70 percent of the business. But, getting there hasn’t been easy.

Not that the course was necessarily smooth, or without mistakes. When, after Karlee posted its first-ever quarterly loss and its bank called its bonds, Brumit decided to find all the cash she could to pay them off.

“What I should have done is ran up my $5 million, $7 million line of credit, drew it all off, put it in the bank,” she says. “Then I’d have had them with some skin in the game, and they would have supported me. But of course they didn’t have any skin in the game, so they took one look at me and thought, ‘Oh, let’s minimize our risk and get them out of the bank.’ ”

Brumit’s husband, Lee Brumit, founded Karlee in 1974, before they were married, and the business was still only a 13-person operation when she came aboard in 1981. They wed a year later, and she believes it’s their differing talents in the partnership that have helped the company endure.

“Many entrepreneurs are good on one side of the business, but not good on the other,” she says. She handles strategy, team-building, and finance, while Lee deals with equipment, facilities, and manufacturing processes, covering all the bases. 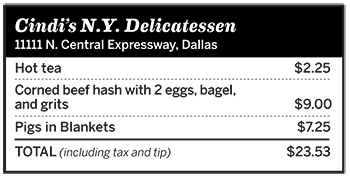 The Brumits’ children have grown up in the business as well. JoAnn and Lee have tried to instill in their sons, whom they expect to eventually run the business, the need to take care of their employees as well as the bottom line.

As we wrap up our meal, Brumit gets to talking about the next book she’d like to write. She’s long been a woman in a field—manufacturing—that’s dominated by men. She says she’s learned to turn her gender into a competitive advantage, getting a call back or securing an appointment where a man might fail. She wants to advise other women on how to do the same.

For example? “When you walk into a room, you want to turn a head,” she says. “You want to dress to be remembered. Don’t dress like a man.”

We exit the restaurant’s front door, and she remarks again on how often she attends industry meetings or trade shows and finds herself the only female there.

“That must make you the most popular person in the room,” I say.

“I get lots of attention,” she replies with a smile. “They’re all curious. They all want to know, ‘How did you get here?’”