According to the late management guru Peter Drucker, being the chief executive officer of a hospital is one of the most difficult jobs in America. And with the unprecedented changes brought on by healthcare reform, the growing demand for service, a continuing squeeze on payments, and evolving technology, the job isn’t getting any easier.

D CEO recently gathered together the heads of five major Dallas-Fort Worth hospital systems to discuss the challenges they face—in an economic sector that comprises about 17 percent of the local economy. Combined, these top executives oversee nearly 70,000 North Texas employees.

In the following discussion they address the impact of the Affordable Care Act, the importance of workplace wellness programs, emerging changes in healthcare delivery, and next month’s presidential election.

Although the five of you seem to be bucking the trend, the average tenure for a hospital CEO is about four years. What makes this job so challenging?
DOUGLAS HAWTHORNE: It’s the diversity of the role. It’s really all about the variety of relationships we deal with every day.
DANIEL PODOLSKY: Part of it is the inherent complexity of healthcare, and how you are going to manage that complexity with an unprecedented dimension of uncertainty about the future.
ROBERT EARLEY: Healthcare touches everyone. You have many constituents who are concerned and, like Doug said, you have to respond to your different constituents, because healthcare is so personal and it has a huge impact on everyday life. Some view it as a right. Others view it as privilege. That’s what makes it so complex.
STEPHEN MANSFIELD: It’s really a lifestyle, not a job. You don’t have an off-on switch. You’re pretty much “on” all the time. If you aren’t careful, it can consume you. It’s also a great joy.
EARLEY: To Doug’s comment, there’s such a diversity of issues. I’ll have a 9 a.m. meeting where I’m debating about the thread count of bed sheets. Then I’ll go into the next meeting about how we advance neurosurgery. Along with the diversity, we deal with life-and-death issues that are compounded by money.

In what ways is healthcare changing, and how much impact do you think the Affordable Care Act has on that?
JOEL ALLISON: The Affordable Care Act is more about insurance reform than about healthcare delivery. We will create delivery models that give the right kind of care. It’s not going to be because the Affordable Care Act was passed.
PODOLSKY: When the future of the act was in limbo pending the Supreme Court ruling, we really took the view that much of what the future would look like was irrespective of what happened with that decision. We need to deliver value at a lower cost, one way or another. We’re trying to reinvent our systems so that you reward the most effective use of resources at a time when the model hasn’t yet changed and we still get paid on a piece-meal basis.
EARLEY: The [Affordable Care Act] and other initiatives are trying to get to a preventative healthcare model. Our challenge is we don’t live in a preventive care world. We’re trying to figure out how take on chronic diseases and obesity. But people are being bombarded by advertisements to eat unhealthy food. So I’m competing against that. I can’t think of another industry where you’re trying to work with a consumer base that doesn’t want to do anything that you’re trying to tell them to do.
HAWTHORNE: The real question with the Affordable Care Act is what that health insurance will really mean. Will it mean health insurance, or will it be a continuation of sickness insurance? Real reform happens in our communities, not Washington or Austin. That’s where employers, payers, physicians, and healthcare systems work collaboratively to find solutions on how we deliver health services.
MANSFIELD: I agree with Doug. It’s a local proposition. It’s local employers, insurers, and providers working together to reform healthcare. But I do think we’ve got more to work with under the Affordable Care Act than we had in the past. For example, being able to align with our physicians in ways we could not [before]. It gives us a chance to change healthcare in a way that will be better for consumers and better value.
ALLISON: There are two important things missing in the Affordable Care Act. First, it didn’t address access. It talked about getting more people covered, but it didn’t talk about access. We have a shortage of physicians. We have people on Medicaid and Medicare who can’t get a physician. Second, as Robert mentioned, it does not address patient engagement. How do you get the individual accountable and responsible for his or her own healthcare? The opportunity is to do prevention and wellness. 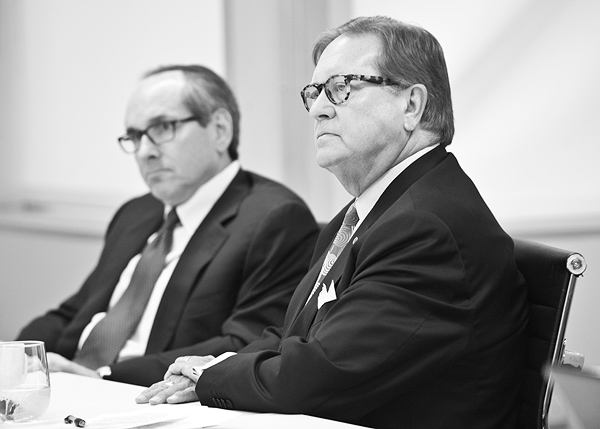 Daniel Podolsky, left, and Douglas Hawthorne say their hospital wellness programs have shown positive results. DFW employers lose about $17 billion annually because of worker health problems, Hawthorne says.
To follow up on that point, hospitals and healthcare companies often have the most sophisticated and aggressive employee wellness programs, because they understand their value and they want to be seen as health-promoting companies. For example, Methodist is giving up to $1,700 on premium discounts based on health risk assessments. Baylor no longer hires smokers. Do you recommend these kinds of aggressive measures to other CEOs trying to control healthcare costs?
MANSFIELD: Absolutely. In the employer setting, you have the tools to provide employees incentives to take an interest in their health and disincentives if they fail to. Methodist is using both of those and having phenomenal results with our medical home project that we offer to about 20 percent of our employees who we felt would benefit from that the most. If employers will really engage with their employees in a meaningful way, we can make a difference. This battle will be won by making small steps forward with small groups, and employers can play a huge rule in that.
PODOLSKY: We’ve had a real gratifying impact of wellness programs at UT Southwestern. We have a worksite weight control program that includes healthier eating, how to jump-start physical activity and motivational reinforcement. One of the greatest drivers of healthcare costs worldwide, and especially in Texas, is the growing obesity epidemic.
HAWTHORNE: We need to be an example of good health. “Be Healthy THR” is 10 years old and we’ve seen remarkable results. Normally, healthcare workers are not the best at taking care of themselves despite where they work. Dallas-Fort Worth employers lose about $17 billion in productivity costs annually because of health issues.
ALLISON: For Baylor, we believe that we are role models. We have a very robust wellness program called “Thrive.” We’ve eliminated trans fats in the cafeteria and offer many healthy food items. We’ve taken sugared drinks out of the vending machines. And most aggressively, we no longer hire nicotine users. There are four basic things for good health: Don’t smoke. Eat a moderate, healthy diet. Exercise moderately, and manage your stress. That’s what we’ve built our program around. And we have 16,000 employees and 20,000 dependents participating in that. As incentives, they receive cash and premium reduction. Since we’ve had this program, we’ve lost 24 tons through our weight control program, which is important, because of Type 2 diabetes and chronic diseases. And we’ve seen more employers offering this as well. I still believe the key is to lowering healthcare cost is prevention and wellness.

According to Thrive’s director, people in that program have annual healthcare cost increases of 1.1 percent, compared 9.9 percent for those who do not participate. Is everyone seeing a similar ROI from your wellness programs?
HAWTHORNE: Absolutely. It’s a more productive work force. Well-being is more than just personal health. It’s the ability to deal with stress and to take on added responsibility. So absolutely, when we look at our cost of providing health insurance for our employees, it continues to stabilize costs. That’s a good sign of what these programs can do.
EARLEY: At JPS, we’re going to open up an employee clinic. There’s another aspect of managing chronic disease and becoming healthier. I really want the employees to use the system they work for so they understand what that patient faces when they come in the front door. Maybe I have a 30-year smoker telling a patient that they have to quit smoking. What’s it like to kick that nicotine habit? I want the caregiver to understand what we’re asking our patients to do. I think that empathy and, in some cases, sympathy, results in far better healthcare delivery if we know exactly what that feels like to hear those words or get on that program or lose that weight.
ALLISON: In fiscal year 2012 that ended June 30, every dollar we invested in our wellness program had a $3.40 return. We expect that to continue to go up. We spend $152 million a year on our employees’ healthcare. That’s $10,330 per person. Helping them manage their health and lowering costs has been a very, very positive for us.
PODOLSKY: Many of these wellness programs build cohesiveness among the employees and enhances their connection to the organization. They see that the organization is concerned about their welfare and extending itself to provide benefits. That translates into reduced staff turnover. That’s another benefit to the organization doing well by doing good.
HAWTHORNE: Healthier people are happier people.
ALLISON: We would like to get the Congressional Budget Office to score wellness and prevention as a savings. Right now, they still score it as a cost. That makes no sense because I truly believe it will be a savings

An accountable care organization is a network of healthcare providers that accepts the responsibility of the cost of coordination and accepts patients. The goal is to improve quality and access while reducing cost. ACOs have been created to treat Medicare patients. However, it seems like a promising model for commercial insurance plans and large self-insured employers as well. Can this model help companies control their healthcare costs?
MANSFIELD: Absolutely. You’re managing the patient expediently, but also less costly. I think you will see an increasing number of commercial insurers interested in ACO models, and I agree that large self-insured employers can benefit from that as well.
ALLISON: We created our vision for 2015 before the Affordable Care Act was passed and in that was to create a model for managing care. We created Baylor Quality Alliance. That’s our response to the ACO. That’s a network of physicians and hospitals clinically integrated to manage care. We’re self-insured like everyone else around the table, and we’re putting our employees into that model Jan. 1, 2013. We believe that’s the future, and what better way to start than with our own employees and their dependents.
HAWTHORNE: Collaboration will be the key here. There’s no one system that’s going to be able to do it all. There are a couple in this room that are working with THR to look at the community’s well-being and the full continuum of health. THR is one of the 32 Pioneer ACO projects to treat a segment of the Medicare population to see if the model makes a difference. We believe we will have an opportunity to take to that model to commercial payers to improve their outcomes. 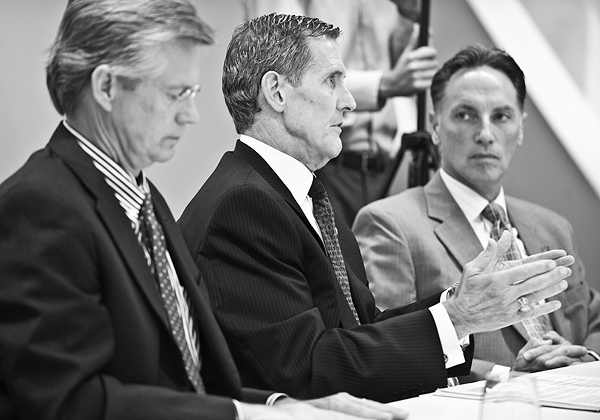