In reporting on commercial real estate in North Texas for the past dozen years or so, I’ve seen some impressive projects—Dallas developers are among the most talented in the nation. But the first time I truly felt “wowed” was when I drove through the gates of Old Parkland a few months back.

I knew, of course, that Crow Holdings had renovated the historic Old Parkland hospital at Maple and Oak Lawn avenues and moved its company to the 60,000-square-foot facility in 2008. I knew that Chairman and CEO Harlan Crow had also renovated a former nurses quarters on the site and added a couple of smaller office buildings. I had written about TRT Holdings’ decision in January to build a 164,000-square-foot headquarters at Old Parkland, with plans to relocate its operations from Irving late next summer.
But interviewing sources and writing about the project is one thing; experiencing it up close is another.

Behind the gates of Old Parkland, Jeffersonian-style office buildings are surrounded by lushly landscaped lawns featuring large, shady trees and provocative sculptures, many by French realist Rodin. Inside, intricately laid wood floors are themselves works of arts. Fine paintings, some from the 18th century, adorn nearly every wall. Artifacts—everything from Old Parkland memorabilia to death masks to a piece of a curtain Abraham Lincoln is believed to have grabbed and torn after being shot at Ford’s Theatre in Washington, D.C., in 1865—are tucked into every nook and cranny. 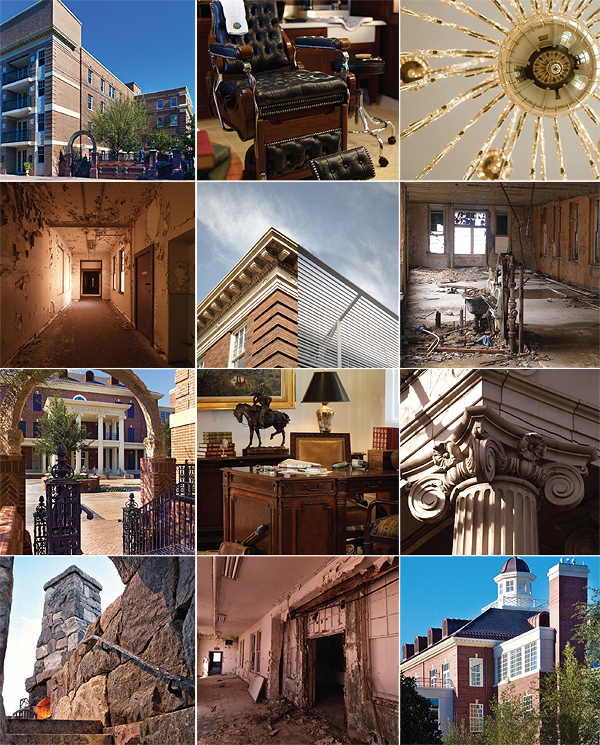 Various before-and-after photos show the remarkable transformation of Old Parkland. Included are shots of the renovated Nurses Quarters and tavern terrace (top left), an on-site barber shop (top center), and the Adirondack-style fireplace (bottom left). A few of the large rocks open to reveal hidden storage areas for fireplace tools. photography courtesy of Old Parkland
“Its transformation is nothing short of incredible,” says CBRE tenant representative Phil Puckett. “I literally know of nothing that would compare to it. It just blows me away—it’s like a Smithsonian Institute in Dallas.”

“We don’t have a sign that says ‘For Lease’ out front,” Crow concedes. “There are some companies we’d love to have here; there are others that, for one reason or another, just aren’t a good fit. We have a couple of charitable organizations, some family offices, hedge funds, private equity groups, and a few political tenants. The whole idea is that these are people who want to have lunch together; there’s a lot of collegiality that happens by proximity.” 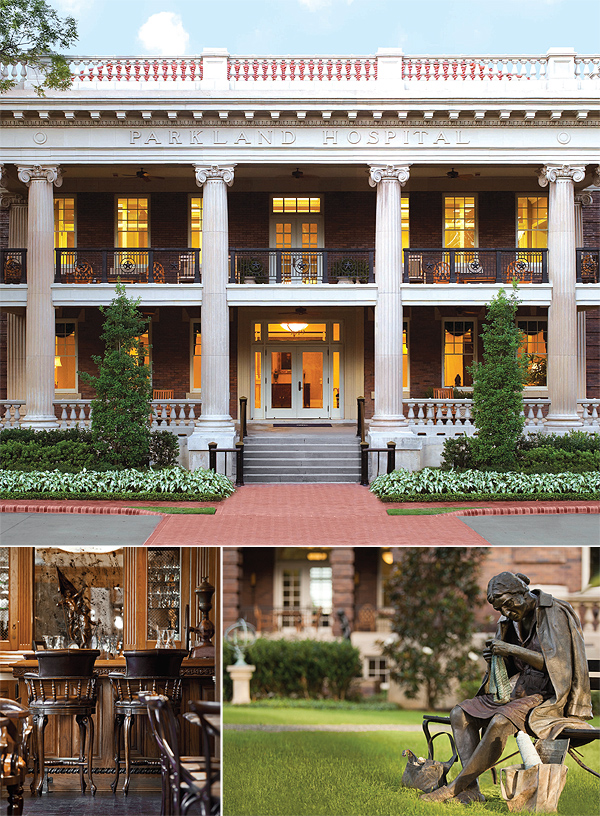 The former Parkland Hospital, a historical landmark built in 1913, was preserved and greatly enhanced. It now houses the corporate headquarters of Crow Holdings. (Bottom left) A private “watering hole” for tenants and their guests opens up every afternoon at 4 o’clock. Although they’re not shown in this photo, the tavern’s windows are adorned with stained-glass logos of select tenant alma maters. (Bottom right) “Getting Involved” by J. Seward Johnson is just one of many sculptures that dot Old Parkland’s grounds. photography courtesy of Old Parkland
Crow, 62, first became involved with Old Parkland in late 2006, when he partnered with Alliance Residential to acquire the project. Alliance was interested in building apartments on the 8-acre site. It had no use for the historic hospital structure; Crow thought it would make a nifty corporate headquarters.

In fairly short order, Crow made an offer to buy his partner out. “I didn’t think it was a good place for apartments,” he says. “I didn’t see that as the best use for the property. I had fallen deeply in love with the old buildings and the trees—and it didn’t take me long to figure out that the location was pretty damn good, too.”

The original Parkland Hospital was built in 1894. By 1913, that wooden structure was replaced with a modern brick building. Two wings were added in 1921, and a nurses dormitory was built in 1922. In the mid 1950s, Parkland Hospital moved to its existing site on Harry Hines Boulevard. The older hospital was used to treat psychiatric and tuberculosis patients until the mid-1970s. In 1996, Dallas County acquired the then-vacant complex with plans for redevelopment—but those plans never materialized. Nine years later, the county opened up the opportunity to outside investors. Alliance and Crow came in with a winning bid of $16.5 million and closed on the deal in late 2006.

The exterior of the old hospital building had held up well; the inside, however, was in bad shape. “It had sat empty for a long time, and was derelict,” Crow says. “The walls and ceilings were crumbling; there was graffiti, water all over the floors, and signs of vagrants about. The first time I walked through here with my wife, she was pretty nervous.” 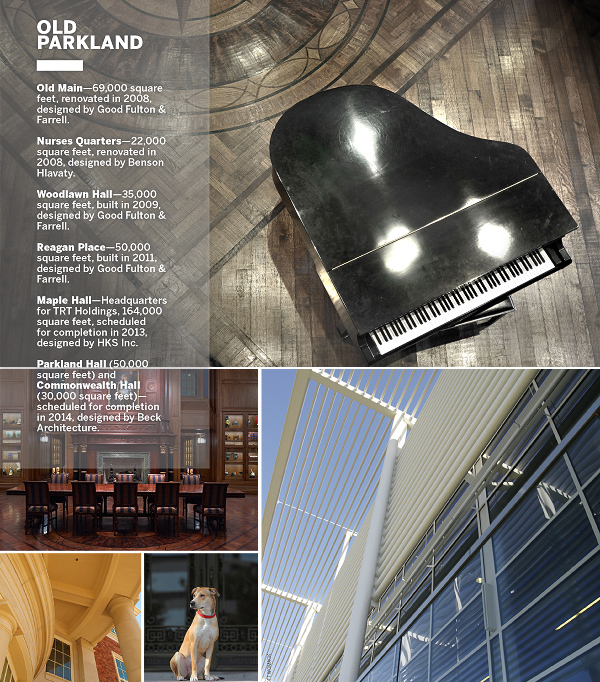 (Clockwise, from top left) A piano sits atop the ornate floors of The Pecan Room; on the new west (back) side of “Old Main,” an expansive wall of windows sits in stark juxtaposition to the rest of the park; although she’s a she, “Boz,” the campus dog, was named after the late Dallas physician George M. Boswell Jr.; exterior details of Reagan Place, which was added in 2011; inside The Pecan Room, where glassed-in cabinets showcase historic fireman and military helmets and other artifacts. Behind the fireplace is a small study whose floors bear the autographs of famous Old Parkland visitors, including Clarence Thomas and Mitt Romney—who was reticent to sign until he saw that George W. Bush had done so. photography: dog by Scott Womack; all others courtesy of Old Parkland
From the start, Crow’s vision was to create an Ivy League campus-style corporate park. The property could accommodate and was zoned for tall office towers, but Crow felt it needed “low buildings, low density, and a lot of trees.”

Dallas architecture firm Good Fulton & Farrell was tapped to handle the historical renovation. According to Larry Good, principal, decisions relating to the project were “not always governed by short-term economic issues.” Putting parking below grade and developing small buildings would be an expensive proposition. Good told Crow, “We’re going to have to rent these for $55 a foot to make this work.” He replied, “Larry, we’re going to surround ourselves with like-minded companies, with interesting people we enjoy being around, who … don’t
mind paying a little more because it’s worth it to have the kind of environment we want.”

A portion of the second floor was removed in the lobby and other areas of the the former hospital to create more dramatic, higher ceilings. The bulk of the first floor houses a huge “bullpen” for Crow Holdings brokers and other employees—in keeping with the open-office style made famous by Crow’s father, Dallas real estate icon Trammell Crow.

The former nurses dormitory houses The Pecan Room, a stately dining facility for tenants and their guests, with food catered by Parigi (every day except Thursday, when other favorites like Goff’s and Bubba’s bring in the chow). There’s also a private “watering hole” that opens to a shaded terrace—a popular afternoon amenity.

Access to the campus was greatly enhanced in 2008, when Oak Lawn exit ramps were added to the Dallas North Tollway. “We were so lucky,” Crow says. “We started building this and then the tollroad exits came in. People would say, ‘Harlan, you’re so smart.’ But we didn’t know anything about it. What’s that saying? ‘Blind pigs find nuts.’”

Crow decided to open up the campus to other tenants by developing speculative space. The 35,000-square-foot Woodlawn Hall was built in 2009; the 50,000-square-foot Reagan Place came in 2011. 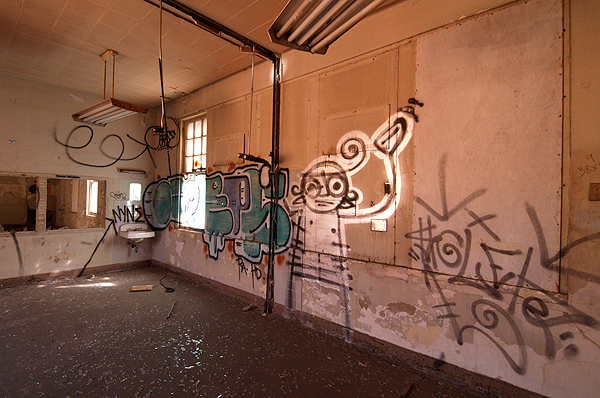 Before the renovation, walls in the long-vacant hospital were covered in graffiti. photography courtesy of Old Parkland
Along with the new headquarters for TRT Holdings (the parent of Omni Hotels and Gold’s Gym), Crow Holdings has just launched an expansion that will add three buildings totaling 110,000 square feet on the project’s west side. Parkland Hall—modeled after the Thomas Jefferson-designed rotunda at the University of Virginia—will total about 50,000 square feet. Commonwealth Hall will total about 30,000 square feet, as will a third, yet-to-be-named building, which will be added after the first two fill up.

Crow says he has a couple of “handshake deals” for a portion of the new space, and isn’t worried about leasing the remainder. The smaller tenants Old Parkland attracts—the average lease size is 3,000 to 5,000 square feet—aren’t the type to rent space more than six months to a year in advance. (The new buildings will be ready for occupancy in about 18 months.)

CNL Commercial, led by former Trammell Crow Co. exec Jimmy Grisham, manages the Old Parkland campus. But leasing is handled in-house. Rents are “in the $40s” per square foot, Crow says. “The finishes in our buildings are more expensive, plus all of the amenities—it’s a different package. We view it a little bit as a club.”

Views from the expansive windows on the western side of the Crow Holdings headquarters, known now as “Old Main,” overlook the Dallas Market Center, Anatole hotel, and InfoMart, landmark projects developed by Trammell Crow. With Old Parkland, his son is hoping that he has created a landmark of his own.

“When I was younger, I was lucky enough to have a lead role in building four downtown office towers, and I felt that, professionally, they were the most important thing I had done in my life,” Crow says. “Today, I feel that Old Parkland is more important. We’re building something special here—something that will be a valuable asset for the city for a very long time.

“Our financial returns are ridiculously bad on this, but I don’t care,” he says. “I’m at the stage of my life where what I’m doing is kind of a legacy. Hopefully, the economics will eventually work, but I care much more about what we’re building than I do about the economics. I don’t want to say it’s my swan song, but Old Parkland is a very big deal to me.”