Hall of famer Ryan, who’s been CEO of the Rangers since 2011, admits he was thoroughly surprised by the honor.

But those who know him well were not.

The two met during Ryan’s final three seasons with the Houston Astros after Matwick was hired as the team’s director of media relations. At the time, Matwick was a youthful PR flak new to MLB. The seasoned Ryan had already thrown five no-hitters and set a strikeout record. The two would later work together again after Ryan was named president of the Rangers in 2008.

“It was a tremendous opportunity for me, as a young PR person, to be around someone like Nolan,” Matwick says. “He was such a great competitor. It was fascinating to see his conditioning regimen. I think that leads back to his work ethic, not only as a player but as a businessperson.”

Ryan says his philosophy is to work hard. It’s something he came by at a young age. The youngest of six children, he was born in Refugio and grew up in the small Texas town of Alvin. To help his parents put his older sisters through college, Ryan and his father delivered 1,500 Houston Post newspapers every morning from the time Ryan was in first grade until he graduated from high school. They started their route at 1 a.m. each morning.

“It’s kind of like a dairy,” Ryan recalls of the experience of rising before the sun each day. Because of the paper route, the family didn’t take vacations. When it’s the baseball off-season, or when he’s at his cattle ranch, the gene in Ryan to get up early kicks back in.

When Ryan is asked who he admires in business, he doesn’t spout the names of professional sports franchise owners. He admits seeing very little of Dallas Mavericks owner Mark Cuban or Dallas Cowboys owner Jerry Jones, even though Cowboys Stadium is across the road from the Rangers’ ballpark in Arlington.

Ryan knows Roger Staubach, the famous Dallas Cowboys quarterback who’s had his own successful business career after leaving the playing field. The two see each other on occasion at the ballpark, and Ryan has made appearances for the commercial real estate business Staubach founded. (Staubach’s company was sold in 2008 to Jones Lang LaSalle, where Staubach serves as director and executive chair of the Americas Region.)

The person Ryan names as the businessman he admires likely flies under the radar for many in DFW: Barry Andrews, founder and CEO of Dallas based beer distributor Andrews Distributing.

“I respect the way he treats his employees and his customers, and I think we mirror that,” Ryan says of Andrews, who’s managed a beer distributorship for more than 30 years. The two have never done business together but are steadfast friends.

Andrews says he met Ryan more than 20 years ago while working on a fundraiser in his hometown of Corpus Christi to raise money to build baseball fields at Texas A&M-Kingsville. People paid to go hunting on the King Ranch with Ryan and other celebrities. From that initial meeting, Andrews says he got to know Ryan’s family, including the children and Ryan’s wife, Ruth. Now the two families regularly socialize.

“We talk about business a lot,” Andrews says.“He’s always had a passing interest in our business because of our business model and the culture in our company. There is certainly no magic potion. The culture [at Andrews Distributing] is centered around treating people the way that you want to be treated yourself. The Golden Rule, which sounds very simple.”

The beer distributor also promotes getting involved in the communities where it does business, Andrews says. Community involvement is something Andrews says he admires about the Texas Rangers and Ryan’s minor league baseball clubs in Corpus Christi and Round Rock, which do the same.

But there is a side to Nolan Ryan the general public rarely sees, although former teammates and current Texas Rangers employees agree that it is alive and well.

The guy is a practical joker.

Just ask Kellie Fischer, Texas Rangers CFO. She’s been in an ongoing practical joke feud with Ryan since 2008 to see who can best the other. 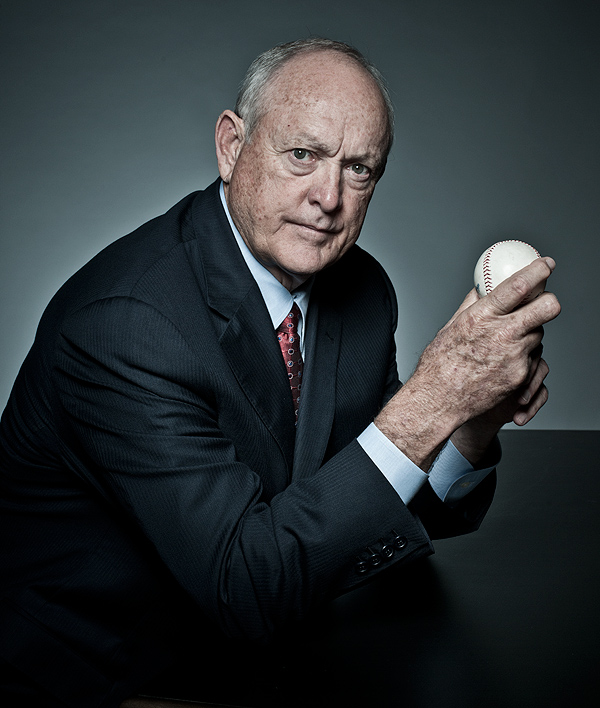 Ryan was disappointed when the Rangers blew their American League West lead, but he's tried to understand the collapse and move on. photography by Elizabeth Lavin
photography by Elizabeth Lavin
As we begin to talk, she pauses to close her office door and quips: “It’s easier to talk bad about Nolan with my door shut.” Fischer, who’s been with the Rangers for 14 years and the CFO since 2005, describes her initial meeting with Ryan as “phenomenal.”

“He brought his whole family with him, which I thought said a lot to bring your whole family on your first day on the job,” she says. “Everyone in his family, including Nolan, had taken time to read the bios and understand the job descriptions of the entire executive team. … He introduced himself to me, which made an unbelievable impression because he needs no introduction.”

She describes Ryan as a strong, caring leader who strives to make the ballclub feel like a family, despite its considerable size: some 350 full-time employees and about 1,200 seasonal employees during the baseball season.

It started with Fischer’s MLB identifi cation card. They are “offi cial,” issued from the league and difficult to replace should one have to seek a new one. Thus, Fischer was shocked and appalled to discover that someone had used a magic marker to color in some of her teeth and even add pimples to her face. She had made the mistake of not being in her office when her credentials were delivered.

“I was so shocked. … Those kind of jokes just didn’t happen. I started asking around, and finally someone ’fessed up that it was Nolan.”

Rather than striking back with something inexpensive and effortless—like taking a marker and coloring in a photo—she went to an inordinate expense and had two dozen “I [heart] Ventura” T-shirts printed. “I somehow managed to coach the entire executive team, including Jon Daniels, Thad Levine, Rob [Matwick]… to wear them,” Fischer says.

The group, along with a cameraman, waited in Ryan’s office and donned the shirts when they got word from security that Ryan was on his way up. “He walked in the door, on the phone with someone, busy, doing business, looks at all of us in the room wearing these ‘I [heart] Ventura’ T-shirts and he looks at me and he’s like, ‘You! You are the one behind this!’ By the end of the whole episode, I ended up in a headlock. I’m one of the few people who happens to have a picture of me in a headlock with Nolan. Ventura is not alone. I charged the mound, so to speak.”

Fischer recounts another practical joke where she hijacked Ryan’s email (she oversees IT) and crafted an email in Ryan’s exact cadence and style. But at the end of the email, “Nolan” told his employees that if he hadn’t become a great baseball player he would have been an actor, and he encouraged the entire office to go look at his one scene in the soap opera Ryan’s Hope. (You can find this, too, on YouTube. Warning: It’s painful to watch.)

Fischer admits she’s never seen Ryan raise his voice, and Matwick calls him “low key.” Ryan admits he’s pretty laid-back and “not real excitable.” He was disappointed when the Rangers blew their American League West lead and then collapsed in the wild-card game against the Baltimore Orioles this season. But he didn’t rant or rave.

“You have to move on and understand that at times things happen that are out of your control,” he says. “You prepare for the next season and try to learn from whatever experience you came from.”

He also says he empowers his executive staff and approaches the C-suite like he did the pitcher’s mound: “I’ve taken the same approach in my business ventures that I did in my [playing] career. I try to be as well-prepared as I possibly could be.” Ryan says he’s also “a believer in hiring good people and allowing them to do their jobs. It’s pretty simple and pretty basic.”

When Ryan came into the C-suite he says he knew he lacked experience, and it took him about a year and a half to became comfortable. During that time, he says he relied on Fischer’s expertise along with others like Matwick and John Blake, executive vice president of communications. “I really respected their opinions and asked them at times their thoughts and listened to their recommendations and suggestions,” he says.

It’s been a two-way street, Fischer says. She’s learned a lot from Ryan’s knowledge and wisdom, which he brings from his baseball experience as well as from his other business ventures that range from ranching to banking. “That Ventura video is so prominent in everyone’s mind,” Fischer says. “But it is so not who he is.”