Dallas-Fort Worth is inching closer to its goal of achieving the biomedical star status of a San Francisco or Boston. Consider Reata Pharmaceuticals, an Irving biotech startup born under the umbrella of the University of Texas. Reata is entering phase three testing (the final stage before FDA review) for bardoxolene, a drug that promises a breakthrough in treating advanced kidney disease. The company has already received an upfront payment of $450 million from pharmaceutical giant Abbott Laboratories for licensing rights to bardoxolene in most markets outside the United States. It’s also partnering with Kyowa Hakko Kirin to develop the drug in Japan and other Asian markets.

“If we’re successful, it will have a real impact,” says Warren Huff, founder and CEO of Reata.

The drug is an anti-inflammatory that works by activating a regulator of antioxidant and detoxification enzymes. In kidney disease, that translates to enhancing that organ’s functioning, and potentially keeping advanced stage kidney failure patients from progressing to dialysis.

“The cost of dialysis and related treatment is about 25 percent of the Medicare budget, and of course a very difficult lifestyle for the patients,” Huff says. “If we’re right, it will be a huge benefit, and that’s why companies like Abbott are so interested.”

Another big score for North Texas: med fusion, a joint venture between Baylor Health Care System, US Oncology, Texas Oncology, and Pathologiests Biomedical Laboratories, which last year opened a sizable laboratory testing and molecular diagnostics facility in Lewisville. It currently employs 220 and occupies about 130,000 square feet. CEO Keith Laughman expects employment to hit 900 by the end of 2014; expansion plans call for up to 500,000 square feet of space. “The logistics here are terrific,” Laughman says.

Dennis Stone, vice president for technology development at UT Southwestern, says DFW’s quest for preeminence in the field is close to becoming a reality. “I’m optimistic,” he says. “I think we’re at or approaching a tipping point.”

UT Southwestern itself is seeing momentum; the first of four planned buildings at its BioCenter for emerging and mature companies should be half-filled in 2011, Stone says. 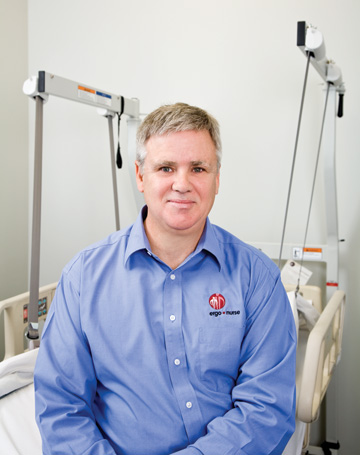 But the classic biotech side of the broad industry has been slow to develop here, with technology often getting licensed outside the area and companies like Dallas-based Eliance Biotechnology Inc. being acquired by out-of-market concerns.

Dallas-Fort Worth has been more successful in leveraging its computer, software, and semiconductor engineering expertise to develop biomedical device companies like OraMetrix, a maker of sophisticated products for orthodontics, and HealthPoints, which provides patient monitoring.

In the biomedical device area, “We do have some pretty large established companies that continue to grow and innovate, and we continue to have a number of the earlier stage companies,” says Larry Calton, executive director of the North Texas Enterprise Center, an incubator located in Frisco.

One company on the verge of breaking into profitability in NTEC’s incubator is ErgoNurse, which makes a “no-lift” device that helps nurses turn patients in bed.

It was the inspiration of Elizabeth White, a nurse who injured her back and had an “aha” moment, says Dave Stiles, co-founder, president, and CEO.

The company is banking on hospitals wanting to save medical costs for nursing personnel, even while they are under the gun to prevent bedsores by moving patients more frequently. Medicare no longer reimburses for bedsores incurred in hospitals.

“We finished our fund-raising round in June of last year, and it looks like we’ll end up turning a small profit in 2010,” Stiles says, adding that the company is working on a second contract with Kaiser Permanente.

Stiles, who hails from Los Angeles, and ErgoNurse co-founder and chief operating officer White, who’s from Utah, selected Dallas-Fort Worth for their startup in part because of Stiles’ family, but also because of its market location and business climate, Stiles says.

“When no one was raising money for anything, we went out and found investors here in DFW,” Stiles says.

Stone at UT Southwestern says North Texas biomedical companies are getting interest from nontraditional sources. “If you’re going for classic venture capital, it’s extremely difficult, but a growing number of very high net worth individuals are willing to invest in this field.”

Huff was a senior partner at Dallas law firm Johnson & Gibbs when investors in a Boston biotech startup asked him to take it over in 1993. “I made kind of a preposterous career move,” Huff says. “It worked pretty well; I learned a lot.”

When he decided to move back to Dallas in 2001 for family reasons, those investors introduced him to Stone at UT Southwestern. He took over as CEO of Reata in 2002.

“Dennis, the UT system, and UT Southwestern have all been very anxious to have the fantastic science done here translated into companies. Even today, [technologies developed locally] get licensed out to the West Coast. It’s a big, big problem for Texas,” Huff says.

Stone, who serves on Reata’s board, has worked closely on the bardoxolene project since 2002. “We spent two years and $1 million internally advancing those technologies,” he says.

With long development times and heavy upfront investment, pharmaceutical breakthroughs need “a risk-taking culture,” Huff says. The payoff, of course, can be huge—not only for the company involved, but for the entire state.

“I grew up in Dallas in the 1950s, and there was a sleepy little company then called Texas Instruments,” Stone says. “Texas at large needs something like that in biotech. We need a very visible success.”

There are hundreds of health-tech companies in North Texas, including multinationals Medtronic and Orthofix. Additionally, several major corporations are based in DFW, including:

Alcon Laboratories, based in Fort Worth. A subsidiary of Swiss multinational Novartis, Alcon makes eye care products, including replacement lenses for cataract surgery. It generated $6.5 billion in revenue in 2009.

Essilor USA, based in Farmers Branch. It’s the leading manufacturer of optical lenses in the United States and operates one of the country’s largest wholesale laboratories. It has 8,500 employees in North America.

Kimberly-Clark, based in Irving. The $119 billion behemoth has a huge health care division and holds top market share positions in sectors such as infection control, surgical, pain management and digestive health products.