“It takes a lot of smarts to do what he’s done, and some guts, too,” says Jackson. “These were very large developments. It’s hard to drive around West Plano and not see his footprint somewhere.”

Ted Wilson, a principal with Residential Strategies Inc., agrees. Shaddock Development “has been one of the top developers throughout Plano,” he says. “They have a reputation of doing high-quality developments, and they’ve been able to recruit the best builders in the market to come to their neighborhoods. I would consider [the Shaddocks] to be one of the founding families of the Plano area. Certainly their reputation precedes them in the market.” 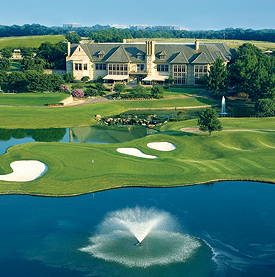 Shaddock has developed subdivisions around Stonebriar Country Club. photography courtesy of ClubCorp
At the same time that Bill Shaddock was sizing up and succeeding with development deals, he began doing title work as a fee attorney, as a sideline business. He answered his own phone and waited a year to hire his first part-time employee. When she asked to go full-time, he reluctantly said no. “Hiring my first employee felt like the biggest decision I’d ever made in my life,” Shaddock says. “You’re happy you only have to go through that once. Anyway, it started working a little bit and we were making money.”

Shaddock’s mortgage company, which eventually would encounter higher seas than he ever imagined, started in a similar fashion.

“I never have wanted to go out and buy something,” he says during an interview at the title-company headquarters. “I want to start it myself and figure it out. No loans. No capital. No venture money.” He wasn’t thinking big when he opened a mortgage brokerage serving the North Dallas/West Plano area, “just to do it,” in 1993.

In the early 2000s the company transitioned from a mortgage-brokerage platform, arranging loans from other providers, to a mortgage-banking platform, where it originates the loans and eventually sells them to secondary lenders such as Fannie Mae.

Operating against a backdrop of falling interest rates, which fuel refinancings, and a Texas residential real estate market characterized by steady growth, Shaddock compared the business through many of those years to “being in the roofing business after a hailstorm.”

Then came the capital-crisis tornado of 2008.

Willow Bend, which had grown to nine offices in Texas’ largest cities, had been using a line of credit from its so-called warehouse lender. That is the bank—in Willow Bend’s case, Alabama-based Regions Financial Corp.—that extends credit for loans that typically last from the time of origination to when the loans are sold either to a secondary lender or to Wall Street, where they’re packaged into securities.

Regions, like many other banks, abruptly exited the business, informing Shaddock that it would fund his loans only for another week and half, and that his entire line of credit needed to be cleared in 30 days.

In place of his $40 million line with Regions, Shaddock says, Willow Bend cobbled together smaller lines from a variety of local lenders totaling “$8, $10, $15 million. We were having to turn the money with the velocity of Lucy at the chocolate factory,” he says. “We were
working until three in the morning to turn our loans and keep the business going.”

Even today, “it’s not back to normal,” Shaddock says. “We’re still experiencing a credit crisis in real estate.”

Craig Schrank, Willow Bend’s executive vice president, says the credit crunch hit all of Shaddocks’ businesses to some degree. “It was all coming down at one time,” Schrank says. Shaddock “had to roll his sleeves up and he took a financial hit to sustain the mortgage company’s operations and reorganize it. The fact that he’s still here says a lot.”

The mere act of staying open in an industry where so many competitors have vanished indeed has been the upside, Schrank says. Willow Bend Mortgage continues to operate nine offices in Texas—from Dallas to McAllen—plus one in Arkansas. “We’ve been able to acquire some good people from all the fallout,” Schrank says. “We’ve had a decent year to 18 months of growth because of it.”

A BUSINESS FAMILY
People and relationships, Shaddock believes, are the keys to business success. He says his title company may be his best example, given that fees for title insurance are set by the state, so competition hinges not on pricing but on service, contacts, associations, and salesmanship. As Shaddock sees it, people skills allow him to stand up to much larger national companies that compete with advertising and, sometimes, crushing force.

Capital Title, which currently operates 45 offices, is a title insurance agency that sells policies from a variety of national underwriters, some of which also compete at the agency level. One of Shaddock’s underwriters recently told him that it would cease underwriting title policies over $25 million, he says.

“They’re thinking, `We don’t underwrite their big policies; they’re out of that business,’” Shaddock says. “That’s the way it’s always been.

“When I was growing up in Orange, there was a dairy there,” he remembers. “The larger dairy in Beaumont put them out of business. People ran jewelry stores and things like that until Wal-Mart came to town, put them out of business, and hired them to run their jewelry counter at $5 an hour. When you’re a less-than-well-financed independent, you have issues with bigger, better-financed companies and, if you don’t fight back, they will kick your behind.”

His counter-punch was to move forcefully into one of his competitor’s markets, Austin, and hire some of its top talent, Shaddock says. He ended up with enough of the rival’s people for five offices, and valuable business relationships came with them. How did he do it?

“I tell them about our company’s values and ideals, and I ask certain questions, like, `Do you know the CEO of your company?’ Typically they don’t know him. I ask them if they called him, would he take your call? Would he care if you were ill?”

“Then I ask what Worldwide Title Co. is doing to help them build their business,” Shaddock goes on. ”I then tell them how I’m going to help them build business. I tell them, `I’m going to be your biggest supporter, and I’ll give you the freedom to accomplish your goals.’ I give them my cell number. You get the opportunity to be a significant person in this organization.”

It’s been called servant leadership, Shaddock says, and it comes by valuing people and leading by example. “We’re a business family as well as a family business,” he says. With Kim, his wife of 29 years, he has three children, two who now work in the business as well.

On a recent Friday afternoon, in fact, as the clock ticked toward 6 p.m., everyone still working at the Capital Title headquarters offices was named Shaddock: Bill and sons William and Andrew.

Of course, he learned everything he needed to learn about the work ethic in Orange, where it was a big deal to be an outdoorsman who caught a lot of fish.

“One guy I knew, Mark White, had a reputation of being a very expert fisherman, so I went fishing with him to find out what his technique was,” Shaddock says. “It turned out that while we were taking a break or eating lunch, he was fishing with one hand and eating his sandwich with the other. He was throwing twice as much bait as we were.

“So, persistence counts. You have to throw the bait out there.”