When actor Nicolas Cage decided to unload most of his vast comic book collection in 2002, he used Heritage Auctions in Dallas to execute the $1.68 million sale.

In Orlando last year, a 1913 U.S. Liberty head nickel previously owned by Egypt’s King Farouk and before that, Los Angeles Lakers owner Jerry Buss (who sold it years earlier for a paltry $200,000), was sold at a Heritage auction for $3.7 million to an East Coast collector. 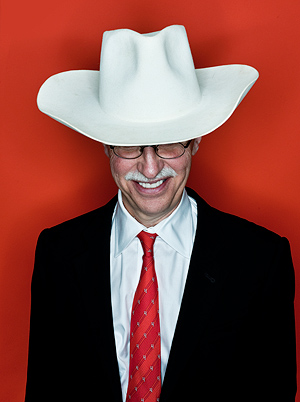 “What we do is bring in collections, catalog them, photograph them, sell them, and guarantee everything so the risk factor is essentially eliminated.” Steve Ivy, CEO photography by Elizabeth Lavin
photography by Elizabeth Lavin
Heritage has made so many huge “sells” that when centerfielder Lenny Dykstra decided to cash in on his 1986 New York Mets World Series ring, the $56,763 final bid did not crack Heritage’s top 1,000.

This is not eBay, despite the online giant’s enormous success. Says Steve Ivy, Heritage co-founder and CEO, “eBay is more pedestrian, more like a giant flea market. It’s all consumer-to-consumer, for the most part. What we do is bring in collections, catalog them, photograph them, sell them, and guarantee everything so the risk factor is essentially eliminated. We bring order to a much more chaotic market.”

Heritage is not a thorn in eBay’s side, but it is an ever-prickling nuisance to the world’s leading auction houses, Sotheby’s in London and Christie’s in New York. Based on reported revenue from the industry, Heritage bills itself as No. 3 in the world overall, and No. 1 in collectibles—items made in multiples that people collect in sets. Ivy says Heritage sales reached $700 million last year, while publicly owned Sotheby’s and privately held Christie’s are each in the $4.5 billion to $5 billion range.

“It’s only been the last five years that we’ve been what I’d semi-call going head-to-head with them,” Ivy says of the Big Two. “They were just sort of outside my universe. I did think they didn’t do a very good job in what are typically referred to as collectibles, because those areas are so expert-driven, and they’ve never hired anybody and created an atmosphere where experts in so many fields could do well. They do well with art experts, but they don’t do well with collectible experts. That’s one of the reasons Heritage was able to prosper, somewhat at their expense.”

For years the top currency and coin house in the United States, Heritage has sold a number of coins for more than $1 million apiece—the most recent ($1.3 million) at an August coin auction in Chicago that brought in a total of $31.5 million. Last year, the company also became No. 1 in the world in sports memorabilia, with almost $13 million in sales. It does $30 million a year in comics and comic art alone. The house has sold $25 million in illustration and fine art just this year.

Though based in Dallas, the company under the Heritage umbrella includes offices on Park Avenue in New York and on Olympic Avenue in Beverly Hills. It most recently acquired the assets of Greg Martin Auctions in San Francisco, which deals in rare firearms. Smaller buying offices are located in Paris and Geneva, and another full-service branch is opening next year in Hong Kong. The company’s range of expertise, compared to other elite auction houses in the world, borders on flabbergasting.

Heritage has sold items from the moon (Apollo 11 astronaut Buzz Aldrin’s slide rule and handwritten notes he carried onto the moon’s surface) and has sold far more Academy Awards Oscar statuettes than any auction house. In October, some 745 never-released items from the John Wayne Estate were scheduled to be sold in Los Angeles, including the True Grit eye patch, the hat Wayne wore in Rooster Cogburn and the shirt he wore in The Man Who Shot Liberty Valance.

Did someone say dinosaurs? The Natural History Auction on June 12 in the spacious Tower Building at Fair Park was a rock-solid gem. It was, according to those who dabble in such matters, the most notable auction of its kind in the world.

About 150 bidders attended, and countless thousands of other bidder-subscribers participated in Heritage’s streamed auction online at HA.com. More than 200 items—minerals and meteorites and fish scales and, yes, incredibly pieced-together dinosaurs—were sold to museums from all over the world and, as Heritage President Greg Rohan reflected, “to people with really big rooms.”

Heritage publicly posts all of its reserves but no longer announces many of its winning bidders, at the winners’ request, preventing other auction houses from recruiting its top customers. Thirty minutes into the natural history auction, a brilliant and pure Rhodochrosite mineral (4 inches wide, 2-3/4 inches high, 1-7/8 inches thick) went for $300,000. Heritage’s 19.5 percent buyer’s premium on that one item alone recouped what it cost to stage the event.

Shortly thereafter, an unnamed museum purchased “The Fighting Pair”—two 155 million-year-old dinosaurs pieced together in their life-like stances—for $2.75 million. The bones of the Allosaurus and Stegosaurus had been dug up in the prestigious Dana Quarry near Ten Sleep, Wyo., at the foothills of the Big Horn Mountains, and had been “articulated in their osteologically accurate positions,” as they say in the trade.

“A lot of dinosaurs just died in a big mud-hole,” explained quarry manager Henry Galiano. “I normally don’t auction items from my dinosaur quarry; it’s one of the largest collections of near-perfect Jurassic dinosaurs. But we needed money.”

The story behind Heritage is largely built around three self-confessed nerds who put their skulls together to jolt the auction world from its dinosaur days into the 21st Century. As Ivy explains, “The founders of Sotheby’s and Christie’s have been dead for over 300 years, so they have a lot more corporate types than we do. My partners and I all came up as collectors. We’re all seat-of-the-pants entrepreneurs.”

Back in the Leave It To Beaver 1950s, young Ivy borrowed $25 from his dad Robert, who was president of the Tarrant County Trial Lawyers Association. He used the money to buy a rare coin, then sold the coin for $50 that same week—back when $50 looked like a hundred bucks. He devoted that $50 to more coins, and on it went—the early stages of what Ivy assures is a genetic disorder known as obsessive compulsion.

“People ask me what I did before I got into this business,” Ivy says. “I tell them I was in the fifth grade.”

At the age of 12, he set up his first table at a coin show in Fort Worth. He went on to attend the University of Texas in 1967 as a business major, but dropped out in ’69 (“It was always coins first, school second”), and moved to Dallas. In his first year in a one-man office, Ivy says, he sold “a few hundred thousand dollars worth of coins,” working out of the LTV Tower on Pacific Avenue downtown. Already, many of the world’s major players in coin collecting knew his name.

Ivy moved into a 300-square-foot office in Metropolitan Mall when Dallas’ underground tunnel system “was like three buildings at the time,” later moved to Bryan Tower, then Greenville Avenue near Walnut Hill, a building at Akard and Woodall Rodgers Freeway, Highland Park Village, the West End Historic District and, finally, the company’s current office in an 18-story, glass-encased tower at 3500 Maple Avenue.

In Boston, meanwhile, Halperin shunned the playing fields of youth and got into collecting stamps at age 6. He added coins and comic books when he was 8. By 16, he had opened a stamp and coin shop and was obsessed with the business of collectibles. One of his admitted idols? Steve Ivy, the kid from North Texas. Ivy and Halperin kept running into each other at coin shows around the country.

“He was 19 and I was 16,” Halperin says. “He was one of my heroes. He was a famous coin dealer, and I was just getting started. We had a friendly rivalry. We almost always went out to dinner together at coin shows.”