Before the March 11 political tsunami that rolled in from Surprise, Ariz., and drowned Texas Rangers CEO Chuck Greenberg in Arlington, a savvy observer might have seen a few ripples of warning.

Next came the New York Yankees’ turn at bat. “I think Chuck is delusional,” Yankees boss Larry Levine proclaimed. “He has been in the league for a few minutes, and yet he thinks he knows what everyone is thinking.”

In between these small stories, Greenberg, 49, reportedly turned a few high-ranking Rangers baseball heads at the MLB Winter Meetings in Florida. Over the last few years, Rangers General Manager Jon Daniels had presided over a daily conclave of scouts, coaches, front office staffers, and just “baseball people” there. This last winter, though, Greenberg reportedly took the gavel and ran the meetings himself.

Then there was the matter of renegotiating Daniels’ contract as GM. Rangers President Nolan Ryan had publicly stated that this was an off-season priority. However, even after pitchers and catchers had been in spring-training camp for more than two weeks, Daniels still had no deal. Rumors spread that Greenberg had sold off Daniels’ suite at the stadium—an important perk. The GM finally won a four-year extension around the same time that the club’s board of directors convened for a meeting in Scottsdale.

According to a source close to key ownership within Rangers Baseball Express LLC—oilmen Ray Davis of Dallas and Bob Simpson of Fort Worth—the dustup over Daniels’ contract, and Greenberg’s last-gasp trip to re-sign Lee, were “not as big a deal” as they were made out to be. And, the source added, the troubles at the top began “not until the first of the year … and really not until February.”

When word leaked out that before spring had officially sprung, Greenberg had missed all or part of that Scottsdale board meeting—then failed to co-host a scheduled party for advertisers the next day—blood was in the water. Ryan basically told the powers-that-be that a “him or me” situation had developed. And Greenberg could not win that battle.

Ryan, Daniels, and the serious money behind Rangers Baseball Express had no intention of working “through our differences,” as Greenberg had urged. At least one owner was acutely aware of the way Jerry Jones had been reviled in Dallas early on for his treatment of Tom Landry, another Texas legend like Ryan. So Ryan would stay, and Greenberg would be offered a subordinate position that he would likely refuse. The upshot: The sports attorney from Pittsburgh was abruptly and unceremoniously sacked as Rangers CEO and replaced by Ryan.

At that, the all-knowing national media swept in to peck at the carcass. With little attribution and few specifics, somehow the affable Greenberg had just never “fit in,” they claimed. The Rangers CEO who had long deferred all baseball questions to Ryan and Daniels was a “meddler” who “ran his mouth.” The lawyer who’d recruited the financial team, forged a colossal media deal, and set the winning strategy for owning the ball club had become just a “small-timer from out of town.”

So, who was this guy Chuck Greenberg, really? Was he indeed just a meddling owner wannabe? Or was he the ideal one who merely rubbed wrong an increasingly prickly Texas legend? And, how was it that his tenure as CEO so quickly imploded?

“A Natural Leader”
To start with, we give you Marc Deflin. He was one of three inseparable pals growing up with Greenberg near the St. Clair Township outside of Pittsburgh, and perhaps now the most surprised that his childhood friend is probably selling his house in Westlake to move back home to Pennsylvania.

“Chuck was the sharpest and a natural leader, always very persistent but with a smile on his face,” Deflin says. “I remember when we were about 17. We all kind of dreamed about playing in the adult softball league—the beer league. Well, Chuck just made it happen. Next thing you know, we had a sponsor and jerseys. All Chuck wanted was to play first base and bat third in every game. Nobody begrudged him.” 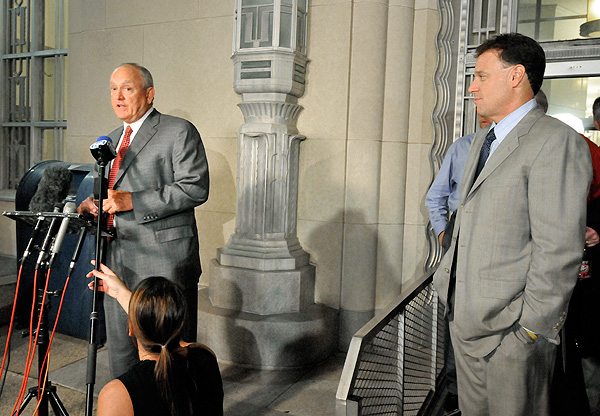 Shortly after winning the Texas Rangers in an Aug. 5, 2010, auction, Rangers President Nolan Ryan, left, addressed the media at the Fort Worth federal courthouse, as business partner Chuck Greenberg looked on. photography courtesy of Getty Images
Notice the formula? Put it all together, handle the details, everybody gets what they want. In the case of the Rangers, Greenberg wanted to invest a little money for a minority ownership position and have the title and responsibilities of a CEO. The new owners got their team and a fat new TV contract, thanks to Chuck. And that is just how it played out—for seven months, anyway.
Rangers fans have to wonder whether Greenberg’s departure will bring back the demons that haunted the franchise faithful for decades while provoking deep belly laughs from other baseball fiefdoms. After all, this is the team that featured in its annals:

– Three different managers in three days—including one that ran off to Alabama because he was homesick.

– An individual disrupting the Ranger clubhouse while in a 90-minute catatonic trance (and this was even before Dale Hansen arrived).

– A helicopter that crashed into the outfield while trying to dry the Arlington turf.

– A sportswriter comparing an outbreak of Ranger defensive miscues to a “yeast infection.”

Greenberg, if he were still talking, would tell you that it was the club’s lack of success—and its low expectations—that first piqued his fascination.

“DFW loves its sports,” he told D CEO in an interview before his ouster. “In baseball here, the bar of expectations was set low, but there were waves of talent. I saw this as maybe the biggest sleeping giant in sports.”

So he went after it.

Observers can say what they want now about Greenberg’s operational abilities, but the sports attorney rose to his position with the Rangers not because of personal wealth, but because of a wealth of experience. He had worked as outside counsel to the Pittsburgh NHL team, the Pittsburgh Penguins, and was instrumental in winning them a new arena. But it was his ownership of three minor-league baseball franchises that gave him the chutzpah and experience to approach Ryan, the face of the Rangers franchise.

Before approaching Ryan, Greenberg had been in North Texas in what he called “something of an undercover capacity.” He would interview the folks on the next barstool and question flight attendants and cabbies on their perception of the Rangers.

He met Ryan in the summer of 2009. A one-day trip turned into three days and a handshake on a partnership agreement that eventually included Greenberg becoming the team’s CEO and managing partner. To Greenberg, Ryan was the key to the deal.

“If Nolan had wanted to put his own group together, I would have dropped out,” Greenberg said. “We are different but complementary and, from the beginning, I noticed that from the minors to the front office, there was this really strong work ethic.”

By all accounts, Ryan maintains a B.S. meter that serves him as well today as his “high hard one” did during his pitching days. How he did not see his new managing partner as a hands-on guy is baffling. Ryan, through his son Reid, knew all about Greenberg’s minor-league experience. Here was a guy that advertised himself as having pulled the tarp back on rainy nights and served ice cream from the concession stands—two “very sophisticated and technical jobs” Greenberg joked.

“Greenberg was very talented, and should be credited for the majority of what got the deal done,” says the source who’s close to Rangers Baseball Express. “Whether anyone will say that or not, he was the salesman and the businessman who held it together. His record with the Pittsburgh Penguins and minor league baseball is far more compelling than anyone has made it out to be.”

Clearly, the Rangers ownership, especially Ryan, must have admired some of Greenberg’s front-office prowess. It was Greenberg, after all, who lured PGA heavyweight and chief operating officer Rick George away from the professional-golf tour and gave him the identical title with the Rangers. Together, they hired three more crucial vice presidents to oversee ticket sales and marketing. These included Executive Vice President Joe Januszewski, who was snatched up from the Red Sox to guide business partnerships and development.

A candidate who interviewed for one of the critical new positions told D CEO, “I didn’t even see Nolan Ryan. Chuck pretty much ran the meeting.”

These hires make up much of the “deep bench” on the business side that Ryan, Davis, and Simpson bragged on during their March 11 press conference to announce Greenberg’s departure. Perhaps this new leadership team, much of it assembled by Greenberg, is the reason Ryan has appeared so nonchalant about adding the CEO position to his responsibilities. The Hall of Famer has likened his new role to the one he enjoyed before the team’s August bankruptcy, when he was serving merely as club president.

A Fan-First Mentality
September and October 2010 brought giddy times to North Texas. Somehow, the bankrupt Rangers acquired one of the top pitchers in the game in Lee. Then came the far-fetched vanquishing of the hated Yankees en route to their first World Series appearance.

To see Rangers headlines around NFL playoff time is unusual for this city. More bizarre still was the chant inside Dallas Cowboys stadium: “Let’s Go Rangers!” Outright craziness was the selling of 360,000 t-shirts emblazoned with the claw (for a good play) and antlers (for speed), the offbeat symbols that quickly became 2010 Rangers trademarks.