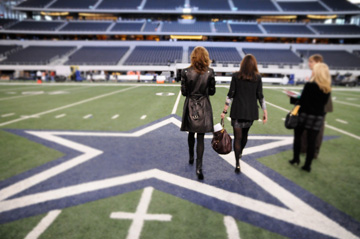 “She never brushes people off with a ‘Hi, how are you?’ and then moves on,” Murray says. “She’s so busy, but she has always taken the time. She’s got that never-be-denied attitude, and yet she does it in a very elegant and eloquent way.”

Murray smiles and says, “Sometimes you wonder, ‘What is Jerry going to do?’ [But Charlotte] always does things very tastefully.”

Charlotte served on the advisory council that won the bid to bring the NCAA Final Four to Cowboys Stadium in 2014. In September, she became the first woman to be named chairman of The Salvation Army’s national advisory board. More than once, Charlotte has been quoted as saying, “I think I was a juggler in another life.”

She teams with Dallas-based CorporateMagic Inc., to put on the Cowboys’ halftime shows for home games, lining up the performers while CorporateMagic creates the lighting, staging, and technical aspects.

Jim Kirk, CorporateMagic’s president and creative director, says, “Charlotte doesn’t just come out and turn stuff over to people and say, ‘Good luck; I hope you can make it work.’ She’s in there from the very beginning with a clear vision of what she wants.”

Kirk adds, “Before I met her, I thought, ‘Oh, I’m going to meet Jerry’s daughter.’ But when I started working with her, I never even thought about that anymore. She’s such her own lady, and so in command of what she’s doing, and has her own charisma. You never think, ‘I’m getting a little Jerry here,’ or ‘I’m getting a little of Gene.’ I’m getting Charlotte.”

She cried in her daddy’s arms the day Texas Stadium came down. And he cried, too. (Tears welled up again in the Cowboys’ Valley Ranch offices as Charlotte recalled that Saturday daybreak in April 2010, causing her to dab at the corners of her eyes.)

It’s easy to think of Texas Stadium as the place where Landry wore his fedora, Schramm barked at officials from the press box, and so many great players and teams performed during the 1970s and ’80s. The Cowboys had been labeled America’s Team long before Jones took over.

Jerry Jones says he anticipated from the beginning that the entire family would eventually get involved with the team. The NFL has a long history of family affairs—the Halas and McCaskey families in Chicago, the Maras in New York, the Rooneys in Pittsburgh, the DeBartolos and Yorks in San Francisco, and so on.

But Jerry Jones had been an oilman in Arkansas, and the family had never joined in any business venture. When a franchise is purchased, the NFL does not mail bluebooks or “How To” manuals to new owners. As Jones puts it, “There’s no dress rehearsal.” And if those new owners choose to clean house, as Jones did, then everyone really is starting from scratch.

“A lot of people go into the family business and end up working for their fathers,” Charlotte says. “But we all kind of began at the same level. All we had to do was try to do our best not to mess up. Jerry never told us, ‘You’re not doing it the right way.’ It was always, ‘Try whatever you can, and if it doesn’t work, we’ll just keep on going.’”

The Jones family did indeed move the Dallas Cowboys into a new era, dramatically increasing the franchise’s value, even though the team’s on-field successes have waned and largely disappointed its huge fan base for more than a decade now. They hear the grumblings.

“There’s always going to be people who resist and don’t like change, no matter what,” Anderson says. “And there are always going to be those who think you should constantly be reinventing yourself. You’re never going to make everybody happy.

“There are still days that you don’t want to get up and read the paper. And then there are days that you can’t wait to get up and read the paper. I don’t think that’s ever going to change. We have always tried to make decisions in the best interest of the organization, with respect for the tradition in the past, but with the future definitely in mind.”

Each member of the family had input in the new stadium in Arlington. Charlotte says, “There’s not a light switch plate or a screw in that building that we didn’t approve or select.”

She and her mother formed an arts council to choose the stadium’s artwork. Charlotte even picked out the aggregate for the sidewalks outside the stadium.

On that morning in April when Texas Stadium came down, Charlotte, her dad, and daughter joined 20,000 others, some of whom were tailgating. The Jones trio chose a spot near State Highway 183, on a rise in the Gold Lot overlooking the stadium.

“We thought it was going to be a formality,” Anderson says. “We had already done our farewell at the final game played in Texas Stadium, and our minds had been on building the new stadium.

“When Texas Stadium imploded, every concussion that went with those booms just felt like you were getting hit right in the stomach. Then it just came down, and we were crying and we were just such a mess we had to leave.”

Now an even newer tradition is being built in Arlington. But, ah, the memories.

Scott Murray says Jones has told him more than once about the time he took his daughter to meet with Dick Ebersol in New York: “Jerry said, ‘I looked at Charlotte that day and I thought, Oh my gosh, this is my daughter; that was a home run she just hit.’”

Actually, it was more of a touchdown. And Charlotte Jones Anderson isn’t done yet.