It’s 1997, and Dallas Cowboys owner Jerry Jones and his daughter Charlotte have flown to New York City for a meeting that will open his eyes about her like nothing before—or since.

After the two walk into the NBC office of Dick Ebersol and exchange niceties, Jerry slides into a chair and says, “We’re here because Charlotte has something she wants to ask you.”

Ebersol is chairman of NBC Universal Sports & Olympics, and one of the most powerful figures in television history—in or out of sports. Charlotte Jones Anderson merely needs to find a way to ask him to expand the Cowboys’ halftime show on Thanksgiving Day. And then let her produce it.

Jerry doesn’t know what to expect. He describes his feelings during that meeting as “apprehensive.” Then again, Charlotte has certainly surprised him and his wife, Gene, before.

For example, there was the time when Charlotte, while growing up in Little Rock between semesters of her sophomore year in high school, chose to transfer to another school. Longing for more diversity, she shed her safe but sheltered private-school environs in favor of Little Rock Central High, made famous a quarter-century earlier as the site of one of the country’s first major civil-rights confrontations. (President Dwight Eisenhower had to send in troops to see that black students could enter safely.)

The student body had evolved over time to become 60 percent black. Charlotte ran for student body president against the black, and vastly popular, star football running back. With 2,000 ballots cast, she lost by just four votes and in the process won over many in the student body, white and black alike.

Then there was the time upon finishing high school when she completely deserted the Arkansas womb, using an essay she wrote on the Little Rock Central High experience to help—she firmly believes—win admission to prestigious Stanford University in California. Four years later, in 1988, she received a B.S. in human biology with an emphasis in organizational management—a major unique to Stanford that included a stint with studies in Florence, Italy. 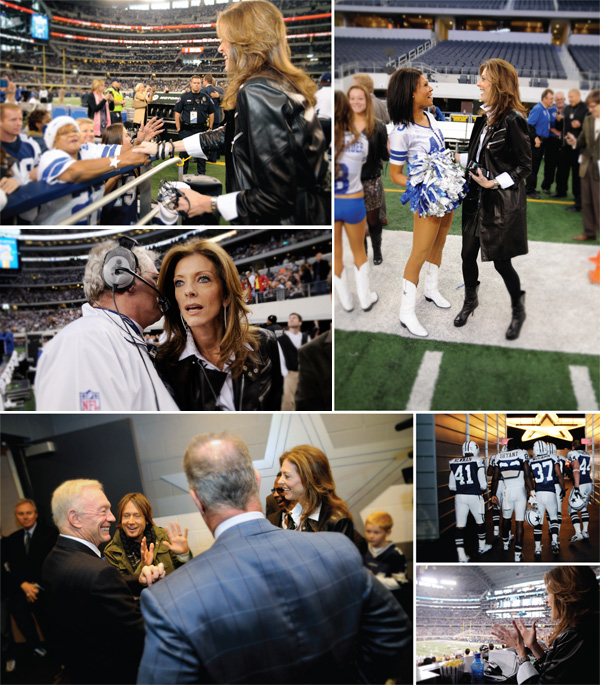 Charlotte Jones Anderson at Cowboys Stadium on Thanksgiving Day 2010. (Clockwise, from top left) Greeting fans; chatting with cheerleaders; Cowboys take the field; rooting for the home team; joking around with her father Jerry, brother Stephen, and singer Keith Urban, who performed during halftime; getting an update from a production crew member. photography by Bud Force
photography by Bud Force
Then it was off to Washington, D.C., to become the top administrative assistant for Arkansas congressman Tommy Robinson—a character, to say the least. In 1981, as Little Rock’s sheriff, Robinson had achieved national headlines by chaining 45 inmates to fences outside their cells—his way of protesting prison overcrowding. He went to D.C. as a Democrat, switched to Republican, and later announced his intention to run for governor of Arkansas. His opponent in the primaries was Sheffield Nelson, who happened to be Jerry Jones’ best friend.

It all had the makings of one fine feud for the entire Jones family. Today, Jerry says, “Tommy was controversial and very polarizing. Charlotte had to have a very thick skin to be his right-hand person in Washington. She went directly from Stanford to Washington and began mixing it up with some of the most seasoned, aggressive people that you have in this country. I can remember at times it was so tough—[her] voice was breaking when we were communicating—but man, she got toughened up and I think that experience gave her a lot of confidence.”

Dad had purchased the Dallas Cowboys in 1989 for $150 million, not one-tenth what the brand is worth today. A year later, some of the Dallas Cowboys Cheerleaders threatened a mini-mutiny, so to speak, over a rumor that Jerry was going to dress them in trashy halter tops and even trashier hot pants. Charlotte left the political spotlight, came to Dallas to clean up the matter, and took charge of America’s most famous cheerleaders.
She’s been here ever since.

By the time she flew with her dad to see Ebersol, the Cowboys had won a then-unprecedented three Super Bowls in a span of four seasons (1992, 1993, 1995). She’d married Shy Anderson, a Little Rock native, and given birth to a daughter, Haley, and a son, also named Shy. (Another son, Paxton, was born in 2001 on the day of Super Bowl XXXV in Tampa; her dad skipped that game to be with her.)

By then Charlotte had turned 30 and had also become a good deal more than president of the Dallas Cowboys Cheerleaders. In fact, seven years earlier, it was Charlotte, then in her early 20s, who convinced Jones to move the Cowboys’ training camp from its traditional location in Thousand Oaks, Calif., to St. Edward’s University in Austin, where it stayed until 1997.

Charlotte recalls, “The Cowboys had gone 1-15 in ’89 and [her father] would come by and say, ‘You know we’re losing $75,000 a day? Figure out a way to stop losing money. Turn the lights out, pick up your own trash, anything you can think of to keep the bank from coming to get this note.’ ”

St. Edward’s was a money saver. It was also a means to reconnect with fans statewide who had soured on the franchise after Jones walked in and abruptly fired legendary coach Tom Landry, then ran legendary President and General Manager Tex Schramm out the door a few months later. Charlotte worked trade-outs with Austin cleaners, made players available for local functions, and kept shaving the budget.

Now it’s 1997 and she’s in Dick Ebersol’s office, asking him to expand the Cowboys’ halftime show on Thanksgiving Day. She has already lined up country star Reba McEntire to perform. She has met with Steve Reinemund, chairman of Frito-Lay and chairman of the Salvation Army’s national advisory board. She envisions making the Thanksgiving halftime extravaganza the annual kickoff for The Salvation Army’s nationwide Red Kettle campaign.

“It would be a huge, Super Bowl-style halftime show,” she tells Ebersol, “that would captivate a national TV audience.”

According to both Charlotte and her father, Ebersol answers, “No one has ever come in here and asked for airtime. Do you know how valuable that is?”
“Well, yes,” Charlotte says. “I do.”

“I’ll tell you what,” Ebersol answers finally. “If you can get the NFL to extend the halftime, and if you can put on a show worthy of production, then I’ll air your whole show. But I have to tell you, if the show is not any good, I’m going to go to commercial. So it has to be captivating for the audience at home.”
Ebersol admitted liking the feel-good aspects of tying The Salvation Army into the Thanksgiving Day theme.

Charlotte says, “So we walked out the door and my dad looked at me and said, ‘Do you have any idea what you just got?’ And I said, ‘No! I got a national television show!’ He said, ‘You just got almost $15 million [worth] of airtime right in the heart of our game. . . . Don’t let me down!’”

Jones has repeated this story over the years. On this particular telling, he says, Charlotte “did grow right there before my eyes.”

Even so, she wasn’t finished. She convinced the National Football League to extend the halftime by seven minutes, allowing time to get the huge sets on and off the field.

“I was a nervous wreck,” she says of that first Thanksgiving show, in 1997. “I didn’t want to tell anybody, but I don’t know that I knew what I was doing. You kind of have to work your way through it, because a lot of people were counting on you for all the exposure you were going to give them.”

In the 14 years since, Anderson has remained executive director and producer of the Cowboys’ huge Thanksgiving Day halftime shows. She says that other than Super Bowl halftimes, the Cowboys’ show is the most viewed live music production on TV—winning higher ratings than even the Grammys and the Emmys. A few years after she pitched the idea to Ebersol, the league itself began producing a similar halftime show for the other annual Thanksgiving Day game, in Detroit.

Is it any wonder, then, that Charlotte Anderson also participated so avidly in North Texas’ winning bid for Super Bowl XLV, to be played Feb. 4 in Arlington? The entire Jones family attended the March 2007 NFL Owners Meeting in Nashville, including Gene. Among them were Charlotte’s brother Stephen, who at 46 is two years older and the club’s executive VP, chief operating officer, and director of player personnel. Also attending was their brother Jerry Jr., 41, executive VP/chief sales and marketing officer. Charlotte’s official title with the Cowboys is executive VP/director of charities and special events.

Cowboys legend Roger Staubach, at Jerry Jones’ request, had made Dallas-Fort Worth’s official presentation to the owners. Then, while Staubach amused the others in a nearby suite by juggling pads of butter, Jones and his family remained in the meeting. Jones gave his own impassioned speech, and the voting—anticipated to be extremely close between North Texas and Indianapolis—began.

Dr. Robert Cluck, mayor of Arlington, two years ago told Street & Smith’s SportsBusiness Journal, “I have to say that I don’t think we’d have gotten the Super Bowl if not for Charlotte.”

She prefers to credit Staubach and her father. Construction of Cowboys Stadium was running behind the new dome being built in Indianapolis, and the voting indeed was tight. Charlotte worked behind the scenes, though—as she does so often while her father and brothers remain more in the spotlight. That’s where she’s often most effective.

“The bid required huge detail and reconciliation and negotiating with the NFL about specific benefits,” Jerry says. “The night before the bid was submitted, Charlotte was up all night with our bid committee staff. And weeks prior to that owners meeting, she was involved in a lot of negotiating, a lot of give and take.”