Mike Shumsky believes in putting his mouth where his money is. The way he sees it, he can’t properly run a chain of pizza buffets if he doesn’t dine there often himself.

“I can’t do this job unless I love the restaurants I’m working for,” he says as we settle into a booth at Le Peep Grill on Midway Road in Plano.

There are relatively few customers scattered across the dining room at 8 a.m. on a Tuesday. Shumsky picked the place for its location between his home in Allen and the CiCi’s Pizza corporate office in Coppell, not because of the menu. (A typical breakfast for him is juice and yogurt consumed during his car ride to the office.) But he quickly finds a dish on the menu that tickles his fancy.

“Pancake sandwich — did you see that? I may have to try that. It sounds like it could be a pizza idea,” he says.

Shumsky is “always” looking for inspiration for unusual innovations. Shortly after joining CiCi’s in late 2009, he put himself through the company’s store management training program. Spending about a month working in daily operations, he noticed how many customers discarded pizza crusts, something that seemed a terrible waste. So he dreamed up the “take-it-to-the-edge pizza”—a pie where the sauce and cheese cover the entire surface of the dough. The company has been testing the item with success.

“About the only complaints we’ve gotten about it are a couple of ladies who said they got their fingernails dirty from the crust,” Shumsky says.
The trick is learning which new ideas will appeal to customers and, just as important, which can be executed with the same simplicity of operations that has allowed CiCi’s to offer low-cost, all-you-can-eat buffets for 25 years. With annual sales of $560 million to $700 million from about 620 restaurants, it’s a formula they’re not eager to mess with too much.

Though Shumsky is still getting to know the CiCi’s brand, he’s no stranger to the restaurant business. His previous work has included stints at Taco Bell, Sonic, and Johnny Rockets. He was retired when he and his wife chose to move to North Texas a few years ago to be closer to their children and grandchildren. But he “flunked retirement” and took a job running La Madeleine restaurants.

He’d still be working with the chain of bakery cafes if CiCi’s management hadn’t come calling. Although he “loves” the La Madeleine brand, he saw more opportunity for growth with a value-priced pizza company.

“La Madeleine is kind of a high-end, predominantly female demographic—our consumer was the wordly affluent female—and CiCi’s is basically everybody else. We provide a great experience to a much wider range of consumers,” he says. “You can build four or five CiCi’s for what it costs to build one La Madeleine. They’re a different niche.”

And building many more CiCi’s restaurants is very much in the company’s plans. In recent years, it has made inroads into places like Las Vegas, Orlando, Fla., and Southern California where it had never been before. Shumsky says the company has identified 73 markets that fit its model for expansion—spots with plenty of daytime traffic and blue-collar consumers focused on price. CiCi’s intends to nearly double its total number of restaurants just by expanding into those markets. The plan calls for 500 new units during the next eight to 10 years.

“Our consumer is the consumer most affected by the recession. Our price point of all-you-can-eat for $5 and change is a great value, but that consumer group is having a tough time,” Shumsky says. 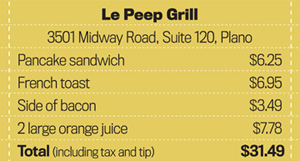 Our food arrives, and there’s some confusion. My order of French toast with a side of bacon looks (and tastes) fine, but Shumsky’s pancake sandwich looks nothing like a  sandwich. It’s simply an ordinary plate of two pancakes, scrambled eggs, and bacon. He shrugs off the discrepancy, and we finish our meal.

When we walk over to the cash register to pay, Shumsky takes the opportunity to mention the misunderstanding about the pancake non-sandwich to the manager. “Yeah, I don’t know why the menu calls it that,” the manager says. “It has never been a sandwich.”

Maybe Le Peep needs to heed this warning, before it disappoints another pancake-sandwich-seeking customer. The next guest might not be as pleasantly tempered as Mike Shumsky.