When Dallas Mayor Mike Rawlings was sworn in on a hot summer day in June 2011, he echoed the views expressed by respondents to our annual SMU Cox CEO Sentiment Survey. In his address, Rawlings spoke of the immense opportunities that our area provides, which propelled him from a newcomer to the city with just $200 in his pocket to CEO of a major U.S. corporation—and, now, mayor of one of the country’s largest cities. It is this overpowering sense of possibility and optimism in the Dallas-Fort Worth area that has shone through in our analyses even through the darkest period of the great recession.

More recently, the Texas economy has been under a microscope, ever since Gov. Rick Perry entered the presidential race touting the “Texas Miracle.” USA Today featured a cover story that proclaimed, “Need a Job? Move to Texas.” In fact, during the two-year recession, the state added 262,00 jobs, or half the nation’s 524,000 payroll gains. The DFW area continues to be a large contributor to this growth. During the last decade, the population has increased dramatically. The headquarters of 24 Fortune 500 companies in the area, and multiple new corporate relocations, have strengthened the economic development outlook. DFW is ranked fourth nationally for adding jobs in the past year. What’s more, Dallas is ranked fifth out of 65 metro areas for the best place for young adults to start a career.

This juxtaposition of a relatively strong local economy within a faltering national or even global economy was our inspiration for the title, “An Island of Optimism,” which we used to sum up the results of our survey a couple of years back. However, last year we wondered if the light at the end of the tunnel we had detected in the previous year’s survey was really a fast-approaching train. With another year to evaluate the strength of the recovery, we were eager to see how this year’s respondents felt about the economy, their businesses, and the challenges they faced leading small and large companies through the current climate of uncertainty.

LAST YEAR’S BUSINESS PERFORMANCE
We developed the SMU Cox CEO Sentiment Survey to put our finger on the pulse of our area’s business leaders in order to gauge their outlook over the coming 12 months. This time around we also decided to ask our respondents how their businesses fared last year. What we found was that, in spite of a very difficult business environment, 37 percent of CEOs reported meeting their business objectives, while another 30.2 percent exceeded them. This included meeting or exceeding their objectives in terms of profitability (61.9 percent), growth (63.8 percent), and revenue (67.5 percent). These results are a testament to the resilience and dynamism of our region’s economy, as well as the dedication and skill of the leaders and employees of the organizations in our sample of respondents. 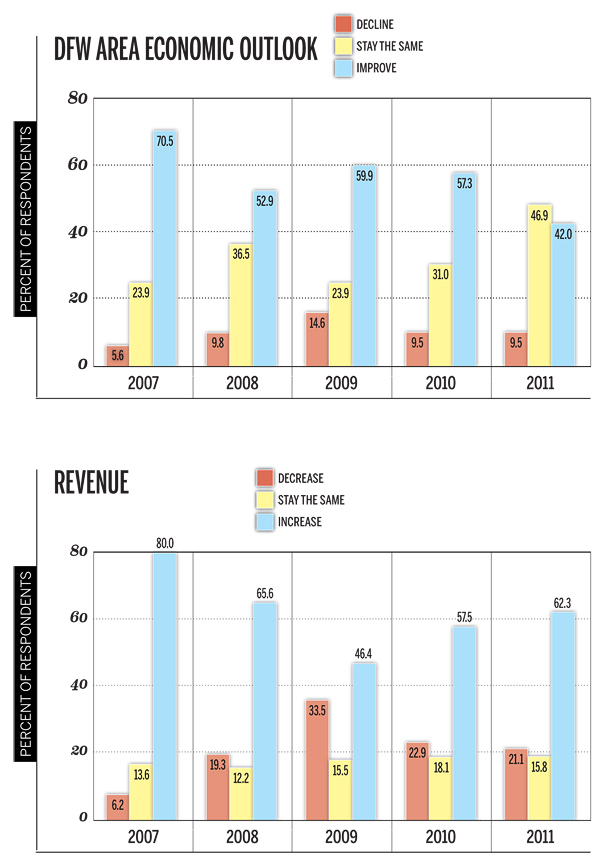 ECONOMIC OUTLOOK
With all the bad news coming out of the euro zone, it is not surprising that our CEOs were pretty pessimistic about the prospects for the world economy. In fact, our results revealed the worst outlook we have ever recorded, with 59.5 percent of respondents expecting a decline in the world economy over the next 12 months (compared with 31.3 percent a year ago), 29 percent expecting no change, and only 7.6 percent believing that things will improve (a year ago, 29.6 percent expected an improvement). Of course, a slowdown in the world economy will dampen growth here at home through a decline in our exports.

The outlook for the U.S .economy was a little better, but still at record low levels. Of our respondents, a record 40 percent of DFW-area CEOs expect the U.S. economy to decline next year (compared to 31 percent last year). This number is higher than what we recorded during the depths of the recession in 2008. Only 13.6 percent expect economic conditions to improve in the U.S., a record low and well below the 33 percent who expected improvement last year. The only consolation was that a plurality of respondents, 44.8 percent, expect the U.S. economy to remain the same over the next 12 months. Of course, the same is not exactly good, given the high level of unemployment and anemic levels of growth we have seen over the past couple of years.

Our previous surveys have always revealed a more upbeat outlook for the economy in the DFW area among CEOs when compared to the world or the U.S., and that was the case again this year. Of our respondents, 42 percent expect our region’s economy to improve (the lowest level we have recorded and down from 57.3 percent last year), a plurality or 46.9 percent expect conditions to remain the same, and only 9.5 percent expect a deterioration.

In all, this year’s respondents see dark clouds gathering over the economic landscape. If one looks at the results of our survey since we began collecting data in 2007, one can’t help but feeling like we are riding a roller coaster. Unfortunately, we are currently on the steepest downward trajectory after experiencing a slight upturn following the plunge in 2008. We all better hang on tightly for the ride.

OUTLOOK FOR DFW AREA BUSINESSES IN 2012
Given the relatively gloomy outlook for the economy, one would think that CEOs would expect their businesses to suffer. While it is true that 67 percent of our respondents see their costs going up over the next 12 months, a vast majority (62.3 percent) also expects their revenue to increase. This is a higher percentage than last year (57.5 percent) and substantially higher than the low recorded in 2009 when only 46.4 percent expected their revenues to go up. The net result is that 49.9 percent of respondents anticipate increases in overall profitability. This represents an improvement from last year’s 47.6 percent, but is still short of our all-time high of 62 percent recorded in 2007. It must be said, however, that a substantial number (27.2 percent) expect their profits to decrease over the coming year.

There is also positive news when one considers other aspects of organizational health and vitality. For example, most respondents expect to either maintain (51.5 percent) or increase (25.9 percent) their training budgets. Few (16.6 percent) expect decreases in their staffing levels, while a substantial 34 percent will be adding to their payrolls. Also, in spite of national trends showing a decrease in household wages over the past 10 years, our respondents expect wages in their organizations to either remain flat (46.7 percent) or actually increase (46.7 percent) over the coming 12 months. Finally, CEOs are still reinvesting in their businesses, with 44.5 percent expecting to maintain their current levels of capital expenditures and another 30.1 percent seeking increases.

EVALUATING THE DFW AREA
It is in our solidly thriving community that 55.5 percent of our leaders believe the best growth opportunity exists for their companies next year. In fact, 43.9 percent of our respondents indicated that more than 75 percent of their sales come from the DFW area. Yet when we ask them how they would rate the overall quality of the DFW workforce, 57.6 percent listed it as only “adequate.” When asked what local political leaders can do to improve the business environment in our region, two major factors zoomed to the top of the list: increasing financial incentives for businesses (45.6 percent), and improving public school education (24.8 percent).

Rawlings, the Dallas mayor, must have heard that same concern while campaigning. In his initial days in office he pledged to rapidly improve the new business development approval and permit process, and to create an “army of volunteers” and “private-sector donors” who will support needed changes in the Dallas Independent School District. Although both pledges can produce the desired changes, the ability to make it happen could prove difficult, since the slow economy contributes to reduced city funding and staffing. However, his work as the Dallas “Homeless Czar” showed his ability to succeed with a “can-do” attitude.