Shortly after 8 a.m. on a hot and muggy morning in late July, thousands of women jammed the foyer outside Hall A of the Dallas Convention Center. They were there for the Mary Kay Emerald Seminar, one of five consecutive three-day conventions the company holds each summer in Dallas.

Inside the arena, rock music blared, a fog machine was pumping, and two dozen dancers filled the stage. Women in business attire began screaming like preteen girls at a Jonas Brothers concert. But they weren’t just excited about the song-and-dance on stage; they were on fire for Mary Kay.

Top-selling sales consultants—each raking in at least $125,000 in commissions during the past year—were trotted out onstage. Then came the handful of “Mary Kay Millionaires” who have brought in seven-digit-plus commissions during their time with the cosmetics firm. The No. 1 seller for the Emerald Seminar, Gloria Mayfield Banks, took the mic: “How many of you came here to reignite your dream?” she asked, then urged the crowd to look to their friends and encourage them to, “Dream big!”

The audience was nearing church revival-pitch when Mary Kay president and CEO David Holl stepped up to the podium and announced his goal to hit $5 billion in annual revenue by the Addison-based company’s 50th anniversary—just three years away. It’s double the $2.5 billion the company generated in 2009, but Holl is a true believer. “I know to never underestimate the power of a woman, a passionate woman on a mission,” Holl said.  “Never underestimate the power of a passionate company on a mission.”

When he’s not igniting evangelistic fervor among the Mary Kay faithful, Holl maintains a low profile, despite having been at the helm of the multibillion-dollar company since 2006. When asked, many Dallas executives have a hard time recalling the name of Mary Kay’s CEO, incorrectly assuming the person at the top is Richard Rogers, son of the company’s late founder Mary Kay Ash. (Rogers serves as executive chairman.) More often, they assume the top officer is a woman.

It is likely that Ash, who died in 2001, would have approved of Holl’s promotion to the CEO post. Rhonda Shasteen, former chief marketing officer at Mary Kay, says Ash “would never put a woman in that position just because she was a woman. In Mary Kay’s personal life, men were put into positions just because they were men, not because they were best person for job. She set about to have a company that wouldn’t do things that way. David is the CEO because, at that moment in time, when that decision needed to be made, [he was] the best person for the job.” 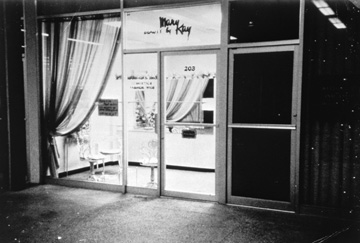 Holl says he gets “the man question” a lot. “My answer is kind of simple,” he says. “I have a strong wife, I have three daughters; it was fate that I was going to work at a company for women.”

Looking back, Holl says he had no indication his career path would lead to the cosmetics empire. Born in 1960 in Decatur, Ill., the son of a lifelong General Electric employee, Holl and his four siblings grew up in New York and South Carolina. He went to Clemson University and graduate school at the University of South Carolina Moore School of Business. Then, in an attempt to flee the state and make some money, Holl took an oilfield job in Houston. He hated it.

“After six months, I wanted to leave, but my dad was still working [at GE] and had been there for 38 years; he said, ‘Why don’t you give it a year?’ So I gave it 11 months before I left and came [to North Texas] to work for Citibank,” Holl says. He and his wife, Suzanne, lived in Dallas, then moved to New York before settling in Denver. In the early 1990s, Suzanne’s father became ill, and the Holls moved back to Dallas to be near him. During that time, an executive recruiter friend of Holl’s told him about an open finance position at Mary Kay.

“I’ll be the first to admit, when I was in graduate school, not once did I think I would be working for a cosmetics company, much less a direct-selling cosmetics company; that wasn’t a big goal of mine,” he says. “I was happy at Citibank … so the fact that I wasn’t dying to have the job helped the whole process. I think [other job candidates] recognized it up front, but it took me until once I got here before I realized the opportunity that I stepped into.”
Holl knew of Mary Kay Inc. from his work as a banker—the cosmetics conglomerate had enjoyed a decent reputation after its $450 million leveraged buyout in 1985—and he learned about the strength of the company’s culture when he read one of Mary Kay Ash’s books, Mary Kay on People Management. But little did Holl know when reading that book that he’d one day take over the company Ash created.

With only about 4,500 corporate employees worldwide, Mary Kay’s business model revolves around the work of its so-called “independent sales force,” which consists of an estimated 600,000 “independent beauty consultants” in North America and a total of 2 million consultants in more than 35 markets worldwide. In general terms, the tiered system begins with the beauty consultants on the bottom, then directors, and national sales directors. There are about 450 national sales directors worldwide.

Beauty consultants typically hold parties where potential customers sample products. Because each consultant is in business for herself, she’s able to mark up Mary Kay products to whatever price point she chooses. Lipstick, for example, usually costs a consultant about $6, but the suggested retail price is $12, thus allowing Mary Kay corporate to say its sales team regularly makes a 50 percent commission.

After beauty consultants “share the opportunity” with outsiders and transition them from customers into salespeople (commonly referred to as the consultant’s “offspring”), and when an undisclosed revenue point is reached, the consultant is on her way to becoming a director. It’s a complicated system, with specific requirements and rewards for each level. Some consultants may qualify for items like costume jewelry, whereas a national sales director may earn the right to drive a signature pink Cadillac Escalade (in what equates to a two-year lease paid by the company). It’s a business model that works: The consultants purchase the inventory directly from Mary Kay Inc., and the company doesn’t have to worry about carrying the costs of 2 million employees.

Many of the company’s success stories come from women who pursued a career selling Mary Kay in an effort to support their families or create new lives for themselves. Karen Piro started selling Mary Kay in 1975 and rose through the ranks to become an independent executive national sales director (the “executive” comes from the fact that Piro helped several other members of her group achieve national sales director status).

When Piro began selling Mary Kay in Iowa, the company was relatively unknown in that part of the country. “I wore my Mary Kay pin and people thought it was my name,” she says. “The world was my oyster and I had a reputation to build. Now I have a reputation to protect.”

After Piro and her family relocated to Dallas 18 years ago, she continued to build her business. (Mary Kay does not give beauty consultants geographic boundaries, so it’s every woman for herself, anywhere in the country.) Piro has earned lifetime commissions totaling more than $10 million. The money is good, and a far cry from the salary she earned as a second-grade teacher in Iowa, but Piro says her job satisfaction comes from the leadership role she plays within her unit.

“It’s like guiding a volunteer army, really, because it’s their business,” Piro says of her recruits. “I don’t have to hire people or fire people. I’m nobody’s boss; I’m just here to guide and mentor.”

After 35 years with Mary Kay, Piro maintains that Holl’s leadership is taking the business in the right direction.

“He’s one of those rare individuals who has business savvy, great character, and people skills all rolled into one,” Piro says of Holl. “We’re so glad he is perpetuating Mary Kay’s dream.”

Those are exactly the characteristics Holl brings to his community service work, says Cathy Bryce, immediate past president of the YWCA of Metropolitan Dallas, where Holl is a longtime board member. “He is wise, thoughtful and deliberate—a very knowledgeable leader,” Bryce says. “When he is involved, he adds value immediately and consistently.”

“He is just not full of himself at all. Sometimes that’s a challenge, when you’re the head of a company as large and successful as Mary Kay,” Bryce says. “He’s refreshingly authentic—a treasure of a leader in Dallas. He quietly makes a difference. It’s never about David.”