WHY ARTIN’S GRILL: As we opened the door, a savory burst of hickory wood smoke hit us in the face. Our hostess steered us through a handsome dining room replete with towering stacked stone columns, mahogany booths, and masculine abstract art. Nestled in a cozy two-person booth lit by an amber glass sconce, my lunch companion leaned forward and whispered, “Toto, I don’t think we’re in Plano anymore.”

I know what he meant. The suburbs are often more Happy Meal than haute cuisine. But not so in Plano. At the tony Shops at Legacy development, one can feast on Korean, Turkish, and Thai any night of the week. Celebrity chefs Kent Rathbun and Tre Wilcox have found a culinary home in Plano. Now add up-and-comer Christopher Short to that list. Formerly of Bella in Uptown, Short has traveled far north to Artin’s Grill, where his approachable New American fare is the perfect accompaniment to the restaurant’s subdued sophistication. 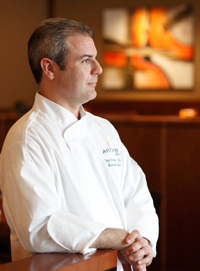 Chef Christopher Short. photography by Kevin Marple
photography by Kevin Marple
WHAT TO EAT: Back to that smoke. It dominates Artin’s menu. Everything seems to be “hardwood grilled” just short of the desserts. Happily, that woodsy flavor only enhances, never getting in the way of Short’s fare, an approachable stable of classics with just enough surprising touches to keep foodies and the less adventurous equally content. Take for instance,  the appetizers. At first glance, it’s a humdrum list: calamari, spinach-artichoke dip, nachos. Yawn. But those same nachos piled mile high are littered with meaty morsels of beef short rib. Avocado-cumin cream elevates the bar food staple to return-visit status. Sandwiches and entrées are the same. Cilantro pesto mayo on the chicken salad sandwich. Red beet mashed potatoes and parsnips with the arugula chimichurri chicken.  A side of “drunken” mushrooms cooked in Jim Beam and Cabernet. Pappardelle bolognese worthy of any Italian kitchen.

Get the picture? Short’s menu isn’t complicated. In fact, one gets the feeling that with his pedigree, the talented chef could stand to flex his culinary prowess a bit more. Then again, there’s absolutely nothing wrong with simple food cooked exceedingly well. With Artin’s surf and turf, you get exactly what you expect: a hickory grilled petite filet with smoked bacon-wrapped shrimp and roasted garlic mashed potatoes. No surprises. Just happy palates.

With so many high-concept restaurant openings—where trendy ingredients and aggressively exotic flavors seem to be the gimmick du jour—it’s easy to overlook the charm of a place like Artin’s Grill. Sometimes all you need is memorable yet familiar fare in a handsome setting. Oh, and a good whiff of smoke. That doesn’t hurt either.

THE FOOD: New American classics
THE COST: Average lunch entrée price $15
WI-FI: No
FULL BAR: Yes
WHO’S THERE: HP Enterprise Services and Frito Lay execs
THE POWER TABLE: Elevated booths along the south end of the restaurant provide the best perch from which to see and be seen.

Get more information about Artin’s Grill.